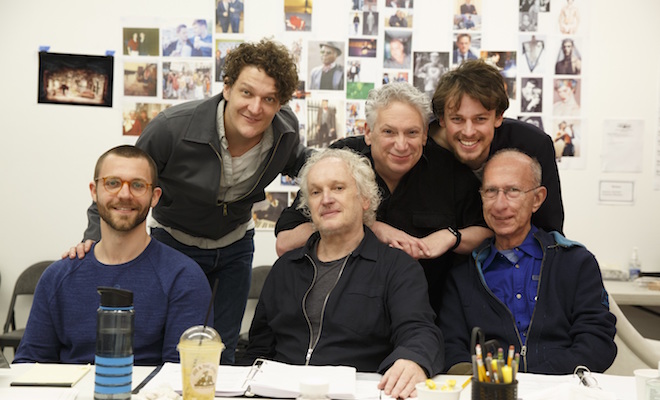 Public Theatre Begins Previews of ‘Gently Down The Stream’

THE PUBLIC THEATER
BEGINS PREVIEWS
FOR WORLD PREMIERE OF
GENTLY DOWN THE STREAM
TUESDAY, MARCH 14

February 27, 2017 − The Public Theater (Artistic Director, Oskar Eustis; Executive Director, Patrick Willingham) will begin previews for the world premiere of GENTLY DOWN THE STREAM on Tuesday, March 14. Written by Martin Sherman and directed by Sean Mathias, the show has been extended one week through Sunday, April 23, with an official press opening on Wednesday, April 5.

Continuing The Public’s mission to make great theater accessible to all, The Public’s First Performance “Free for All” returns. Free tickets to the first preview on Tuesday, March 14 will be available March 7, via TodayTix mobile lottery.

Public Theater Member and Partner tickets, as well as single tickets starting at $85, can be accessed now by calling (212) 967-7555, visiting www.publictheater.org, or in person at the Taub Box Office at The Public Theater at 425 Lafayette Street. Joe’s Pub at The Public serves food nightly, but there is no food or drink minimum for THE OUTER SPACE.

Tony winner Harvey Fierstein takes the stage in a ravishing world premiere by one of the most influential playwrights of our time, Tony nominee Martin Sherman. Fierstein plays Beau, a pianist expat living in London, who meets Rufus, an eccentric young lawyer, at the dawn of the internet dating revolution. After a life spent recovering from the disappointment and hurt of loving men in a world that refused to allow it, Beau is determined to keep his expectations low with Rufus. But Rufus comes from a new generation of gay men who believe happiness is as much their right as anyone else’s, and what Beau assumed would be just another fling grows into one of the most surprising and defining relationships of his life. A remarkably moving, brilliantly funny love story, GENTLY DOWN THE STREAM reflects the triumphs and heartbreaks of the entire length of the gay rights movement, celebrating and mourning the ghosts of the men and women who led the way for equality, marriage and the right to dream.

MARTIN SHERMAN (Playwright) was born in Philadelphia; his early plays include Passing By, Cracks and Rio Grande, all presented by Playwrights Horizons in New York. His play Bent was first presented at The Royal Court in London with Ian McKellen, then on Broadway with Richard Gere, revived at The National Theatre in London, again with Ian McKellen, and on the West End with Alan Cumming. It has been performed in over sixty countries. Later plays include Messiah, A Madhouse In Goa, When She Danced (the last two starring Vanessa Redgrave on the West End), Some Sunny Day and Onassis. Rose premiered at the National Theatre, with Olympia Dukakis, before transferring to Broadway. He wrote the book for the musical The Boy From Oz. His screenplays include The Summer House, Alive And Kicking, Bent, The Roman Spring Of Mrs. Stone and Mrs. Henderson Presents. He has been nominated for two Tony, two Olivier’s and two BAFTAS.

SEAN MATHIAS (Director) is a British theatre director, film director and writer. He has worked at the Royal National Theatre, the West End, the Kennedy Center, The Mark Taper Forum, Off-Broadway and many times on Broadway, as well as Paris, Sydney, Cape Town, Johannesburg and Los Angeles. He has written a number of plays including the award winning A Prayer for Wings, and the screenplay for the award winning BBC film The Lost Language of Cranes. In 2009/2010 Mathias was the Artistic Director of Theatre Royal Haymarket and his legendary production of Waiting for Godot played two seasons at the theatre, as well as touring the UK and internationally. In 2013 Mathias directed and co-produced Two Plays in Rep, comprising Beckett’s Godot and Pinter‘s No Man’s Land on Broadway at the Cort theatre. His production of NO Man’s Land, starring Ian McKellen and Patrick Stewart, toured the UK in 2016 before transferring to Wyndham’s Theatre. Mathias has just directed a stage version of The Exorcist, which will transfer to the West End in the autumn of 2017. Mathias directed the award winning film Bent.

GABRIEL EBERT (Rufus) has appeared on Broadway in Casa Valentina by Harvey Fierstein at MTC; Matilda the Musical by Tim Minchin and Dennis Kelly, for which he received a 2013 Tony Award for Best Featured Actor in a Musical; Brief Encounter by Noël Coward; and Therése Raquin by Helen Edmundson; and Red by John Logan. His Off-Broadway and regional credits include Peer Gynt by Henrik Ibsen; Preludes by Dave Malloy; The Heart of Robin Hood by David Farr; Suicide, Incorporated by Andrew Hinderaker; 4,000 Miles by Amy Herzog, the recipient of a 2011 OBIE Award; and Prometheus Bond by Stephen Sater and Serj Tankian. His film and television credits include the upcoming The Immortal Life of Henrietta Lacks, directed by George Wolfe; Ricki and the Flash, directed by Jonathan Demme; The Family Fang, directed by Jason Bateman; the pilot of “The Interestings” directed by Mike Newell; and “Jane Wants a Boyfriend” directed by Will Sullivan.

HARVEY FIERSTEIN (Beau) won Tony Awards for his portrayal of Arnold in Torch Song, and his starring role as Edna in the musical Hairspray. Other notable Broadway roles include Tevye in Fiddler on the Roof, and Albin in the revival of La Cage Aux Folles. TV credits include “Nurse Jackie,” “The Good Wife,” “How I Met Your Mother,” “Family Guy,” and “The Simpsons.” Films include Mrs. Doubtfire, Independence Day, Death to Smoochy, and Bullets Over Broadway.

CHRISTOPHER SEARS (Harry) has appeared Off-Broadway in The Harvest at LCT3; Stupid Fu**ing Bird at The Pearl; London Wall at Mint Theater; and how I learned to become a Superhero at the Apothecary Theatre Company. His regional credits include One Man, Two Guvnors at the Pioneer Theatre Company; Third at Two River Theater Company; and Lord of the Flies at Barrington Stage Company. His film and television credits include The ADK; “Royal Pains”; “The Michael J. Fox Show”; and “Law & Order: SVU.”

The Public Theater, under the leadership of Artistic Director Oskar Eustis and Executive Director Patrick Willingham, is the only theater in New York that produces Shakespeare, the classics, musicals, contemporary and experimental pieces in equal measure. Celebrating his 10th anniversary season at The Public, Eustis has created new community-based initiatives designed to engage audiences like Public Lab, Public Studio, Public Forum, Public Works, and a remount of the Mobile Unit. The Public continues the work of its visionary founder, Joe Papp, by acting as an advocate for the theater as an essential cultural force, and leading and framing dialogue on some of the most important issues of our day. Creating theater for one of the largest and most diverse audience bases in New York City for nearly 60 years, today the Company engages audiences in a variety of venues—including its landmark downtown home at Astor Place, which houses five theaters and Joe’s Pub; the Delacorte Theater in Central Park, home to free Shakespeare in the Park; and the Mobile Unit, which tours Shakespearean productions for underserved audiences throughout New York City’s five boroughs. The Public’s wide range of programming includes free Shakespeare in the Park, the bedrock of the Company’s dedication to making theater accessible to all; Public Works, an expanding initiative that is designed to cultivate new connections and new models of engagement with artists, audiences and the community each year; and audience and artist development initiatives that range from Emerging Writers Group and to the Public Forum series. The Public is located on property owned by the City of New York and receives annual support from the New York City Department of Cultural Affairs; and in October 2012 the landmark building downtown at Astor Place was revitalized to physically manifest the Company’s core mission of sparking new dialogues and increasing accessibility for artists and audiences, by dramatically opening up the building to the street and community, and transforming the lobby into a public piazza for artists, students, and audiences. The Public is currently represented on Broadway by the Tony Award-winning acclaimed American musical Hamilton by Lin-Manuel Miranda, and in Spring 2017, Lynn Nottage’s acclaimed new play Sweat. The Public has received 59 Tony Awards, 168 Obie Awards, 53 Drama Desk Awards, 54 Lortel Awards, 32 Outer Critics Circle Awards, 13 New York Drama Critics Awards, and five Pulitzer Prizes. www.publictheater.org.

GENTLY DOWN THE STREAM begins previews in The Public’s Martinson Theater on Tuesday, March 14 and has been extendced one week through Sunday, April 23, with an official press opening on Wednesday, April 5.

Public Theater Member and Partner tickets, as well as single tickets starting at $85, can be accessed now by calling (212) 967-7555, visiting www.publictheater.org, or in person at the Taub Box Office at The Public Theater at 425 Lafayette Street.

The Library at The Public is open nightly for food and drink, beginning at 5:00 p.m., and Joe’s Pub at The Public continues to offer some of the best music in the city. For more information, visit www.publictheater.org.