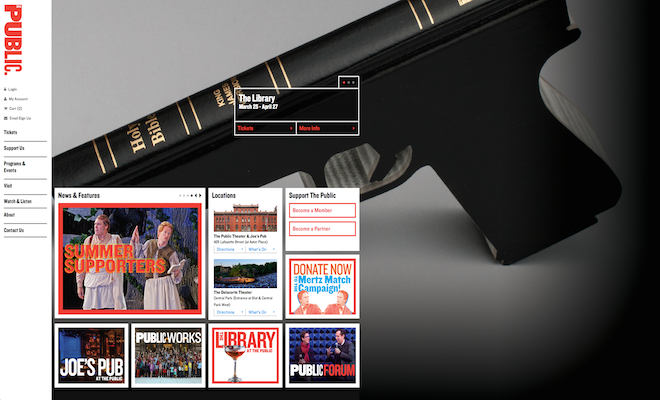 New Site Made Possible By A Grant From
The LuEsther T. Mertz Charitable Trust

Designed By Pentagram
With Production By Adage Technologies

March 25, 2014 – The Public Theater (Artistic Director, Oskar Eustis; and Executive Director, Patrick Willingham) will launch a new, state-of-the-art website this month. The site, building upon the recent revitalization of The Public’s downtown home at Astor Place, establishes a dynamic and engaging digital home at Publictheater.org. The LuEsther T. Mertz Charitable Trust, a long-time funder and supporter for two generations, has awarded The Public a grant supporting this effort and the creation and implementation of innovative field-leading business strategies for The Public Theater. The grant, intended to help ensure the future viability of the institution, includes funds for the redesign and re-launch of Publictheater.org which now incorporates joespub.com and shakespeareinthepark.org.

“This grant – totaling $3 million in direct support and an additional $1 million to be matched –continues to build upon the extraordinary vision of LuEsther T. Mertz which began over four decades ago with her support of Joe Papp and The Public Theater.  We are extremely grateful to The LuEsther T. Mertz Charitable Trust for their unwavering support and generosity,” said Executive Director Patrick Willingham. “Our new website, Publictheater.org, is just one example of how the Trust is helping The Public enter the next phase of its life as a sustainable, mission driven institution. We hope more audiences will discover and re-discover The Public Theater just by visiting our new site.”

With the launch of the new website, The Public now showcases all programs and events in one digital space, with separate websites joespub.com, shakespeareinthepark.org, among others, seamlessly folded into the institution’s main website, Publictheater.org. Built in Responsive Design, an optimal viewing and interaction experience on mobile phones, tablets, and computers, Publictheater.org features easy access to details about all events and productions in every venue, ease of purchases to all shows in the same transaction and increased opportunities for donors to support The Public via a number of options for online contribution. Designed by Pentagram under the direction of Partners Paula Scher and Eddie Opara, with full production work by Adage Technologies, the new website will officially launch on March 27 after a limited soft-launch period.

The LuEsther T. Mertz Charitable Trust has challenged The Public to match a portion of its grant with an additional $1 million in new funding from other supporters. The new website allows patrons to help leverage this gift by contributing to the Mertz Match Campaign at Publictheater.org. Supporters can participate in the matching grant challenge in several ways:  make a donation of any amount; add the suggested donation to their cart when making a purchase on the website; or adding a ‘round up’ donation to the end of a purchase – all of those dollars go directly to the campaign. These matching gifts will help support The Public’s ongoing mission of arts and culture for all. For questions about this matching campaign or to support The Public Theater by contributing to The LuEsther T. Mertz Matching Challenge Grant, please visit Publictheater.org.

“The LuEsther T. Mertz Charitable Trust has been the backbone of The Public Theater for over two generations,” said Artistic Director Oskar Eustis. “Their wisdom, guidance, and generosity have made all the difference to The Public: without them, we would be a shadow of what we are. Back in 1975, LuEsther personally made our transfer of A Chorus Line to Broadway possible; in the decades since, the Trust that bears her name has stood by us, in success and in challenge, to continue the work she cherished. Our deepest thanks to the Trustees and to LuEsther, models of what philanthropy can and should be.”

THE LUESTHER T. MERTZ CHARITABLE TRUST is named for The Public’s former Board Chair LuEsther T. Mertz who served in this capacity for 14 years alongside founder Joseph Papp. Mrs. Mertz remained The Public’s chief benefactor during her lifetime. Today, the Trust bearing her namesake continues to make philanthropic investments in honor of her legacy. The Mertz Trust has provided leadership support to The Public Theater for nearly 25 years, including a major contribution for the establishment of the institution’s endowment. They provided significant funding to The Public’s recent capital campaign and associated rededication events in 2012 to celebrate the renovation’s completion. Today, the LuEsther T. Mertz Charitable Trust continues to make significant investments to ensure The Public’s future growth as a leading cultural organization in New York and around the world.

PENTAGRAM is the world’s largest independent design consultancy. In the two decades since Designer Paula Scher first developed the visual identity for The Public Theater, The Public’s graphics have become a familiar presence in New York and a kind of visual shorthand for “theater” itself. Her work has included the design of hundreds of posters for Public Theater productions and the annual free Shakespeare in the Park performances in Central Park, and most recently, environmental graphics for the renovation of The Public’s downtown home at Astor Place. The new Public Theater website designed by Pentagram’s Eddie Opara extends this exuberant visual brand into a dynamic online presence that uses eye-catching images and intuitive navigation to promote and celebrate The Public’s mission as a theater for the “public.”

ADAGE TECHNOLOGIES is a Chicago-based web development firm founded in 2001 that develops custom websites and apps for organizations with an eye on long-term solutions. Adage utilizes forward-thinking technology and superior code to forge dynamic partnerships with performing arts groups and venues to build their brand, engage audiences and sell tickets. Adage Technologies has also designed websites for other esteemed cultural institutions including Boston Symphony Orchestra, The Adrienne Arsht Center for the Performance Arts of Miami-Dade County, and The Cleveland Orchestra.

Under the leadership of Artistic Director Oskar Eustis and Executive Director Patrick Willingham, The Public Theater is the only theater in New York that produces Shakespeare, the classics, musicals, contemporary and experimental pieces in equal measure. The Public continues the work of its visionary founder, Joe Papp, by acting as an advocate for the theater as an essential cultural force, and leading and framing dialogue on some of the most important issues of our day.  Creating theater for one of the largest and most diverse audience bases in New York City for nearly 60 years, today the Company engages audiences in a variety of venues—including its landmark downtown home at Astor Place, which houses five theaters and Joe’s Pub; the Delacorte Theater in Central Park, home to its beloved, free Shakespeare in the Park; and the Mobile Unit, which tours Shakespearean productions for underserved audiences throughout New York City’s five boroughs. The Public’s wide range of programming includes free Shakespeare in the Park, the bedrock of the Company’s dedication to making theater accessible to all; Public Works, a new initiative that is designed to cultivate new connections and new models of engagement with artists, audiences and the community each year; new and experimental stagings at The Public at Astor Place, including Public Lab; and a range of artist and audience development initiatives including its Public Forum series, which brings together theater artists and professionals from a variety of disciplines for discussions that shed light on social issues explored in Public productions.  The Public Theater is located on property owned by the City of New York and receives annual support from the New York City Department of Cultural Affairs; and in October 2012 the landmark building downtown at Astor Place was revitalized to physically manifest the Company’s core mission of sparking new dialogues and increasing accessibility for artists and audiences, by dramatically opening up the building to the street and community, and transforming the lobby into a public piazza for artists, students, and audiences. Key elements of the revitalization included infrastructure updates to the 158-year old building, as well as construction of new exterior entry stair and glass canopy; installation of ramps for improved accessibility; an expanded and refurbished lobby; the addition of a mezzanine level with a new restaurant lounge, The Library at The Public, designed by the Rockwell Group. The LuEsther T. Mertz Charitable Trust provides leadership support for The Public Theater’s year-round activities.  www.publictheater.org