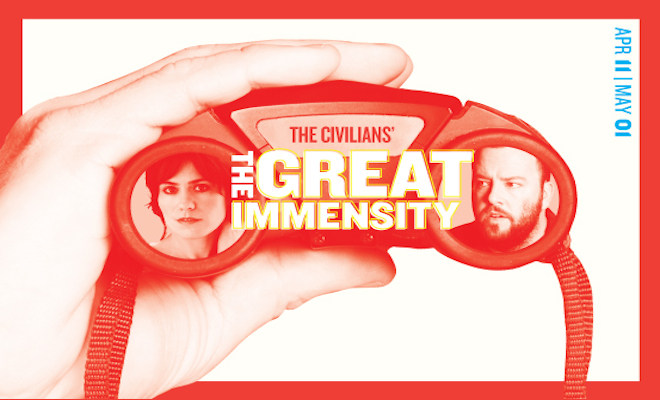 THE PUBLIC THEATER BEGINS PREVIEWS FOR THE CIVILIANS’ THE GREAT IMMENSITY
ON FRIDAY, APRIL 11

Written and Directed by Steve Cosson
With Songs by Michael Friedman

All Tickets To This Public Lab Production Only $20

March 28, 2014 – The Public Theater (Artistic Director, Oskar Eustis; Executive Director, Patrick Willingham) will begin previews for the New York premiere of The Civilian’s THE GREAT IMMENSITY on Friday, April 11. Written and directed by Steve Cosson with songs by Michael Friedman, THE GREAT IMMENSITY is a highly theatrical look into one of the most vital questions of our time: how can we change ourselves and our society in time to solve the enormous environmental challenges that confront us? THE GREAT IMMENSITY will run through Thursday, May 1 in the Martinson Theater, with an official press opening on Thursday, April 24.

All tickets for this Public Lab production are only $20 and are on sale now. Tickets can be purchased by calling (212) 967-7555, www.publictheater.org, or in person at the Taub Box Office at The Public Theater at Astor Place at 425 Lafayette Street. The Library at The Public is open nightly for food and drinks, beginning at 5:30 p.m., with brunch on select weekends, and Joe’s Pub at The Public continues to offer some of the best music in the city.

In a thrilling and timely production, presented in association with the celebrated investigative theater company, The Civilians, THE GREAT IMMENSITY is a continent-hopping thriller following a woman, Phyllis, as she pursues her husband Karl who disappeared from a tropical island while on an assignment for a nature show. Through her search, Phyllis uncovers a mysterious plot surrounding the upcoming international climate summit in Paris. As the days count down to the summit, Phyllis must decipher the plan and possibly stop it in time.

Now in its seventh season, Public Lab provides audiences with access to new work and Shakespeare with tickets priced at $20, and provides emerging and established artists with a platform to further develop their work on stage an in performance with scaled-down productions (shorter rehearsal periods and smaller budgets) that allow audiences and artists to engage with one another in the process of making theater.

STEVE COSSON (Writer, Director) co-wrote and directed the Public Lab production of Paris Commune at The Public. His recent credits include Mr. Burns, a Post-Electric Play; Paris Commune at BAM Next Wave; Spring Awakening at the Olney Theatre; The Great Immensity at Kanas City Rep; Anne Washburn’s A Devil at Noon at the Humana Festival; and Bus Stop at Kansas City Rep. He is the founding Artistic Director of The Civilians, whose original works of theatre have been performed Off-Broadway and in over 40 cities nationally and internationally. The Civilians’ highlights include In the Footprint, The Beautiful City, (I Am) Nobody’s Lunch, and Gone Missing.

MICHAEL FRIEDMAN (Songs) recently wrote the music and lyrics for The Public Theater’s Shakespeare in the Park production of Love’s Labour’s Lost; as well as for Bloody Bloody Andrew Jackson; the music for Romeo and Juliet; The Seagull; Cymbeline; and is the co-author of Paris Commune, which was also performed at the BAM Next Wave Festival. He also wrote the music for Fortress of Solitude, currently at the Dallas Theatre Center, which will be a part of The Public’s 2014-15 season. As a founding associate artist of The Civilians, he has written music and lyrics for This Beautiful City; In the Footprint; Gone Missing; (I Am) Nobody’s Lunch; and Canard Canard Goose? and music for Anne Washburn’s Mr. Burns, A Post-Electric Play. He has been a MacDowell Fellow, Princeton Hodder Fellow, Barron Visiting Professor at the Princeton Environmental Institute, and an artist-in-residence at Spring Workshop Hong Kong. He performed in a Lincoln Center’s American Songbook concert of his songs and received an Obie Award for Sustained Achievement.

DAMIAN BALDET (Harold, Peter) has appeared on Broadway in Machinal and in the National Tour of The Lion King. He has also appeared Off-Broadway in The Civilians’ production of Gone Missing, which he also co-wrote. His additional New York credits include Frankenstein, (I Am) Nobody’s Lunch, and Canard Canard Goose? His regional credits include Hoover Comes Alive, Sweet Bird of Youth, Blood Wedding, and A Midsummer Night’s Dream

CINDY CHEUNG (Allie, Emanuelle) has appeared Off-Broadway in Sides: The Fear is Real and Middletown. Her additional New York credits include Speak Up Connie, The Sugar House at the Edge of the Wilderness, Goodbye Cruel World, The Seagull, and The Karaoke Show. Her film and television credits include Lady in the Water, Spider Man 2, “Homeland,” “Blue Bloods,” “Made in Jersey,” “Bored to Death,” “White Collar,” and “One Life to Live.

DAN DOMINGUES (Bonifacio, Marcos, Charlie) has appeared Off-Broadway in The Jammer, The Cherry Orchard, Night Sky, His Greatness, King Lear, Cymbeline, and in New York in The Coffee Trees, Masquerade, and Who Popped Papi Chulo? which he also co-wrote and produced. His film and television credits include Chasing Taste, “Gossip Girl,” “Royal Pains,” “Law & Order,” “Hope & Faith,” and “Third Watch.”

REBECCA HART (Phyllis) was a member of The Public Theater Shakespeare Lab and has appeared in New York in Dead City, Vendetta Chrome, Lila Cante, Love Sucks, Struck, The Devil & Tom Walker, Nights & Fights, Phenomenon, and Jazz Desert. Regionally, she has appeared in Son of a Gun; The Devil at Noon; Orestes, A Tragic Romp; Prozak & The Platypus; and A Girl’s Life.

CHRIS SULLIVAN (Karl) has appeared on Broadway in Nice Work If You Can Get It, Lombardi, and Chicago. His television credits include “The Knick”; “The American”; “Law & Order: SVU”; “Elementary”; and “A Gifted Man.”

ERIN WILHELMI (Julie) has appeared Off-Broadway in The Great God Pan at Playwrights Horizons. Her film and television credits include Jamie Marks Is Dead, The Perks of Being a Wallflower, Disconnect, The English Teacher, “Taxi Brooklyn,” “The Knick,” and “Gossip Girl.”

The Civilians is an artist-led company that creates new theater from creative investigations into the most vital questions of the present. Through a number of artistic programs, The Civilians advances theater as an engine of artistic innovation and strengthens the connections between theater and society. Since its founding in 2001, the Obie Award-winning company has supported the creation of 13 original shows. The Civilians’ work has been produced at numerous theaters in New York, including Vineyard Theatre and Barrow Street Theater; nationally at Center Theatre Group, HBO’s US Comedy Festival, Studio Theatre, Actors Theatre of Louisville, and more; and internationally. Recently, Mr. Burns: A Post-Electric Play opened at Playwrights Horizons to rave reviews and sold-out audiences, and was included in 8 Top 10 of 2013 lists, including The New York Times. The Civilians’ work is published by Dramatists Play Service, Oberon Books, Ghostlight Records, and Playscripts, Inc

Under the leadership of Artistic Director Oskar Eustis and Executive Director Patrick Willingham, The Public Theater is the only theater in New York that produces Shakespeare, the classics, musicals, contemporary and experimental pieces in equal measure. The Public continues the work of its visionary founder, Joe Papp, by acting as an advocate for the theater as an essential cultural force, and leading and framing dialogue on some of the most important issues of our day.  Creating theater for one of the largest and most diverse audience bases in New York City for nearly 60 years, today the Company engages audiences in a variety of venues—including its landmark downtown home at Astor Place, which houses five theaters and Joe’s Pub; the Delacorte Theater in Central Park, home to its beloved, free Shakespeare in the Park; and the Mobile Unit, which tours Shakespearean productions for underserved audiences throughout New York City’s five boroughs. The Public’s wide range of programming includes free Shakespeare in the Park, the bedrock of the Company’s dedication to making theater accessible to all; Public Works, a new initiative that is designed to cultivate new connections and new models of engagement with artists, audiences and the community each year; new and experimental stagings at The Public at Astor Place, including Public Lab; and a range of artist and audience development initiatives including its Public Forum series, which brings together theater artists and professionals from a variety of disciplines for discussions that shed light on social issues explored in Public productions.  The Public Theater is located on property owned by the City of New York and receives annual support from the New York City Department of Cultural Affairs; and in October 2012 the landmark building downtown at Astor Place was revitalized to physically manifest the Company’s core mission of sparking new dialogues and increasing accessibility for artists and audiences, by dramatically opening up the building to the street and community, and transforming the lobby into a public piazza for artists, students, and audiences. Key elements of the revitalization included infrastructure updates to the 158-year old building, as well as construction of new exterior entry stair and glass canopy; installation of ramps for improved accessibility; an expanded and refurbished lobby; the addition of a mezzanine level with a new restaurant lounge, The Library at The Public, designed by the Rockwell Group. The LuEsther T. Mertz Charitable Trust provides leadership support for The Public Theater’s year-round activities.  www.publictheater.org