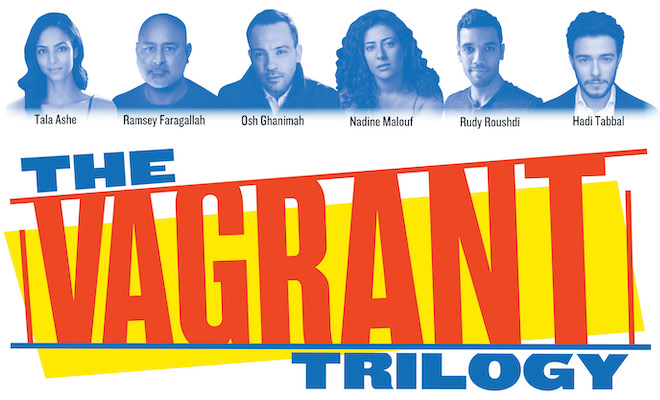 “Ten years ago, when I started writing in earnest, I submitted Urge for Going to The Public Theater for its Emerging Writers Group. I had no idea how much this program would influence the writing of the three plays that make up THE VAGRANT TRILOGY,” said Playwright Mona Mansour. “Later, I was given a commission to write The Vagrant, and Jesse Alick and Jeanie O’Hare helped me craft that ‘middle’ play, distilling it from a full two hours to the fever dream it is now. All through that 10-year process, I felt an unflagging support for the scope, material, and politics of these plays from Oskar Eustis. I’m not unaware of how daring it is for him to program this: plays that feature Palestinians at the center are extremely rare in the American theater landscape. Frankly, it shouldn’t be so ‘daring,’ but it is. And I’ve always felt the rightness of this incredible home.”

Mona Mansour, award-winning playwright and alumna of The Public’s Emerging Writers Group, delves into the Palestinian struggle for home and identity in THE VAGRANT TRILOGY, a single epic story told in three parts. In 1967, Adham, a Palestinian Wordsworth scholar, goes to London with his new wife to deliver a lecture. When war breaks out at home, he must decide in an instant what to do—a choice that will affect the rest of his life. The two parts that follow explore alternate realities based on that decision. Each part in the trilogy speaks to the others, together painting a rare and moving picture of Palestinian displacement and a refugee’s life of permanent impermanence. Featuring six actors in 19 different roles, Mansour’s drama spans four decades and three generations of a family uprooted by war and politics. Obie Award winner and Drama Desk Award nominee Mark Wing-Davey directs this sweeping new epic about the poetry and pain of losing the place called home.

THE PUBLIC is theater of, by, and for all people. Artist-driven, radically inclusive, and fundamentally democratic, The Public continues the work of its visionary founder Joe Papp as a civic institution engaging, both on-stage and off, with some of the most important ideas and social issues of today. Conceived over 60 years ago as one of the nation’s first nonprofit theaters, The Public has long operated on the principles that theater is an essential cultural force and that art and culture belong to everyone. Under the leadership of Artistic Director Oskar Eustis and Executive Director Patrick Willingham, The Public’s wide breadth of programming includes an annual season of new work at its landmark home at Astor Place, Free Shakespeare in the Park at The Delacorte Theater in Central Park, the Mobile Unit touring throughout New York City’s five boroughs, Public Forum, Under the Radar, Public Studio, Public Works, Public Shakespeare Initiative, and Joe’s Pub. Since premiering HAIR in 1967, The Public continues to create the canon of American Theater and is currently represented on Broadway by the Tony Award-winning musical Hamilton by Lin-Manuel Miranda. Their programs and productions can also be seen regionally across the country and around the world. The Public has received 59 Tony Awards, 178 Obie Awards, 53 Drama Desk Awards, 56 Lortel Awards, 34 Outer Critic Circle Awards, 13 New York Drama Critics’ Circle Awards, and 6 Pulitzer Prizes. publictheater.org

THE VAGRANT TRILOGY will begin performances in The Public’s LuEsther Hall on Tuesday, March 17 with a Joseph Papp Free Preview. It will run through Sunday, April 26 with an official press opening on Wednesday, April 1.

Public Theater Partner and Supporter tickets are available now. Full price tickets will be available on Thursday, January 16. Tickets can be accessed by calling (212) 967-7555, visiting publictheater.org, or in person at the Taub Box Office at The Public Theater at 425 Lafayette Street.

Continuing The Public’s mission to make great theater accessible to all, The Public’s Joseph Papp Free Preview initiative will continue this fall; free tickets to the performance on Tuesday, March 17 will be available beginning March 11 via TodayTix mobile lottery, and on March 17 via the lottery in the lobby of The Public Theater at Astor Place, with entries starting at 11:00 a.m. and winners drawn at 12:00 p.m. (Noon).