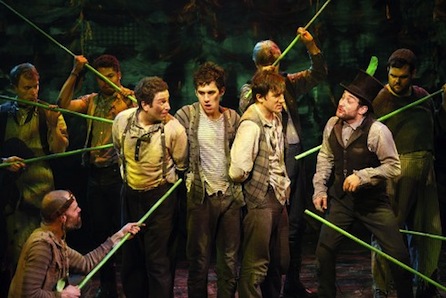 “PETER AND THE STARCATCHER” BEGINS ITS FINAL WEEKS

LAST CHANCE TO “CATCH” IT BEFORE

SAIL AROUND THE COUNTRY New York, NY (October 3, 2013) – The producers of Peter and the Starcatcher announced today that the audience and critics’ favorite will play its final performance at New World Stages on Sunday, January 12, 2014, after almost two years, five Tony Awards, and 645 performances (both on Broadway and  at New World Stages).  Written by Tony Award nominee Rick Elice and directed by Tony® Award-winner Roger Rees and Tony® Award-nominee Alex Timbers, Peter and the Starcatcher opened on Broadway on April 15, 2012 and ran until January 20, 2013, before beginning performances at New World Stages (340 West 50th St.) on Monday, March 18, 2013.

Fans around the country can still see Peter and the Starcatcher, which recently embarked on its First National tour and will play cities including Los Angeles, San Francisco, Houston, Washington DC, Chicago, and more.

“Peter and the Starcatcher has been such an incredible journey for all involved,” lead producers Nancy Nagel Gibbs, Greg Schaffert, Eva Price and Tom Smedes said in a statement.  “We’re so proud that we were able to preserve — both Off Broadway and on tour — the magic and imagination that made us fall in love with this show, and that the audiences and critics loved so much on Broadway.  And in the current Broadway landscape, a nearly two year run of a new American play is rare, so we’re grateful to the show’s many fans for embracing us like they have.”

Peter and the Starcatcher won five 2012 Tony Awards (the most of any play of the 2011-2012 season) and was named one of New York Times, New York Magazine and New Yorker’s Top 10 Shows of the Year.

This imaginative prequel to the story of Peter Pan, based on The New York Times best selling Disney-Hyperion novel by Dave Barry and Ridley Pearson, tells the tale of an orphan who heads to a faraway land, where he finds love, friendship, and, ultimately, himself. Peter and the Starcatcher is comprised of a company of twelve actors playing more than a hundred unforgettable characters, all on a journey to answer the century-old question: How did Peter Pan become The Boy Who Never Grew Up?  This epic origin story of one of popular culture’s most enduring and beloved characters proves that an audience’s imagination can be the most captivating place in the world.