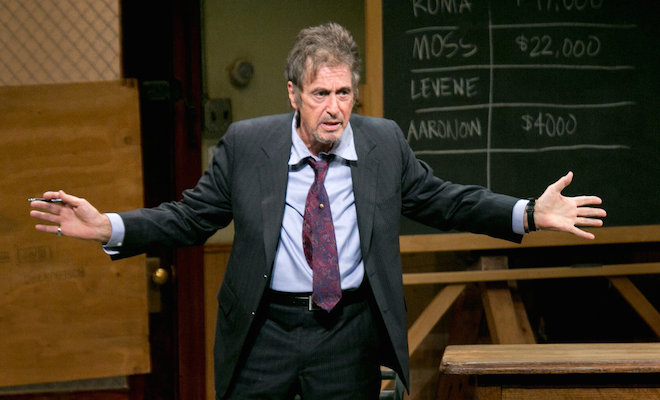 PACINO BACK ON BROADWAY

Producers announced this week that mega-movie star Al Pacino will be returning to the Great White Way next fall in David Mamet’s latest play China Doll.

According to Mamet: “China Doll is a play about a wealthy man, his young fiancé, and an airplane. The man has just bought a new plane as a wedding present for the girl. He intends to go into semi-retirement, and enjoy himself. He’s in the process of leaving his office, and is giving last minute instructions to his young assistant. He takes one last phone call…” He adds, “The characters are Mickey Ross, a billionaire; Carson, the assistant, and a telephone. I wrote it for Al. It is better than oral sex.”

These are bold (and graphic) words from the playwright who is known for his fast-paced dialogue and take-no-prisoners approach to writing. China Doll marks the sixteenth time that Mr. Mamet’s work will be presented on Broadway, having most recently brought us the revival of Glengarry Glen Ross, The Anarchist, and A Life in the Theatre.

Mr. Pacino is also no stranger to the Broadway stage. He boasts an impressive resume that dates back to 1969 when he appeared in Does a Tiger Wear a Necktie? Since then, Pacino has mostly appeared in classic theater, starring in King Richard III, Salome, and The Merchant of Venice.

Mamet mentions that with China Doll, he “wrote it for Al.” The duo has worked together several times before – with last year’s Glengarry Glen Ross revival, and 1983’s American Buffalo. Pacino also starred opposite Jack Lemmon in the film version of Glengarry Glen Ross, where he was nominated for an Academy Award.

While the rest of casting for China Doll has yet to be announced, producers have said that acclaimed director Pam MacKinnon will direct Mamet’s latest work. MacKinnon’s most recent production, A Delicate Balance, begins Broadway previews this week. Previous productions include Broadway’s 2012 Who’s Afraid of Virginia Woolf? revival and Clybourne Park.

If any of Mr. Pacino’s previous Broadway endeavors are any indication, China Doll is bound to be a hit at the box office. Tickets were next to impossible to get for Glengarry Glen Ross and Merchant of Venice, as Pacino proved to be an enormous draw for theater goers. The moral of the story? Pay attention to when tickets go on sale, and grab them early. After all, according to Mamet, “It is better than oral sex.”