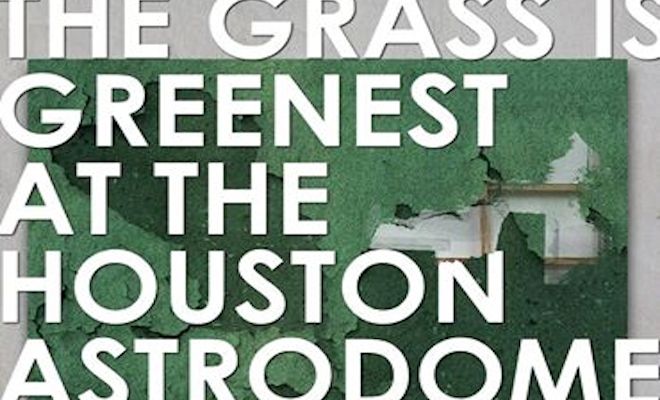 Michael Ross Albert, who celebrates his third original work in the New York International Fringe Festival over the years, succeeds again with his latest work, The Grass Is Greenest at the Houston Astrodome.  Directed by Brandon Stock, and produced by Outside Inside, a group made up of mostly graduates of the Actors Studio Drama School, the production is a perfect example of the style the Actors Studio prides itself on, and one that Albert shines in.  The playwright has a knack for infusing his naturalistic dialogue with hints of poetics and hard-hitting social commentary.

The play takes place moments after Caroline (an excellent Kathleen O’Neal) has destroyed all of the artwork in an exhibit her work had been shown in.  She was upset that her “friend” Marshall’s (an equally excellent Greg Carere) piece was purchased for over three hundred dollars.  She cannot understand why, of all the displayed pieces of art that that was the only one purchased.  The manager of the gallery, Amy (Kaitlyn Samuel) plays referee amongst the group as she tries to clean up the devastation even though it is her last night, as the gallery will be closing its doors permanently.  The fights are either postponed, or more times than not, fueled by commentary from the gallery’s intern, Pablo (David Gazzo).  As the discussions of art turn to discussions of personal relationships, John (Jimmy Dailey) comes in to complicate things.

The plays greatest strength is the subtle, nuanced performances by O’Neal and Carere.  Ms. O’Neal has a profound emotional instrument that she taps into when necessary, while still maintaining excellent comedic timing.  She is a stunning performer who commands the stage like a warrior.  Carere is a dark and brooding presence on stage, with so much going on in his eyes with so little being said.  Gazzo is a comedic genius. Each line delivery incites a belly laugh and is a welcome relief from the intense moments.

With such a realistic play, it is unclear why there were so many light shifts, often causing shadows on the actors to the point of not being able to see their faces at all.  Also, a forced emotional climax sticks out after such powerful realistic performances, but Astrodome is an example of Fringe at its best.

Ken has served as director, actor, guest artist and dramaturg internationally and throughout the United States. He received his BFA in Acting from the University of Wisconsin- Stevens Point and his MFA in directing from the Actors Studio Drama School. www.kenurso.com