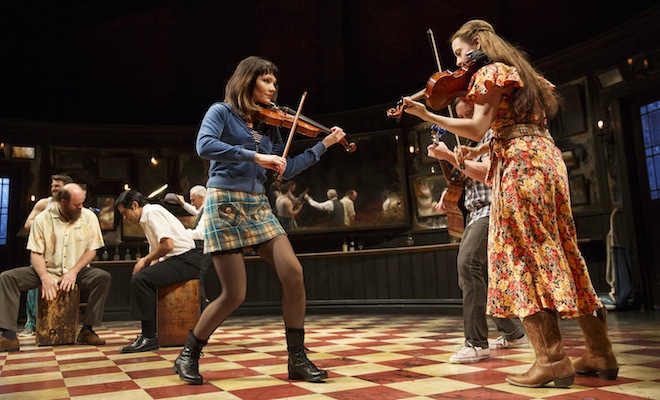 In it’s second year  on Broadway, the eight-time 2012 Tony Award winning show, including Best Musical, Once is still going strong. Once the Musical tells the compelling and heartwarming story of a Dublin street musician who’s about to give up on his dream of music when a beautiful young woman takes a sudden interest in his songs. As their chemistry grows, his music soars while their unlikely connection turns out to be deeper and more complex than your average love story.  Once the Musical is a great show for theatergoers, especially those visiting New York City. It is a brand people are already familiar with as it’s based upon the movie of the same name, but Once the Musical is its own unique experience and stands on its own. One does not need to see the movie prior to seeing the Broadway show.  With an interactive set, beautiful music, a talented group of ensemble actors/musicians, and a live intimate experience one can only get at a Broadway show, Once the Musical also features a universal theme of love and going after your dreams. The music, by Glen Hansard and Marketa Irglova, is a great mixture of genres and features the Academy Award winning song “Falling Slowly,” fits the story.  What makes Once The Musical so interactive is that prior to the start of the show, audience members are allowed on stage to have a drink and mingle with the cast members. Only a handful of musicals in the past have done something similar and I find this to  be a truly unique experience to have. Just think, if you go see Once The Musical, you will be able to go home and tell your friends how you were able to not only see a Tony Award winning Broadway show, but you got to stand on a Broadway stage and drink with the cast. That aspect alone would truly make your New York theatrical experience a special one.

Another aspect of Once The Musical that is different than other musicals is that the actors are also the musicians in that they all play an instrument in addition to acting. I know of two other shows that have done this in the past and it’s an interesting concept. This style allows the audience to see yet another dimension to these performers that they might not Winner of 8 Tony awards Once is one of the most unique and enjoyable experiences here on Broadway today “deeper and more complex then your average love story” normally get to see if there were a traditional rchestra.  Finally, the set and costumes of Once The Musical, constructed by Bob Crowley, fills out the theatre nicely. It’s been  constructed so even in a big Broadway house, there is still an intimate feeling created. The tables, chairs, counters, flooring  all seem authentic to what would really be seen in an Irish pub. With so many options for musicals on Broadway to see, Once The Musical should be on your list. It’s an experience you’ll remember for a lifetime. Once The Musical plays at the Bernard B. Jacobs Theatre in NYC (242 West 45th Street, between Broadway and 8th Avenue).