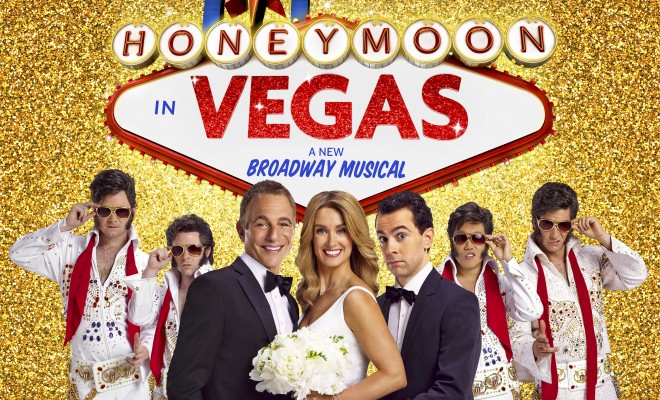 The cast of Honeymoon in Vegas has started rehearsals for what is sure to be one of the most exciting Broadway arrivals this season.

The honeymoon ain’t over. In fact, it’s just getting started. The new blockbuster Broadway musical Honeymoon in Vegas starts previews in a month – November 18th to be exact – and the buzz surrounding the production is all pointing to Honeymoon being the big hit of the season.

Based on the 1992 film starring Nicholas Cage, Sarah Jessica Parker, and James Caan, Honeymoon in Vegas follows the story of Jack Singer and his girlfriend Betsy. After years of hemming and hawing, Jack finally agrees to marry Betsy, and the couple heads off to Vegas for their nuptials. Enter rich gambler Tommy Korman who takes a liking to Betsy. When Tommy offers to erase Jack’s large gambling debt in exchange for a weekend alone with Betsy, all bets are off.

This musical version stars Tony Danza in the Caan role of Tommy. Danza is no stranger to the Broadway stage – in fact, this is his fourth appearance on the Great White Way. Danza previously appeared in The Producers, The Iceman Cometh, and A View From The Bridge. Joining him in Honeymoon are Rob McClure and Brynn O’Malley as Jack and Betsy, respectively, as well as a large ensemble of singers and dancers befitting a big “Vegas” musical.

But the real star of the production might actually end up being the music. Jason Robert Brown (The Bridges of Madison County, Parade) penned the score for this brand new musical. Mr. Brown seems to be on a roll lately, with Madison County last season, a filmed adaptation of 13 coming next year, and his original score to the play You Can’t Take It With You on Broadway right now.

Honeymoon in Vegas played an out of town run at New Jersey’s prestigious Paper Mill Playhouse prior to its Broadway arrival. Reviews of the regional run were extremely positive, which bodes well for Honeymoon in a Tony season where Best New Musical is definitely up for grabs. Honeymoon’s main competition – Sting’s The Last Ship, and Public Theater transfer Fun Home – are certain to give it a run for its money, but a January opening gives Honeymoon plenty of time to work out any kinks before its debut.

Honeymoon is being directed by Gary Griffin, who last directed on Broadway with 2005’s The Color Purple and 2006’s The Apple Tree. Tickets are currently on sale at the box office at the Nederlander Theatre.