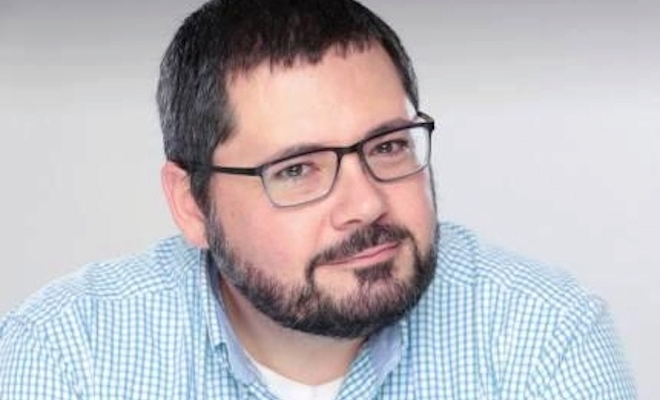 Stagelight Magazine sat down with New York Shakespeare Exchange’s Artistic Director Ross Williams to get the scoop on Shakespearean pub crawls, a bloody bloody Titus Andronicus, and what makes them one of New York’s hottest young theater companies.

STAGELIGHT: New York Shakespeare Exchange is in the middle of its fifth season. Why do you think you’ve been so successful where other theater companies have not?
ROSS WILLIAMS: It’s nice to hear you say that we’re successful! When I started the company, I didn’t know if we were going to make it that far. I didn’t know if we were going to make it past one year. But one of the mantras we’ve had, with my board and with my staff, is “behave like the theater we want to become”. So we just set out to be competitive. I also just found a really strong support network with my board and staff, and they have kept me sane, and kept me from throwing in the towel. And then I would also give huge props to our artists. Somehow we’ve gotten lucky enough – or skilled enough – to attract really good people, and they want to keep working with us. That makes a huge difference. And now, five years in, we are really turning a corner. We’re getting a ton more recognition from the arts community and the press, and it feels like we are about to hit a major growth spurt. We are on the hunt for new backers and board members who believe in our mission, and we are doing everything we can to increase our visibility.

SL: One part of NYSX’s mission statement is “to expand the reach of the art form within new and existing audiences”. How do you reach those new audience members?
RW: That’s the question. Every new theater company faces this. It’s really really really hard. With our budget restraints and performing under the union Showcase code, we’re only able to reach 1500 audience members at the most in a year through traditional programming. So we expanded to other formats like the Sonnet Project and ShakesBEER to get to people more easily and more readily.

SL: Why don’t you talk about the Sonnet Project a little bit?
RW: We are right in the middle of it, and it’s been an incredible ride so far. We are producing 154 short films, one for each of Shakespeare’s sonnets. And each one takes place in a different historic or cultural location throughout the five boroughs of New York. And each one stars a different actor, and almost all of them have a different director. The goal of the project, from an artistic standpoint, is to find a contemporary North American expression of Shakespeare’s sonnets, and find a way to make them feel particularly North American. So I always think about them as combining the poetry of Shakespeare with the poetry of New York City. It’s been incredibly rewarding. We’ve released 77 films out of 154. The project is now being used as an educational tool in New Orleans, Indianapolis, New Jersey, a high school in India… so we’re expanding our brand and our scope by creating these films.

SL: What about Shakespeare’s Globe?
RW: Yeah, what an insane turn of events! We are now partnering with Shakespeare’s Globe in London as part a new digital platform they’ll be announcing soon. There’s not much I can say about it at this point, but the one thing we can reveal is that it will absolutely bring a lot more visibility to our project. And the benefit of being associated with a company like The Globe is just unbelievable. I’m especially excited for all of our actors and filmmakers. There are over 500 artists donating their time and talents to The Sonnet Project. They’ve been so generous. Anything we can do to get their work more exposure is fantastic.

SL: You’re current season seems to be eclectic and ambitious.
RW: That’s right. We do a reading series called “Two Plays, One Conversation”, where we bring two plays together – usually one is classical in nature and the other is contemporary – and we run them in rotating rep. And after every performance we have a talkback and try to get people to discuss how the play relates to them and, if they got to see both shows, how these shows relate to one another. This year we are pairing Troilus and Cressida with a new play based on the “Pyramus and Thisbe” myth. Then for our full production in February of Titus Andronicus, I’m directing it – I really wanted to pick a play that was speaking to me. SL: And why does Titus speak to you?
RW: At first it didn’t. But after awhile, it got under my skin, and I couldn’t stop thinking about it. I got a little obsessed with what these characters are saying. In so many productions, all you ever read about is blood, and effects, and gore. But I love the language, and I love the characters. I’m fascinated by the idea that people don’t think this is a very good play, because there is a lot of really intense, emotive meat to the show. The thing that I was drawn to immediately is that the play begins with the potential of democracy. The people are demanding to throw away the royal lineage and elect their own leader. The people in power decide that’s not a good idea, and they stick with the royal lineage. And then all hell breaks loose. So it immediately spoke to me about what happens when a society starts disregarding the voice of the people… which I feel like is happening a lot in the United States right now. And, of course, Shakespeare takes it to huge extremes, and we see lots of blood, death, and destruction.

SL: Do you think it’s possible to relay this story to a modern audience without the special effects, like blood and gore?
RW: I think that in any production, you have to honor the stagecraft that is written into the play. I can’t direct a production of Titus Andronicus without blood. But there are theatrical ways to do it that can make the blood and violence a part of the world, but not the focus of the play. And we have some really amazing designers on board doing some really incredible stuff already. I’m really excited, but I’m not going to give away any secrets.

SL: So tell me about ShakesBEER.

RW: Well, the other thing we do, which is tied into that mission of trying to find new audiences, is our ShakesBEER Shakespearean Pub Crawl. They started about three years ago as an experiment, and they’ve turned into a massive near-institution in New York City now. We’re doing ten this year, and we usually get a turnout of about 100 people per crawl. Basically, we go from bar to bar for one afternoon – we hit four bars – and the price of admission gets you four performances, four drinks, and a curated pub crawl. And what we’ve found is that it’s one of the closest things in the United States to the “groundling” experience in Shakespeare’s Globe, where the artist and Shakespeare’s language are directly relating with the audiences. We find ways for people to interact very actively. It’s a really great cast of actors. So that’s one of our best ways of finding and reaching those new audiences.