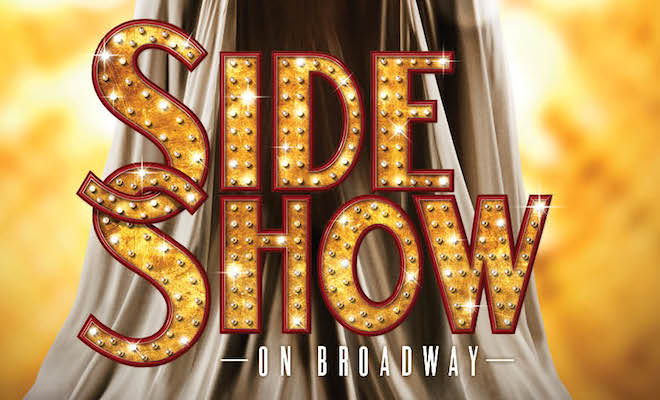 NEW CAST RECORDING OF “SIDE SHOW ” TO BE RELEASED

New York, NY (October 2, 2014) – The all-new Broadway cast recording of Side Show will be released on Broadway Records in early 2015, producers announced today.    Boasting Side Show’s legendary and beloved score, which now includes new music, and featuring the acclaimed vocal performances of the recently-revealed Broadway cast of the upcoming, totally reimagined production, the new original Broadway cast recording of Side Show will be produced by six-time Grammy Award® winning producer Frank Filipetti and will be released in the theater, stores and on iTunes in early 2015.   The CD is available now for pre-order at http://www.broadwayrecords.com/cds/side-show-2014

Under the direction of Academy Award® winning director Bill Condon, making his theatrical debut, Side Show will begin previews performances at Broadway’s St. James Theatre on Tuesday, October 28 with an official Opening Night on Monday, November 17.

Broadway Records has quickly become one of the premier record labels in its industry.  From cast albums for major Broadway shows (i.e. the Grammy® nominated Matilda The Musical) to the preservation of shorter run Broadway shows (i.e. Bonnie & Clyde), Broadway Records believes in delivering the best cast recordings to its customers.  BroadwayWorld.com recently nominated 19 of Broadway Records’ albums for their inaugural 2014 Album Awards. In addition to the emphasis on delivering first rate sound on all recordings, Broadway Records believes strongly in the entire cast album experience including packing the cast album booklets with a plethora of photos from the show, lyrics and more. Broadway Records strives to innovate with the critically acclaimed “Live at 54 BELOW” series featuring top Broadway stars including Patti LuPone, Aaron Tveit, Norbert Leo Butz, Sierra Boggess, Laura Benanti and many others.  Broadway Records is a strong supporter of the next generation of talent including albums from up-and-coming composers such as Drew Gasparini and Michael Mott. Visit www.broadwayrecords.com for more information.

The cast of Side Show features Erin Davie and Emily Padgett, who reprise their leading roles as Violet and Daisy Hilton, will be Matthew Hydzik as Buddy Foster, Robert Joy as Sir, Ryan Silverman as Terry Connor, and David St. Louis as Jake.  The ensemble of side show characters will include Brandon Bieber as the 3 Legged Man, Matthew Patrick Davis as the Geek, Charity Angel Dawson as the Fortune Teller, Lauren Elder as the Venus di Milo, Javier Ignacio as the Dog Boy, Jordanna James as the World’s Tiniest Woman, Kelvin Moon Loh as the Half-Man Half-Woman, Barrett Martin as the Human Pin Cushion, Don Richard as the Reptile Man, Blair Ross as the Bearded Lady, Hannah Shankman as the Tattoo Girl, Josh Walker as the World’s Tiniest Man, with Brandon Andrus, Con O’Shea-Creal, Derek Hanson, Michaeljon Slinger and DeLaney Westfall.

Side Show is inspired by the remarkable true story of the Hilton twins, Daisy and Violet, who were legends in their time and the highest paid performers on the vaudeville circuit. Side Show is their heartwarming search for first love and acceptance amidst the spectacle of fame and scrutiny under the spotlight.