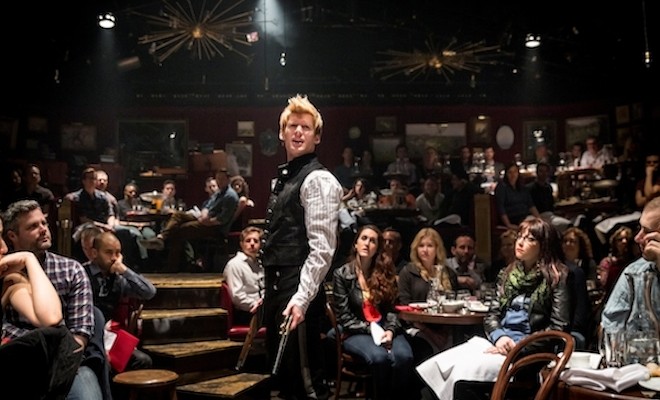 The Most Innovative Off-Broadway show of the season Natasha, Pierre & The Great Comet of 1812 is a must see!

It’s not every day that you walk to your show and end up standing in front of the type of tent you imagine Bill Gates uses for camping.  Itís also quite another thing to walk into said tent and realize youíve entered into a well appointed Russian salon with period paintings on the walls and impressive chandeliers dangling from about.  Should you find yourself in this situation then, you lucky dog, you must be seeing Natasha, Pierre & the Great Comet of 1812.  Adapted from the first half of Leo Tolstoyís forest depleting work of legend ìWar & Peace,î the story invites you into the fiery sudeuction of Natsha, fiance to the prince, by the Moscovian playboy Anatoli.

The show first played at ARS Nova, an Off-Broadway non-profit devoted to developing and producing theatre, before moving to Kazino, in Manhattanís swanky meat-packing neighborhood.  After recieving rave reviews from theatre critic heavyweights like Charles Isherwood of the New York Times and Michael Schulman of the New Yorker, the production chose 45th St, in the center of the Theatre District, as its new home.  Easily the most innovative on or off-broadway show this season, Natasha, Pierre & The Great Comet of 1812 is one theatrical experience that you wont want to miss!

Related ItemsNatashaNatasha Pierre and the great comet of 1812Off-Broadway