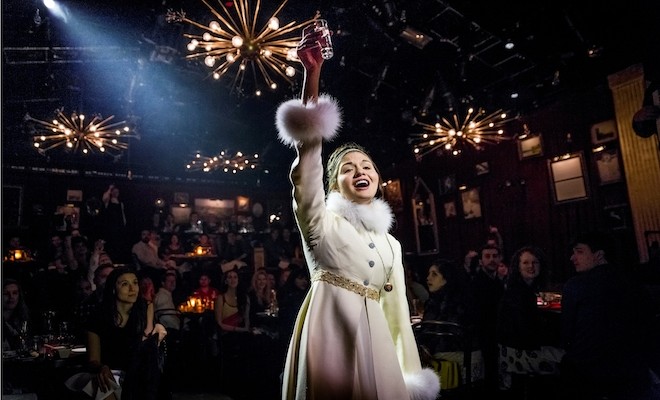 “THE TALK OF THE CITY.

THE GREAT COMET  TO CONTINUE

TO LIGHT UP TIMES SQUARE THIS JANUARY

(New York, NY – December 17, 2013) Producers Howard and Janet Kagan are proud to announce a two-week extension to the limited engagement of NATASHA, PIERRE & THE GREAT COMET OF 1812, currently playing at Kazino (45th Street between Times Square and 8thAvenue). Recently named one of the Best Musicals of 2013 by The New York Times and one of Time Magazine’s Top 10 Musicals of 2013, THE GREAT COMET will now play its final performance on Sunday, January 19, 2014. Tickets are on sale now at Telecharge.com.

Since its first production at Ars Nova in the fall of 2012, THE GREAT COMET has become a sensation, meriting expansion this summer to a 199 seat pop-up supper club built specifically for the production in the Meatpacking District. After playing to packed houses since May, producers Howard & Janet Kagan brought Dave Malloy’s acclaimed electropop opera and its opulent custom venue – Kazino – to the heart of the theater district in September of 2013.

Tickets for performances through January 19, 2014 are now on sale through Telecharge.com.  Ticket prices begin at $75, with prime and premium seating available for $175 and $237.50, respectively. The playing schedule is as follows: Tuesdays at 8, Wednesdays at 2:30 and 8, Thursdays at 8, Fridays at 8, Saturdays at 2:30 and 8, and Sundays at 3. At evening performances, audiences receive an assortment of Russian snacks at their tables, including the show’s signature pierogies. At matinee performances, audiences are treated to a Russian High Tea, complete with tea service and pastries.

Tickets are also available for a special New Year’s Eve performance and party. Celebrate the New Year in luxury at New York City’s opulent Russian supper club, Kazino, with food, drink, music, dancing and Tolstoy’s hottest young lovers.With the Full Experience package, the celebration begins at 6:30pm with a 4-course Russian feast followed by a performance of THE GREAT COMET at 8pm. Immediately following the performance, you can keep your table and waiter service during the New Year’s Eve Party, which begins at 11pm and doesn’t end until 2014. From 11pm to 2am, enjoy a DJ, dancing and open bar. The Full Experience package costs $695 and is available at Telecharge.com.

The original cast recording of NATASHA, PIERRE & THE GREAT COMET OF 1812 was released digitally by Ghostlight Records on Tuesday, October 29 and the deluxe two-CD set is now available in stores. A highlights version, featuring special selections from the acclaimed work, is also now available in digital format. The two-disc album was recorded Monday, August 26th at MSR Studios in New York City. The album was produced by Dean Sharenow, with Kurt Deutsch and Howard & Janet Kagan serving as Executive Producers.

← Previous Story “Mothers and Sons” goes to Golden
Next Story → Natasha, Pierre & The Great Comet of 1812