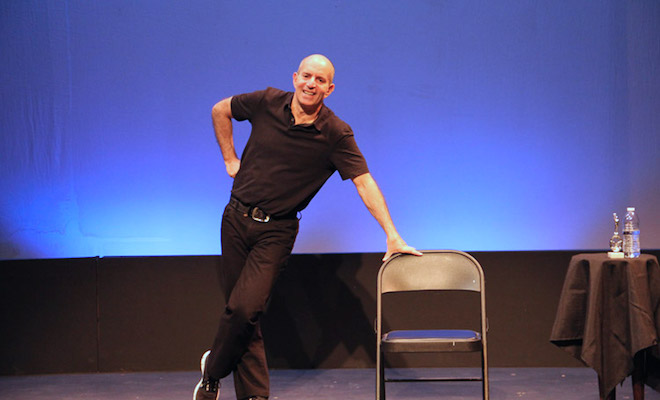 MY SON THE WAITER – A JEWISH TRAGEDY

Currently playing at the Triad Theatre on 72nd Street, My Son The Waiter – A Jewish Tragedy, is a hilarious triumph from start to finish. This one man show, written and performed by comedian Brad Zimmerman, follows Brad’s fascinating and funny journey from all-star middle school baseball player, to struggling waiter, to successful standup. Jam-packed with hilarious impressions of his mother and father, rapid-fire wit, and hilarious anecdotes, Zimmerman’s show is not only entertaining, but full of heart.

My Son The Waiter begins with Zimmerman “warming up the crowd” with a few jokes, and within minutes he has won the audience over. The laughs continue as he details his struggles to make it as an actor in New York City, while his overbearing Jewish mother can’t seem to stop herself from giving him “advice” along the way. Zimmerman recounts telling his mother about this current show’s subtitle “A Jewish Tragedy”, to which she retorts (in true Mrs. Zimmerman fashion) that the show should be subtitled “A Jewish Mother’s Tragedy”.

Brad Zimmerman is no stranger to the stage, and certainly no stranger to comedy. He has found much success in the world of standup, where he has worked with Brad Garrett (of Everybody Loves Raymond fame) and Julio Iglesias, among others. Zimmerman opened for Joan Rivers for seven years, and then went on to open for George Carlin. One of the most inspiring stories Zimmerman tells involves his time working with Carlin.

But My Son The Waiter is not just pure standup. Zimmerman’s acting training provides a solid foundation for this part standup/part theatrical piece. Zimmerman proves to be an excellent storyteller (and impressionist) as he recounts his struggles in both career and love life. Some of the more poignant moments of the show involve his relationship with his father, and what Zimmerman expresses as his “three great regrets in life”.

Zimmerman is a joy to watch. Possessing an extreme sense of ease onstage, Zimmerman makes the audience feel right at home. He immediately strikes a perfect balance of self-deprecating humor and observational comedy. And boy does he know how to land a joke. Zimmerman takes his time, always waiting for the perfect nanosecond to deliver his well-planned punch line. The audience is actually brought to the point of applause quite a few times throughout the show.

Clocking in at a breezy 90 minutes with no intermission, the show keeps you laughing from start to finish, and certainly leaves you wanting more. And as a piece of good news for theatergoers, My Son The Waiter has now been extended indefinitely. So grab your tickets, order yourself a drink (yes, you get to drink during the show), and enjoy this hysterical journey with Brad Zimmerman. You’ll be glad you did.