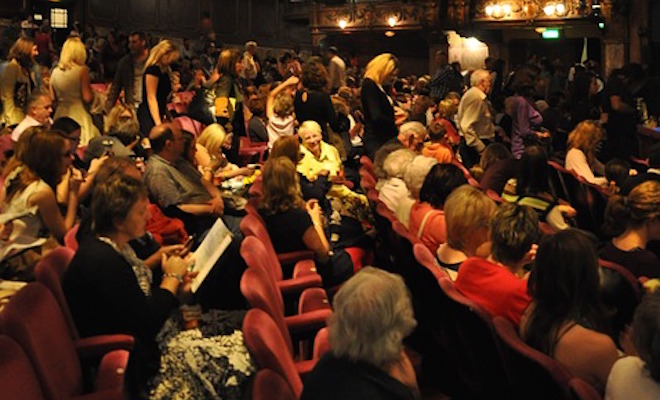 My First Broadway Review… of the Audience.

I arrived about 20 minutes to curtain, eagerly anticipating a vibrant evening of grown up make-believe. What I didn’t expect was that I was about to enjoy the performance of a lifetime… just not from the actors.

Not long after I had been seated I was first introduced to Tiny Bladder, a character who makes several appearances throughout the play (and even though none of those appearances drive the plot forward, it does add a sense of verisimilitude). Mere moments after letting her pass through to her seat, she decided that she had to use the facilities. Her conviction was reminiscent of Diana Rigg in ’94’s Medea, but Tiny Bladder’s performance had even more urgency.

It was then that I first noticed Katie and Megan having a loud arguesation about Katie’s boyfriend Chad. Firstly, I must applaud Katie’s vocal coach, because her diction and volume were crystal clear with no amplification, even from many rows away. Apparently Chad had gone to Erika’s birthday party even when Katie said she wasn’t comfortable with it. To make matters worse, he had lied about it. I know this storyline is cliché, and the writing circular, but Katie’s performance was skillfully impassioned. She leaned so well on her intention and tactic that I couldn’t help but be enraptured. I was reminded of that scene in Play That Goes Wrong where the actors get caught in a loop. Only this exchange was twice as long and lacking comedy. Megan’s head nods and futile attempts to break into the conversation did not go unnoticed, and were I on any kind of nominating committee, I would absolutely put her forward for Best Supportive Friend.

Tiny Bladder returned as Katie was reexplaining how she didn’t have problems with ALL women, just Erika. The lights dimmed and the overture began. There aren’t enough overtures anymore.

I was pleasantly surprised to discover the changes made to the “I Want” song since the original Broadway run. Most notably that it was now a trio with the two high school kids behind me. It’s comforting to know that a new audience is developing for what’s often labeled a “dying art form”. Not to mention the many dollars that would be pumped into the economy because of all the voice lessons those kids would have to take for any chance at a performing career.

Somewhere in the third scene, there was an abrupt rustling. Turns out it was just a man opening a jumbo Kit-Kat. It confused and annoyed me at first, because I couldn’t initially understand its function in context of the show. But then I remembered my super-objective: to enjoy the experience. Achieving that goal would only be made sweeter by the obstacles, and Rustling Candy Bar Man provided a very strong obstacle indeed. Especially since the Kit-Kat was entirely for himself.

One of my favorite things in a performance is when there’s a little bit of mystery, so one can imagine how exciting it was when several people orchestra center in the fifth row stood up and left in the middle of the Leading Man’s courtship of the Ingenue. With only indiscernible whispers, I couldn’t make out their reasoning, so I assumed it was merely another bathroom trip. But they never returned. I accepted it as an errant plot event… but that was disproven later.

It wasn’t long after Tiny Bladder had launched into her first bathroom reprise when a bright light cut through the darkness like a beacon of self-entitlement. Apparently Katie couldn’t turn her phone off cause then Chad would have the last word; “which would be like, the worst thing possible right now”. I thought it provided wonderful rising action, especially when another patron told her to shut it off and she refused. Several ushers noticed, but it took about five minutes before one of them could be bothered to stand there until she put it away. Talk about an engaging conflict! Though I must admit that I was disappointed that there seemed to be no consequences for her character’s behavior. I do concede that drama and real life function differently.

Several of us missed some of the action, so I was relieved when someone nearby began loudly explaining what we missed to his companion. This inspired several follow-up questions and more explanations. I felt like I was in a live-action DVD commentary. This dominated the rest of the act. As always, I’m over the moon when I hear people’s unsolicited opinions, so I listened with rapt attention.

Tiny Bladder couldn’t wait for the final blackout of the act before her second bathroom reprise. I imagine this deliberate and unusual choice was to underscore the importance of the motif.

In what had become an unexpected supporting role, Reluctant Usher made a second appearance during intermission when a couple decided to move from the balcony down to the vacant fifth row and refused to budge. Apparently, they had paid “way too much” for their tickets “in the nosebleeds”. I would have loved to be educated on what compensation would be appropriate for all the creative professionals involved in bringing the show to life, but I never got the chance. The house manager was summoned which delayed the beginning of act II. My heart was racing and I wondered how it would play out. But it was solved by deus ex machina when security escorted them out. Fascinating throwback all the way to the Greeks.

The second act wrapped up the plot quite nicely. Tiny Bladder’s third and final bathroom reprise was executed with aplomb, though it did make me wonder if she had some kind of medical problem. It cast a delightfully macabre overtone to the remainder of the show. Katie had turned the sound off on her phone, but an occasional glow of light from her purse kept the storyline fresh in everyone’s minds.

I left the theater, heart aflutter, looking forward to my next Broadway experience.