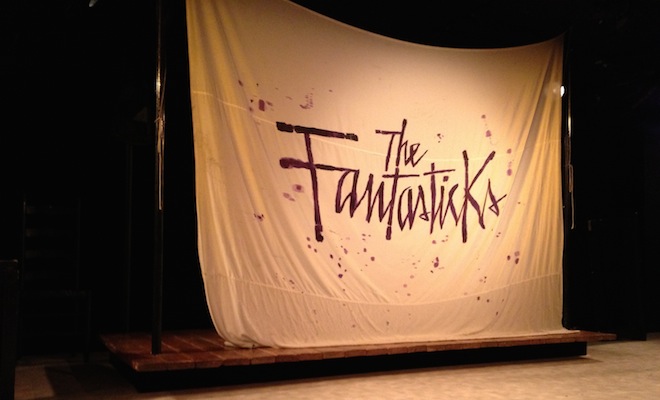 Moonlight & Magic Off-Broadway at The Fantasticks

There’s a lot of great magic beyond the big curtains and great lights of Broadway. Off-Broadway, defined by the number of seats in the theater (between 100 and 499), offers something for everyone.

If you’re looking for a funny romantic musical comedy, look no further than “The Fantasticks”, by Tom Jones and Harvey Schmidt. “The Fantasticks” is the world’s longest-running musical and just recently celebrated 20,000 performances back in September of 2013. How about that?! This production is playing in the Jerry Orbach Theater at the Snapple Theater Center. The Snapple Theater is located in the heart of the theater district and in the northern end of Times Square, at 210 W. 50th Street between Broadway & 8th Ave.

“The Fantasticks” is about a boy and a girl (Matt and Luisa), two neighboring fathers (Hucklebee and Bellomy), and a wall (The Mute). The narrator (El Gallo) invites the audience to follow him into a night of “moonlight and magic”. The fathers trick the children to fall in love by feuding about it. Traveling actors (Henry, Mortimer, and El Gallo) are hired to stage a mock abduction so Matt can save Luisa, end the feud, and finally fall in love.

The original production opened at the Sullivan Street Playhouse in 1960, but the current production at the Snapple Theater Center opened in 2006. Not to worry, “The Fantasticks” still holds its charm and authenticity as it always has done. The theater lobby is decorated with an abundance of memorabilia of production photos, playbills, posters, and costume designs, ranging from the original production to the present. Whether you’re revisiting the show or discovering it for the first time, you’ll find yourself remembering the melodious music and the likable characters. You will be welcomed by “The Fantasticks” history and entertained by a wonderful musical.

The musical is accentuated with vivid details, such as colored confetti, a tambourine, red ribbon, a trunk, and a purple moon. All are presented upon with the utmost sophistication. A little bit of magic and imagination unfolds as each character tells the story.

Look beyond the stages of Broadway and see “The Fantasticks”. Any seat in The Jerry Orbach Theater is a good seat, holding just 199 theatergoers, so get excited for the longest-running musical in the world.

Catherine is passionate about theater, currently works at Snapple Theater Center, makes sure her creative work exemplifies detail, heart, and precision, and has a BA in Graphic Design from New Jersey City University.