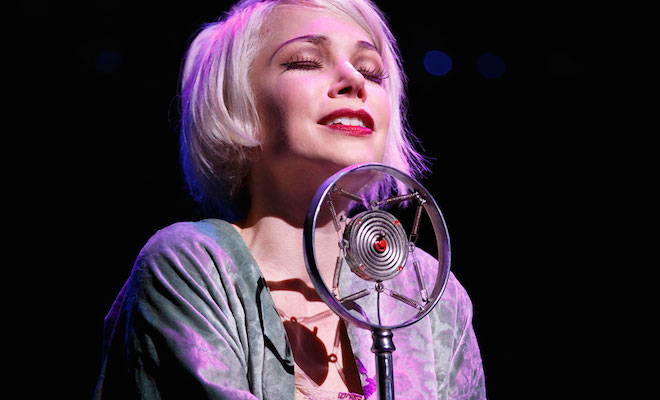 Cabaret is playing a limited run on Broadway through January 4, 2015.

For this production, Academy Award-winner Sam Mendes (director) and Academy Award nominee Rob Marshall (co-director/choreographer) recreated their Tony-nominated direction and choreography from the 1998 Tony Award-winning production.   CABARET features a book by Joe Masteroff, music by John Kanderand lyrics by Fred Ebb.  It is based on the play by John Van Druten and stories by Christopher Isherwood.

CABARET began previews on March 21, 2014 and opened officially on April 24, 2014 at the newly transformed Kit Kat Klub at Studio 54 on Broadway (254 West 54th Street).  Studio 54 has been converted into the gritty Kit Kat Klub with cabaret-type seating as well as traditional theatre seating, to recreate the decadent environment of the notorious pre-war Berlin Nightclub.

CABARET features some of the best-known songs in musical theatre, including “Willkommen,” “Maybe This Time” and “Cabaret.” John Kander and Fred Ebb are two of the most successful and prolific collaborators in the American Theatre and are currently represented on Broadway with the award-winning revival ofChicago.

CABARET is made possible with Bank of America as a Proud Sponsor, American Airlines as the Official Airline and MAC as the Official Makeup Partner.  Major support for Cabaret is provided by The Blanche and Irving Laurie Foundation.

Roundabout subscribers save up to 50% off tickets to Cabaret and Roundabout donors are guaranteed the best seats in the house. For more information on subscriptions or to become a donor, visitroundabouttheatre.org/packages or call 212-719-1300.

Roundabout Theatre Company is committed to producing the highest quality theatre with the finest artists, sharing stories that endure, and providing accessibility to all audiences.  A not-for-profit company, Roundabout fulfills its mission each season through the production of classic plays and musicals; development and production of new works by established and emerging writers; educational initiatives that enrich the lives of children and adults; and a subscription model and audience outreach programs that cultivate and engage all audiences.

Roundabout Theatre Company presents a variety of plays, musicals, and new works on its five stages.  Off-Broadway, the Harold and Miriam Steinberg Center for Theatre, which houses the Laura Pels Theatre and Black Box Theatre, with its simple sophisticated design, is perfectly suited to showcasing new plays. The grandeur of its Broadway home on 42nd Street, American Airlines Theatre, sets the ideal stage for the classics.  Roundabout’s Studio 54 provides an exciting and intimate Broadway venue for its musical and special event productions.  The Stephen Sondheim Theatre offers a state of the art LEED certified Broadway theatre in which to stage major large-scale musical revivals. Together these distinctive homes serve to enhance Roundabout’s work on each of its stages.