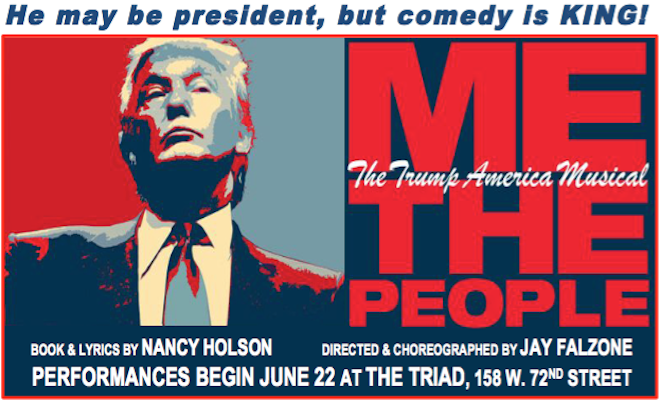 “Me The People: The Trump America Musical” will play The Triad

Me The People: The Trump America Musical, a new musical revue with a book and lyrics by Nancy Holson (Bush Wars, The News in Revue on PBS – 5 Emmy Awards, Ludwig Live!) and directed and choreographed by Jay Falzone (Bush Wars, Cooking with the Calamari Sisters), will play at The Triad (158 W. 72nd Street between Amsterdam and Columbus Avenues), it was announced today by producer Jim Russek. The open-ended engagement begins June 22. Opening night is June 29. There are two special sneak-peek preview performances Wednesday May 24 and Friday May 26 at 9:30PM.

Something funny is happening on the way to the coronation. Me The People, conceived by Jim Russek, Nancy Holson, and Jay Falzone. is an uproarious take on the craven, self-dealing Trump agenda intent on tearing apart our government and building a stupid wall. The show delivers a topical, up-to-the minute mockumentary of red-white-and-orange America. You don’t need to be a nasty woman, a Mexican or a Bernie-bro to find cathartic laughs in this 90-minute tonic for your 2016 election hangover.

“There is a long-standing tradition of countering our darkest moments with political satire,” says producer Jim Russek who last brought 2006’s Bush Wars to the stage with the same writer/director team of Nancy Holson and Jay Falzone. “From Will Rogers and Lenny Bruce to Tom Lehrer and today’s late-night comics, laughter has always been a first amendment weapon of choice.”

Me The People offers a hilarious diagnosis from Sigmund Freud and a tour de force earful from Hillary Clinton; no one is spared from the Crony Cabinet and Supremely Radical Court, to White House grifters Ivanka and Jared and of course, the Trumpcare debacle. “As we learned in 2006, outrage is best remedied with a drink in hand and a roomful of shared laughter,” says Russek. “Progressives will find it as delicious as a YUGE piece of chocolate cake. Trumpworld, not so much.”

LISTINGS INFORMATION: Me The People: The Trump America Musical begins performance June 22 at The Triad (158 W. 72nd Street between Amsterdam and Columbus Avenues). Doors open at 9PM. Tickets are $39 – $49 (plus a 2 drink minimum). Tickets and complete performance schedule (which varies weekly) are available at www.MeThePeopleMusical.com or by calling 212-279-4200.

NANCY HOLSON (Book & Lyrics) is an Emmy-award winning writer, director and producer whose 25-year career spans the worlds of commercial live theater, corporate theater, and television. Nancy wrote, co-produced and co-directed the long-running hit show The News In Revue (1992 – 2011), on PBS (5 Emmy Awards), NPR, Off Broadway, the Berkshires and numerous venues from coast to coast. Writer/Director/and/or Producer – Off Broadway: Bush Wars and Ludwig Live! NYC and Regional: Parenting 101: The Musical, Dear Mom, Can I Really Date A Guy Who Wears A Yarmulke? London: Ludwig Live! Her new piece, Nutcracker! The Musical, had its initial productions in New York and London. Nancy believes that we all need to resist the horrors foisted upon us by the Trump administration in whatever means we can, and Me The People is her way of using her voice.

JAY FALZONE (Director) directed, choreographed, and performed political satire for the better part of the past 17 years in both Nancy’s News In Revue and Bush Wars. He’s the co-creator and writer for Cooking With the Calamari Sisters as well as the other 9 shows in The Calamari Sisters franchise (www.TheCalamariSisters.com). Other credits include Divorce Party The Musical (Book/Lyrics/Director/ Choreograoher), Dear Mom (Co-writer/Director), Parenting 101 (Co-writer/ Director), among others. Current projects: Kung-Fusical The Kung Fu Musical (Book) and Son Of Captain Blood (Co-writer).

JAMES HIGGINS (Music Director/Arrangements) Originally from Montreal, James is a music director, orchestrator and occasional actor in NYC. He has previously collaborated with the wonderful Nancy Holson on Ludwig Live! at SubCulture (as Beethoven). He has performed in over 80 countries on all 7 continents (including in the middle of the Southern Ocean off the coast of Antarctica.) Pre B’way: Jeanne La Pucelle (d. Martin Charnin); Off B’way: Old Jews Telling Jokes, Living With Henry; New York City: Goddess Wheel (by Galt McDermott), Gefilte Fish Chronicles (also performed at the White House!), Astoria Stories (APAC), Urinetown, Drowsy Chaperone, amongst others; over a hundred regional theatre credits in the US and Canada including: Slow Dance With A Hot Pickup (Boulder Dinner Theatre), Once Upon A Time In New Jersey (Surflight), Music Of The Night (North Shore Music Theatre), Ragtime, South Pacific, Bat Boy, and Candide. Visit iamjameshiggins.com for more information.

JIM RUSSEK (Producer) began his career working for four seasons as a weekend production assistant on The Ed Sullivan Show and later as a full time political consultant. He was co-chair of Students for Kennedy at NYU in 1968, Chief Advance for Rep. Richard Ottinger’s 1970 US Senate campaign, national political advance for Senator Edmund Muskie in 1972, chief political advance Rep. Roman Pucinski for US Senate (Illinois) and consulted on numerous local New York campaigns. Jim joined Case & McGrath Advertising after hiring the agency to create political advertising. Along with Gene Case, Jim managed political ad campaigns for, among others, mayoral candidate Bella Abzug and Gov. Francis Sargent (MA). Together, they won the account of The New York Shakespeare Festival and helped launch A Chorus Line on Broadway. After a short but significant stint with advertising Hall of Famer Julian Koenig, Jim started his own ad agency with illustrator Paul Davis with whom he helped create six years of breakthrough advertising campaigns for the New York Shakespeare Festival. Davis & Russek became Russek Advertising and Jim began 29 years of campaigns for Lincoln Center Theater including Anything Goes, Six Degrees of Separation, The Sisters Rosensweig, Carousel, The Hieress, Contact, The Light In The Piazza, South Pacific, War Horse, Golden Boy, The Nance and Act One. As a producer, Jim conceived and co-produced the critically acclaimed musical revue Bush Wars. He co-produced John Guare’s Bosoms and Neglect in Boston, Rob Bartlett’s Have A Nice Life and the News In Revue in Stamford, CT. With Bill “Spaceman” Lee, Jim founded and ran The New England Grey Sox, a barnstorming team of former Boston Red Sox players touring New England in the 1990s. Jim is the founder of the music website BwayTunes.com and a creative contributor to the comedy website RuthlessSpectator.com and a board member of Most Valuable Kids (MVK) an organization that provides professional sports and culture tickets to underserved and at-risk kids through 80 social service organizations in New York.