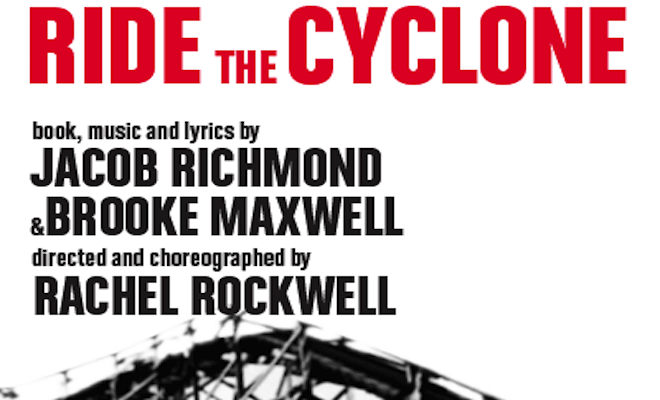 New York, NY – MCC THEATER (Robert LuPone, Bernard Telsey, William Cantler, Artistic Directors; Blake West, Executive Director) today announced casting and full creative team for its thrilling New York City premiere of the new musical Ride the Cyclone, which marks just the third musical in MCC’s now-iconic 30-year history of producing new works for the American theater. With book, music and lyrics by Jacob Richmond and Brooke Maxwell, Ride the Cyclone had its celebrated U.S. premiere in 2015 at Chicago Shakespeare Theater under the direction and choreography of Rachel Rockwell, who returns for the MCC production. The cast will feature original Chicago cast members Lillian Castillo, Karl Hamilton, Emily Rohm and Kholby Wardell joined by NBC’s “Peter Pan Live” star Taylor Louderman, Deaf West’s Spring Awakening standout Alex Wyse, stage and screen actor Gus Halper, The Last Ship’s Johnny Newcomb, and Peter and the Starcatcher’s Emily Walton.
“Ride the Cyclone is a very MCC-style show – it’s probing and unpredictable – and will leave our audiences with plenty to talk about after,” said Co-Artistic Director Bernie Telsey, speaking on behalf of the company’s artistic leadership. “It makes so much sense that this should be our 3rd musical of many future works to play on the MCC stage – building on our reputation for thought-provoking plays with musicals as well. It points toward what we’ll be doing more of as we move forward to our new theater in 2018.”
Ride the Cyclone, a centerpiece of MCC’s 30th Anniversary Season, will be performed at the Lucille Lortel Theatre (121 Christopher Street) with previews beginning November 9 ahead of an Opening Night on December 1. It is currently scheduled through December 18. Tickets are now on sale. For more info, visit www.mcctheater.org.
The Saint Cassian High School Chamber Choir will board the Cyclone roller coaster at 8:17pm. At 8:19 the front axle will break, sending them to their tragic demise. A mechanical fortune teller invites each to tell the story of a life interrupted – with the promise of a prize like no other. Ride the Cyclone is a wildly original new musical – part comedy, part tragedy, and wholly unexpected.
During its smash-hit world premiere in 2015, the Chicago Tribune raved: “Quirky, bizarre, emotionally hefty and rather tantalizing… Ride the Cyclone, poised to take the world by storm, is edgy and just dangerous enough to feel fresh and yet completely steeped in the traditions of musical theater.” The New York Times called it: “An unceasingly delightful new musical…a witty, small-scaled show of immense sweetness and originality. If purgatory were really this much fun, I’d be happy to spend a lifetime there.”
Ride the Cyclone features scenic design by Scott Davis, costume design by Theresa Ham, lighting by Greg Hofmann, sound by Garth Helm, and projections by Mike Tutaj. Musical supervision by Doug Peck and musical direction by Remy Kurs.
In celebration of its 30th Anniversary Season, MCC Theater will offer a limited number of $30 tickets to preview performances of Ride the Cyclone.
The 2016-17 MCC Theater season will also include the NYC premiere of Anna Jordan’s Bruntwood Prize-winning play YEN (January 12 – February 19, 2016) directed by OBIE winner Trip Cullman, the latest play makes its American premiere at MCC after making its world premiere at the Royal Court following The Pride and The Nether; and the NYC playwriting and stage acting debut of Emmy-nominated “Friends” star Matthew Perry who wrote and will star in his play The End of Longing (May 18 – June 24, 2017), directed by Lindsay Posner, following its hit London run. In addition to its mainstage premieres, MCC will continue its PlayLabs series and education initiatives throughout the season. More information on this year’s PlayLabs, which showcase in-progress works by emerging playwrights and invite audiences into the development process, is available at www.mcctheater.org.
MCC Theater broke ground on its first permanent home— a two-theater complex on West 52nd Street and 10th Avenue—on March 22, 2016. Set to open in 2018, the space will unite MCC’s diverse roster of programs under one roof for the first time in the company’s three-decade history. The new facility will also allow MCC to expand its programming and establish it as a cultural anchor within the Clinton neighborhood. The $35 million project is funded by a public-private partnership between the Theater and the City of New York, with $30.5 million raised to-date.

About MCC Theater
MCC is one of New York’s leading nonprofit Off-Broadway companies, driven by a mission to provoke conversations that have never happened and otherwise never would. Founded in 1986 as a collective of artists leading peer-based classes to support their own development as actors, writers and directors, the tenets of collaboration, education, and community are at the core of MCC Theater’s programming. One of the only theaters in the country led continuously by its founders, Artistic Directors Robert LuPone, Bernard Telsey, and William Cantler, MCC fulfills its mission through the production of world, American, and New York premiere plays and musicals that challenge artists and audiences to confront contemporary personal and social issues, and robust playwright development and education initiatives that foster the next generation of theater artists and students.

Plays and musicals developed by the company have gone on to stagings around the globe. Notable productions over the course of the company’s 30-year history include Robert Askins’ Hand to God, nominated for five Tony Awards and transferred to London’s West End; Sharr White’s The Other Place, starring Laurie Metcalf; The Submission by Jeff Talbot, winner of the inaugural Laurents/Hatcher Foundation Award for new American plays; Bryony Lavery’s Frozen, a 2004 Tony nominee for Best play and winner for Brian F. O’Byrne’s performance; Wit by Margaret Edson, winner of the Pulitzer Prize for Drama in 1999; the classic cult musical Carrie, which has gone on to international productions since the Theater’s extensive redevelopment work and staging in 2012, the first in more than two decades; and ten plays by Playwright-in-Residence Neil LaBute, including Fat Pig; reasons to be pretty, a 2009 Tony nominee for Best Play; and Reasons to Be Happy. Blake West joined the company in 2006 as Executive Director. MCC will open its first permanent home in 2018 in Manhattan’s Clinton neighborhood, unifying the company’s activities under one roof for the first time and expanding its producing, artist development, and education programming. The Theater is currently in the midst of a $35 million campaign to support its expansion and growing artistic operations, with $30.5 million raised to-date.

Lillian Castillo (Constance) is based out of Chicago and is excited to make her New York debut with MCC. She is even more thrilled to be here with this crazy beautiful piece. Credits include: Ride the Cyclone, Shakespeare’s Greatest Hits and Seussical (Chicago Shakespeare Theater); Sister Act and Man of La Mancha (The Marriott Theater); Wonderland: Alice’s Rock and Roll Adventure (Chicago Children’s Theater); Hairspray, Sleeping Beauty and West Side Story (Drury Lane Theater); Rudolph the Red-Nosed Reindeer (Emerald City); In The Heights (Paramount Theater). Other Regional Credits: Why Do Fools Fall in Love (Milwaukee Rep); Hairspray and Glorious! (Arkansas Rep); Hairspray (Phoenix Theater); Macbeth, Fiddler on the Roof, Great Expectations a New Musical, HMS Pinafore, The Merchant of Venice, Comedy of Errors, Lend Me A Tenor: The Musical, The Matchmaker and School for Wives (The Utah Shakespeare Festival).

Gus Halper (Misha) stars alongside Nick Jonas and Ben Schnetzer in David Gordon Green’s upcoming film GOAT that premiered at Sundance this year. He can currently be seen in a recurring role on the Starz hit show POWER, produced by 50 Cent. Additional TV credits include the lead role in the ABC pilot KINGMAKERS, a recurring role in TNT’s PUBLIC MORALS and an upcoming guest spot on PBS’ MERCY STREET. Gus is a graduate of the University of North Carolina School of the Arts.

Karl Hamilton (Karnak) reprises his role from the remarkably successful run at Chicago Shakespeare Theatre. His Regional credits include: All the Way and Living on Love (Asolo Rep – Sarasota, FL) and Mamma Mia! (Tropicana – Las Vegas, NV). While his Chicago credits include: The Most Happy Fella (Ravinia Festival), The Jungle Book and By the Music of the Spheres (Goodman), The Three Musketeers, The Merry Wives of Windsor and As You Like It (Chicago Shakespeare Theater) A Christmas Carol, Seven Brides for Seven Brothers, and Mame (Drury Lane Oakbrook), For the Boys, The Full Monty and Shenandoah (Marriott), The Christmas Schooner and The Addams Family (Mercury) which earned him a Jeff Nomination for his portrayal of Gomez.

Johnny Newcomb (Male Understudy) made his Broadway debut in The Last Ship (Music by Sting, Dir. by Joe Mantello) with which he also performed on Macy’s Thanksgiving Day Parade and The 37th Annual Kennedy Center Honors. He appeared in the Broadway National Tour of Green Day’s American Idiot, The Public Theater’s production of Into The Woods, and recently starred as Roger in RENT at the Edinburgh Festival Fringe under Creative Guidance of Original Broadway Cast member Anthony Rapp. Regional favorites include Spring Awakening (Melchior) and Next to Normal (Henry) at ZACH Theatre in Austin, TX, and RENT (Roger) at Ivoryton Playhouse in CT. All my love and thanks to Mom & Dad, my beautiful sisters, Telsey + Company, MCC Theater and Gotham Talent Agency. www.johnnynewcomb.com Instagram: johnnynewcomb

Emily Rohm (Jane Doe) is based in Chicago, where her recent credits include Jane Doe in the US premiere of Ride the Cyclone (Chicago Shakespeare Theater), Arminy in Carousel (Lyric Opera), and the title role in Mary Poppins (Paramount Theatre). Other favorite roles include Marian Paroo in The Music Man (Paramount Theatre), Jane Ashton in Brigadoon (Goodman Theatre), Belle in Disney’s Beauty and the Beast (Chicago Shakespeare Theater), Cosette in Les Miserables, and Johanna in Sweeney Todd (Drury Lane Oakbrook). Emily appeared in the off-Broadway production of Creature, the Rock Opera and as Baby Blue in the world premiere and cast album of the opera Dreaming Blue. She earned her B.A. in Music Theatre from Lawrence University in Wisconsin. Emily is also the owner of Röhm, a clothing design label that specializes in handmade bridal garments.

Emily Walton (Female Understudy) is very happy to be making her MCC debut with Ride the Cyclone. Broadway: Peter and the Starcatcher, August: Osage County. Off-Broadway: Drama Desk-nominated revival of Women Without Men (Mint Theater Company), Eager to Lose: A Burlesque Farce in Rhyming Verse (Ars Nova), The Shaggs and Saved (both at Playwrights Horizons), Cactus Flower (West Side Theatre), and The Deepest Play Ever (New Ohio Theatre). Favorite regional credits include A Little More Alive (Barrington Stage Co.), The Fairytale Lives of Russian Girls (Yale Rep), Third (Two River Theater), and The Wizard of Oz (Sacramento Music Circus). Film/TV: 5 Doctors, Blue Angel (starring Stanley Tucci), and TBS’ Search Party. Emily is also a singer-songwriter and will be recording her first full-length album of original music this fall! Check her out at ladyemilywalton.com. Thanks to everyone involved in this show, WTG, family, friends, and Drew!

Kholby Wardell (Noel) makes his New York debut at MCC Theater. Kholby has played the role of Noel in every production of Ride the Cyclone including last year in Chicago. Notable credits include Algernon in The Importance of Being Earnest, Seymour in Little Shop of Horrors, Freddie in My Fair Lady, Hal in Loot, (Blue Bridge Repertory Theatre); Lance in 500 Words (Green Thumb Theatre for Young Adults); Ensemble in Brilliant! The Blinding Enlightenment of Nicola Tesla (Electric Company Theatre and The Belfry Theatre); and the Musical Works in Concert festival. Kholby hails from small-town British Columbia, Canada, and he now splits his time between Victoria and Toronto. He would like to send love and light to Rielle & Jamie and a special thanks to Bob Milne.