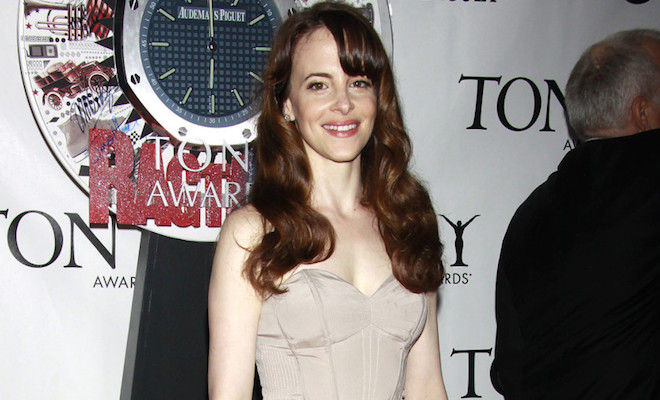 Maria Dizzia is Shellie In ‘The Layover’

* * * * * * * *
August 31, 2016 – Second Stage Theatre (Carole Rothman, Artistic Director, Casey Reitz, Executive Director) has announced Maria Dizzia will assume the role of Shellie in the world premiere production of THE LAYOVER, written by Leslye Headland and directed by Trip Cullman, on Tuesday, September 6. She returns to Second Stage Theatre after her acclaimed performance in the title role of Eurydice, during the company’s 28th season.

Annie Parisse, who has to leave the production to begin filming the new Netflix series “Friends From College,” will play her final performance on Sunday, September 4.

Maria Dizzia’s New York credits include Belleville (2013 Drama Desk Nomination), Uncle Vanya, Cradle and All and The Hallway Trilogy, among others. She earned a Tony Award nomination in 2010 for her work in In the Next Room (or the Vibrator Play). Maria also portrayed Polly on two seasons of Netflix’s “Orange is the New Black.” Her other film and television credits include While We’re Young, Martha Marcy May Marlene, Margin Call, Rachel Getting Married, “Royal Pains,” “The Newsroom,” “The Good Wife,” “Master of None,” “Louie,” “Fringe,” and “Law & Order.” She will be seen in New Line’s upcoming film Going in Style, the independent films The Last Poker Game and Three Generations, and on NBC’s “Blacklist” and CBS’s “Elementary.”

THE LAYOVER is the final production of Second Stage Theatre’s 2015-16 mainstage season.

THE LAYOVER began previews on Tuesday, August 9 and officially opened on Thursday, August 25 at Second Stage’s Tony Kiser Theatre (305 West 43rd Street). Tickets are currently on sale. A limited number of 30 under 30 seats are available for $30 for people ages 30 and under. Season subscriptions are currently available through 2ST.com or by calling the box office at 212-246-4422.

Ever wonder who that stranger is sitting next to you? What is their story? What are they hiding? Shellie and Dex dare to answer these questions after their flight is delayed on a snowy Thanksgiving night. What they discover about themselves, and each other, sends both of their lives into upheaval. A psychological drama from the darkly funny writer of Bachelorette, The Layover asks the question: Can you ever really get to know somebody when you’re hiding so much yourself?

In 2015 Second Stage Theatre purchased the historic Helen Hayes Theatre, located at 240 W. 44th Street. With this new home, Second Stage will be the only theatre company on Broadway dedicated exclusively to the development and presentation of contemporary American theatrical productions. The company will continue to lease and operate their original theatres on the city’s Upper West Side and in Midtown Manhattan. Second Stage Theatre has enlisted David Rockwell and The Rockwell Group to make renovations and updates to the 103 year old landmark building. They will begin renovations on the theatre in 2016 and plans for its first Broadway production to be staged in the Hayes during the 2017-18 season.

Season subscriptions are currently available through 2ST.com or by calling the box office at 212-246-4422.