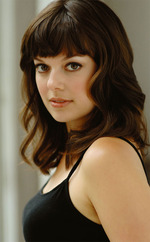 After Tamar of the River, Margo will be making her Broadway debut this February in Rocky as “Adrian” opposite Broadway favorite Andy Karl as “Rocky” at the Wintergarden Theatre.

For more on Margo be sure to visithttp://margoseibert.wordpress.com!

1. Who or what inspired you to become a performer? It’s difficult to pinpoint one particular moment or person as I think my decision to perform was a cumulative effort, with much encouragement along the way. It starts with my parents cultivating my very active imagination, and instilling a love of music at an early age. Also I credit growing up in Howard County, Maryland, where the arts seemed to be viewed as intensely important, especially in the public school system. I was pretty sold in second grade after seeing a matinee of the Velveteen Rabbit at Toby’s Dinner Theatre of Columbia. I ended up working there a little less than ten years after I saw that production.

2. Who haven’t you worked with that you would like to? Working on an original piece of theatre is always a thrill for me, especially when I get to work hands on with the writers. I have had the opportunity to work with many emerging writers/composers and would like to continue to do the same. Looking ahead to the winter, the creatives assembled for ROCKY are a dream team for me. I am a huge fan of Ahrens and Flaherty and fell in love with Alex Timbers’s work with Peter and the Starcatcher.

3. What attracted you to Tamar of the River? About 3 years ago, the ever generous Ted and Mary Jo Shen gave us the opportunity to work on Tamar of the River for a full two week workshop at Signature Theatre in VA. What astounded me and completely intimidated me from the get go was Marisa Michelson’s music. We began working on the score together a month in advance at her apartment in Brooklyn. I was completely in over my head, and loved it. Now that we’ve been working so closely on this material for years, I finally feel like the music can live in me rather than being performed by me.

Margo Seibert and the cast of “Tamar of the River”4. What do you identify most with about “Tamar”? Without revealing too much about the show, I identify very much with “Tamar’s” reconciliation towards the end of her journey. After all of her successes and mistakes, she asks “Did I make it better?” I think it’s something that we all struggle with while we’re here on this earth. Did our choices make any positive impact in the world? Will we be remembered?

6. What have you enjoyed most about working with Prospect Theater Company? Prospect gave Tamar it’s first chance to be fully realized on stage and for that I am ever grateful! Doing new experimental work is always a risk and Prospect dives right in when they see a story that needs to be told.

7. After Tamar of the River, you are going to be starring in Broadway’s Rocky as “Adrian.” What excites you about making your Broadway debut? What does it mean to you to originate this role on Broadway, made so iconically memorable by Talie Shire in the film? What are you looking forward to most about working with Andy Karl? I’m thrilled to be making my Broadway debut with Rocky! What excites me about this opportunity is not only am I able to originate this role on Broadway, which is a complete dream, but that the creative team took a chance on an ‘unknown.’ I hadn’t had any previous connection with the piece, and didn’t know anyone involved with the show. The fact that took this chance speaks to the heart of the creative team as well as to the heart of the show.

Andy Karl and I just found out that we actually grew up rather close to one another in Maryland and worked at the same dinner theatre! Not only do we share a lot geographically, but we both worked our way up the rungs with simple means. He’s kind, he’s honest, and so hard working. I think he’s going to make an exceptional Rocky and can’t wait to share the stage with him!

8. What have you learned about yourself from being a performer? I’ve learned there is always more to learn. More theatre to love, more performances to by awed by, more ways to be humbled. I’ve learned vulnerability is not the enemy, but a damn good friend. I’ve learned that we are capable of more than we ever thought.

9. What’s the best advice you’ve ever received? You are your best investment.

10. If you could have any super power, which one would you choose? There are so many amazing choices out there, flying, time travel, etc. But I’m a practical girl, and on a practical superpower level, I’d say it’s a tie between making the G train come when I will it to, and unlimited access to everything at Whole Foods without it ever being reflected in my checking account.

Since moving to NYC in 2010, Margo has made herself an invaluable addition to the emerging musical theatre scene; developing work at Playwrights Horizons, NAMT, O’Neill Center, New Dramatists, Ars Nova, and NYU. She has originated work for many award winning writers including: Adam Gwon, Josh Schmidt, Marisa Michelson, Gordon Leary and Julia Meinwald, Tom Mizer and Curtis Moore, and Jahn Sood and Max Mamon.

Her regional career has taken her all over the country from working with Mary Zimmerman at the Goodman Theatre, the Shakespeare Theatre in DC, Two River Theatre, to Weston Theatre and more. Internationally, Margo was selected as one of 29 NYC actors for the Old Vic’s UK/US T.S. Elliot Exchange in London for a week of workshops with Kevin Spacey and premiere a new play on the Old Vic Stage.

Margo can be seen on HBO’s Boardwalk Empire, on national commercials, and heard on the Naked Angels: Naked Radio podcast.