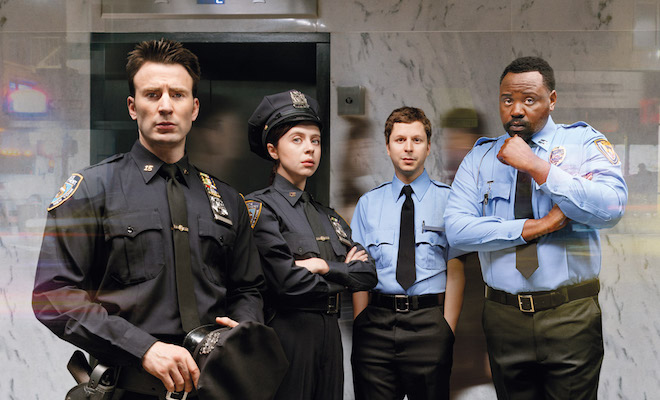 What happens when emotions come in conflict with principles, and how do choices under pressure define who we really are? The lobby of a Manhattan apartment building is much more than a waiting area for four New Yorkers involved in a murder investigation. It’s a testing ground for what happens when personal and professional personas find themselves at odds. A young security guard with big ambitions clashes with his stern boss, an intense rookie cop and her unpredictable partner in LOBBY HERO, the acclaimed play from the 2017 Oscar-winning writer of Manchester by the Sea.

In 1999, Second Stage Theater opened The Tony Kiser Theater, its state-of-the-art, 296-seat theater, designed by renowned Dutch architect Rem Koolhaas. In 2002, Second Stage launched “Second Stage Theater Uptown” series to showcase the work of up and coming artists at the McGinn/Cazale Theater. The Theater supports artists through several programs that include residencies, fellowships and commissions, and engages students and community members through education and outreach programs.

Second Stage Theater purchased the historic Helen Hayes Theater, located at 240 W. 44th Street, in 2015. The company will continue to lease and operate their original theaters on the city’s Upper West Side and in Midtown Manhattan. Second Stage Theater has enlisted David Rockwell and The Rockwell Group to make renovations and updates to the 104 year old landmark building.

Second Stage Theater is investing in its future on Broadway by co-commissioning established playwrights through its STAGE-2-STAGE program, launching with Los Angeles’s Center Theatre Group. This ongoing program will provide a pathway to Broadway, with each play receiving an initial production in Los Angeles at one of CTG’s three theaters before moving to New York. The commissioned playwrights are Jon Robin Baitz, Will Eno, Lisa Kron, Young Jean Lee, Lynn Nottage, and Paula Vogel.