i secured my tickets for the album release event of ‘#love…live’ a few weeks before the event. this was an event that i was most definitely not about to miss. for those of you who “thought about going” or “forgot”…let me be the first to tell you, ya missed a sexy piece of formidable history happening under a warm roof in the east village staple rockwood music hall. yes, the temperature was hot, but what was going on onstage…warmed me to my core. goosebumps and smiles, memories and heart strings, co-signs and amens…they were as present as the thick air of enthusiasm that bubbled around the room.

i walked into the music hall and immediately ran into a few familiar faces. (one thing i absolutely love about the arts community in nyc is that we support hardcore.) tinges of excitement fell freely from our lips in anticipation for what we’d all come to hear and witness: lyons and pakchar’s arrangement of an electrically charged evening of their original work. even though i was on the list and made it in before the line that was — quite literally — down the block, i still ended up standing…in the

back. no worries. i ran into lyons — who (like  a kid at christmas) squealed “i didn’t know the line was going down the block?!” — and said hello to pakchar and settled into my spot. i grabbed my jack and coke and was ready for my anticipation to take over. and just like that with the first note, it did….

‘not meant to be in love’ (sung by rashidra scott of ‘sister act’) released a wave of chills down my spine. the only thing i can compare it to is those knives that you see on the infomercials that cut through vegetables in one effortless swipe. you know what I’m talking about. and it’s clean. neat. here’s :25 to show you what i mean…

see what i mean? oh, but the mic was just getting heated up. jarred spector (‘beautiful: the carole king musical’) carried us with the most innocent pair of melodic wings through what he felt when he sang ‘inside.’ the evening brought smiles when a coy, soulfully grind-ful and appropriately toothy marty thomas perfectly described a ‘crush’…but you’re only getting :54 seconds of it. 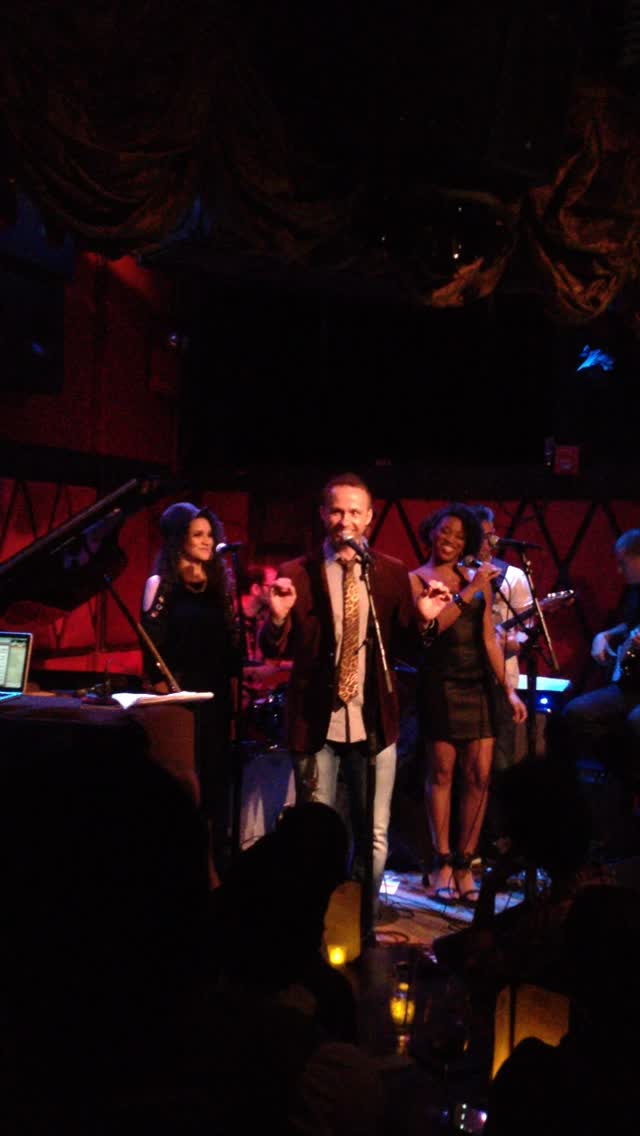 we’ve all felt that way at some point. and three songs in, i was unraveling the ball of mystery as to what was so magical about the music (and why my goosebmps hadn’t retracted just yet): it’s because this music is relatable. it’s every man’s story. no matter how jaded you are. and the next song was anything but…although the message is clear. ‘get on out.’ a tall woman (amber iman of ‘soul doctor’) with an even taller voice (that could fit two titanic ships in between its folds) commanded the stage. she chewed it up and spit it out and you STILL wanted it. two unique things about this song. 1) it was freshly manufactured by the brilliant duo and 2) i have the whole clip. click it if you’re ready to find what’s been missing in your life.
amber iman (soul doctor) ‘get on out’ 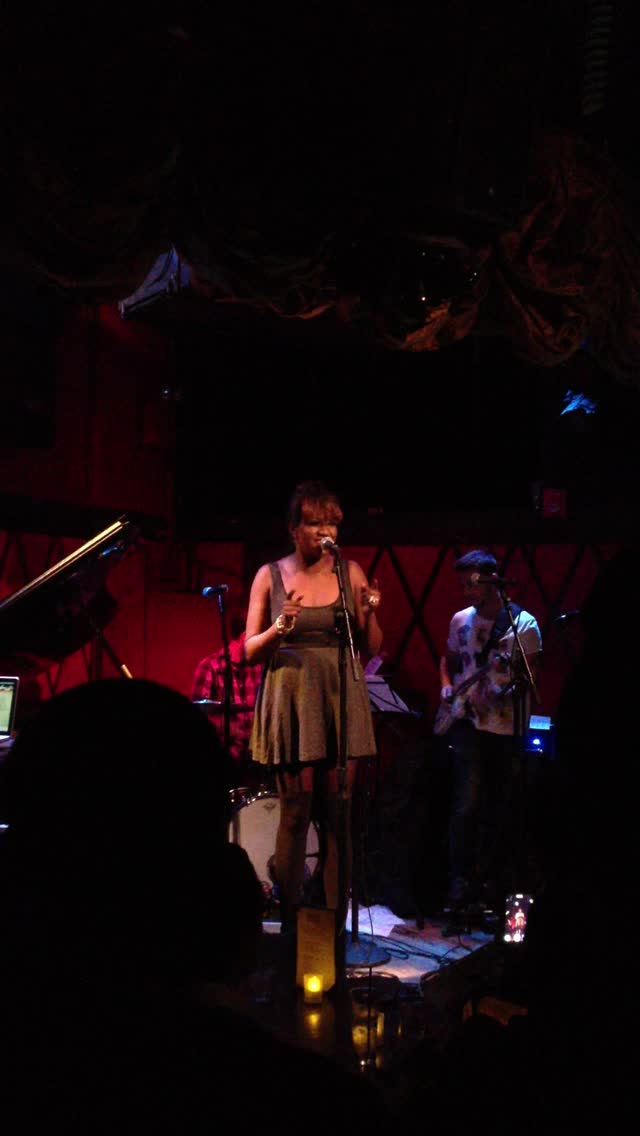 i’ll wait while you pick up your jaw. i thought that nothing could make the evening better. but i realized that the evening wasn’t just about the music. it wasn’t about topping the next number or making it better. it wasn’t about show. it was about transaction.t here wasn’t a specific order — i felt — that any of the songs needed to be in, in order to make a bigger impact. no. the simplicity of the messages worked in such a polyphonous way and the chewiness of the arrangements always left you satisfied, but wanting more…like a lover or an old friend. next stop, 1/2 of lyons and pakchar (lyons) — because of an under-the-weather performer — took the stage to grace us with his voice, his spirit, his soul “in his key” as he so endearingly put it. you know how they say “practice what you preach?” here’s 1:00 of proof that he, in fact, does. someone might as well have started grazing my ears with a cashmere scarf because hearing lyons sing ‘free’ felt like the same thing. 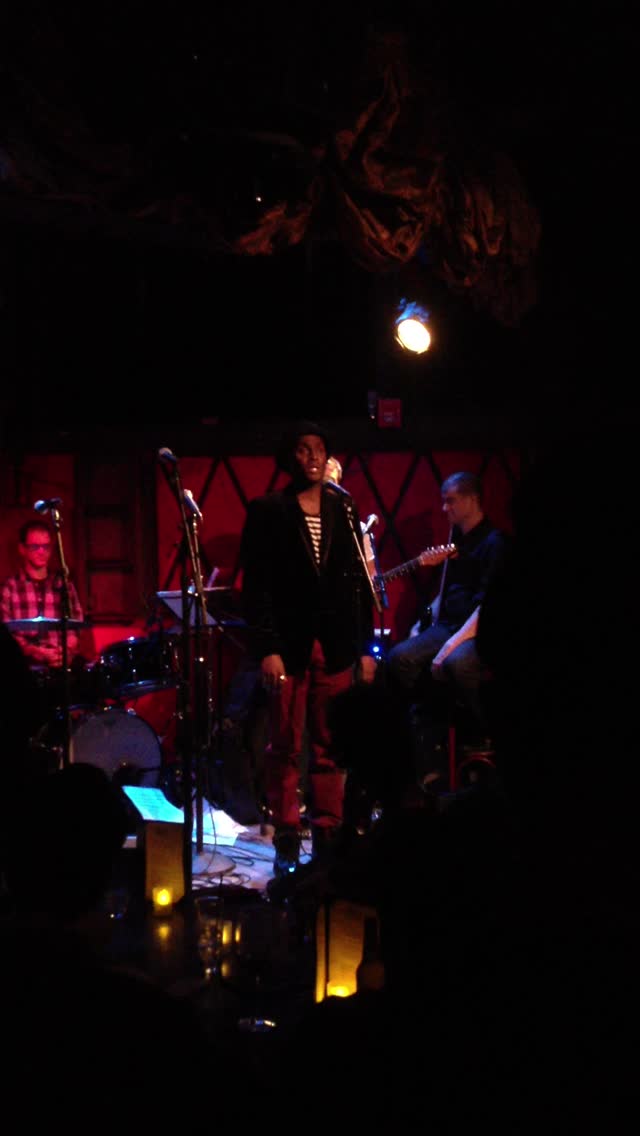 i’m sure you felt the stillness that was present while he sang. i’m sure it was the same stillness that he feltwhen he sat at his parents’ piano in new haven, ct shortly after the breakup that was the catalyst for such a truthful song. did i mention lyon’s parents were there? yeah. he cried. (i would have too.) after lyons left his heart on the stage, the heavens parted and a being of light descended. not really, but the angelic sweetness with which alexa green freely distributed her vocal sensibilities would make you think that she was. donned with wavy blonde hair she took us on a “sweet” journey with ‘sweet pea.’ here’s :47.
alexa green singing ‘sweet pea’ 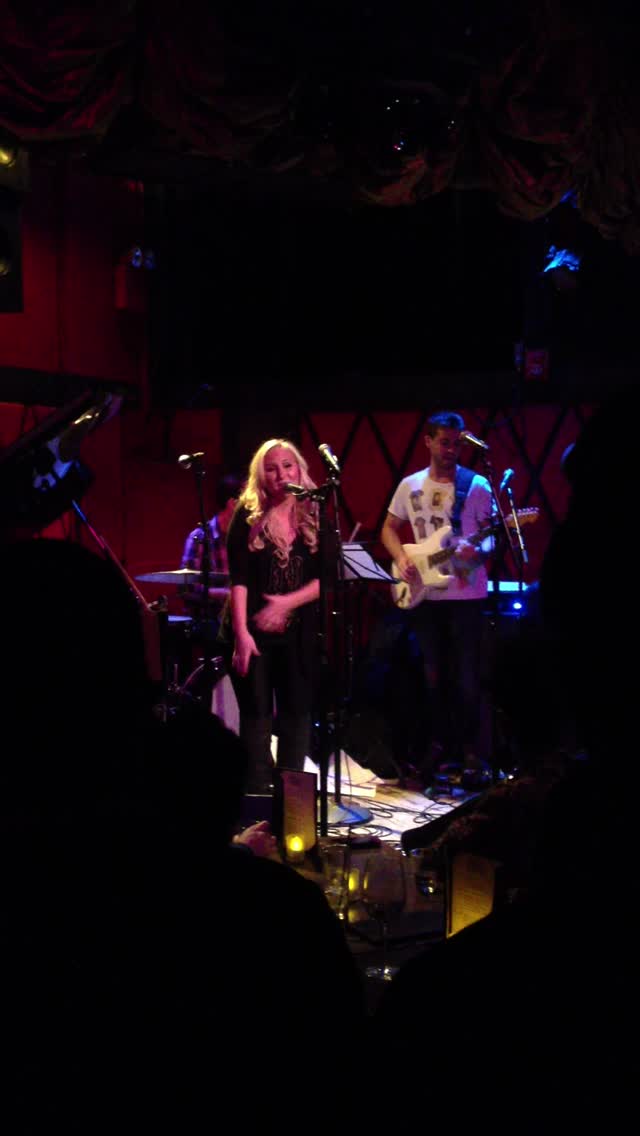 even the most dentally hygienic would’ve gotten a cavity. ugh. and it just kept coming. voice after voice message after message. aaron lavigne (spiderman: turn off the dark) singing ‘smile’ pulled us in with stark clarity much like a young jason mraz…brad greer with his beautifully heartfelt and wonderfully emotional plea from a son to his mama in ‘who i am’…tiny ashley blancher (beautiful: the carole king musical) a sassy and bedabbling version of scrappy doo let us know that she was ‘kinda over you’…mykal kilgore whose comedic timing and crazy vocal gymnastics (most of which are not included in the video…you shoulda been there) provoke uproarious applause and from-the-gut laughter
mykal kilgore 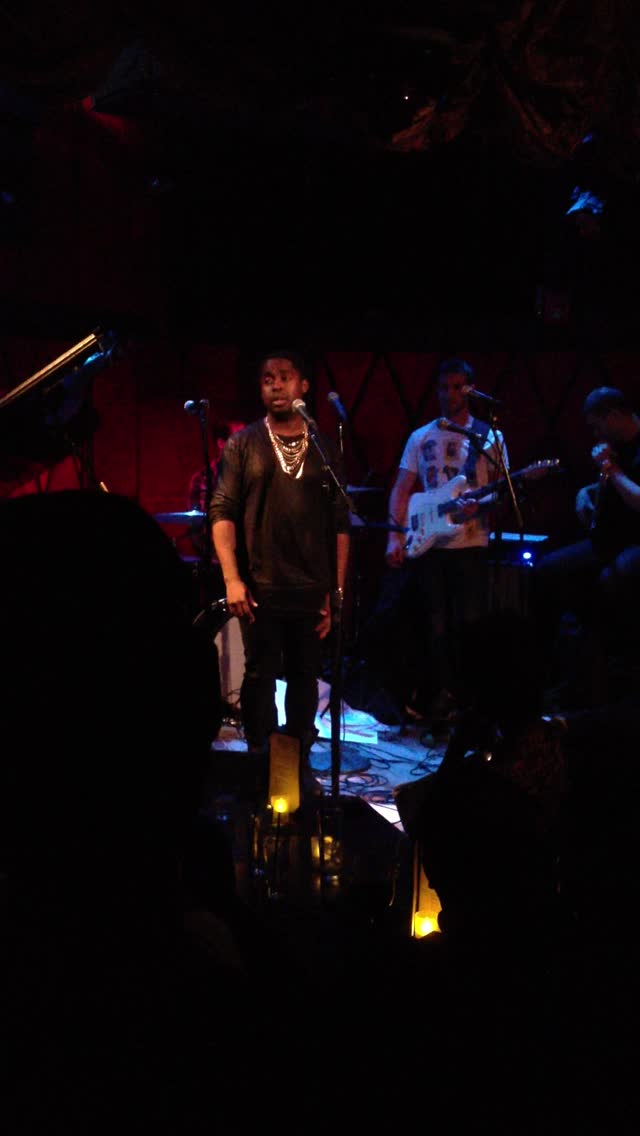 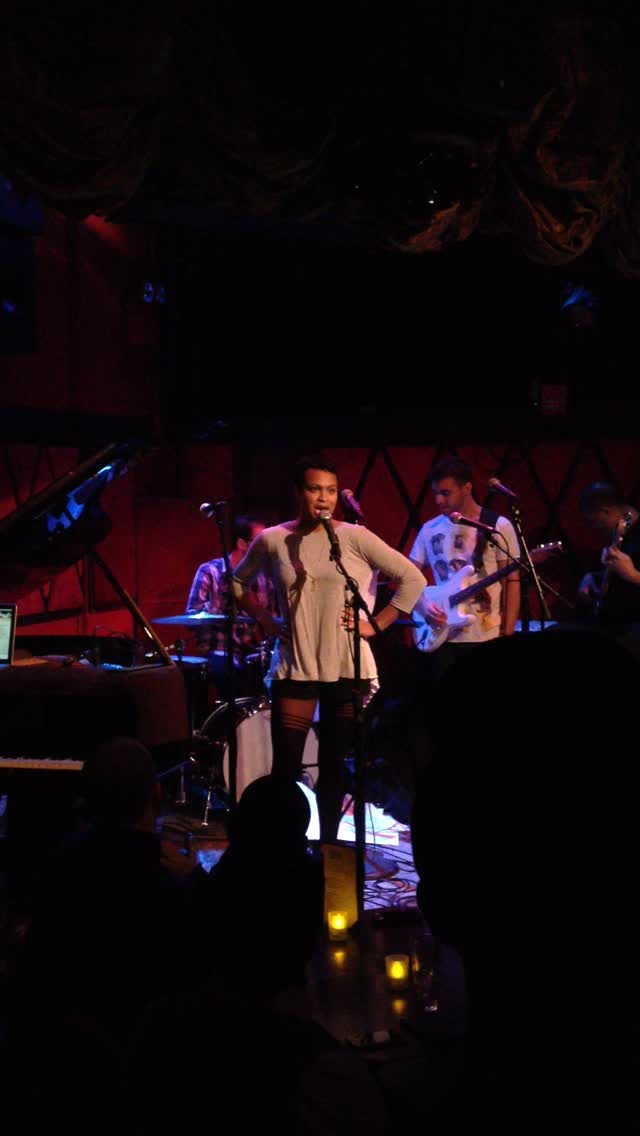 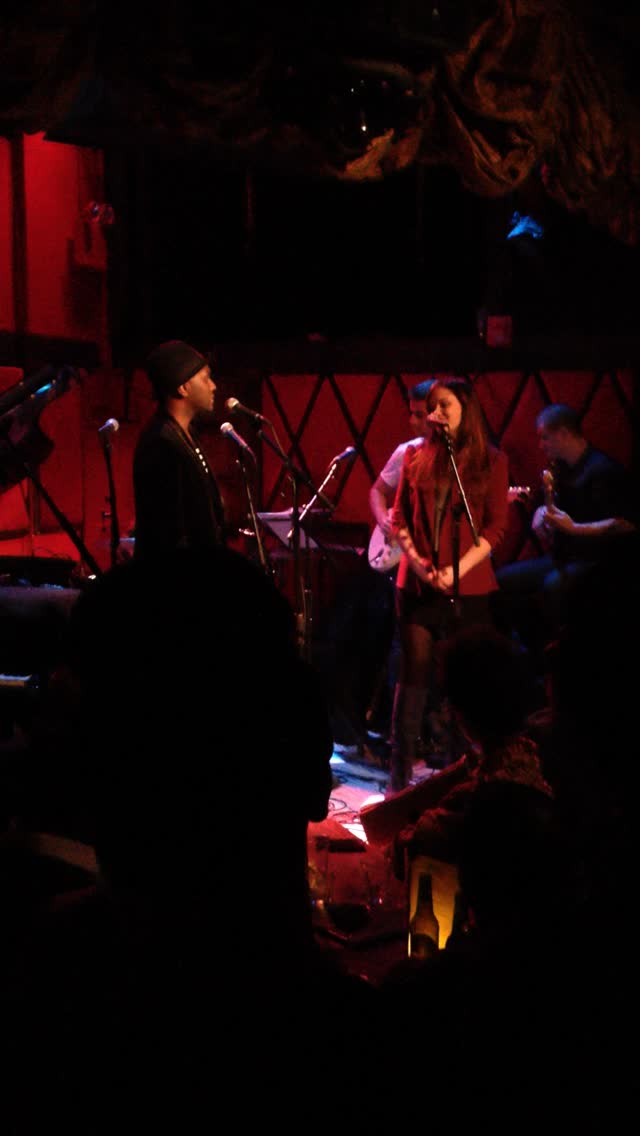 …and i refuse to end this review without the mention of a flat out sexy number that would make the most consciously celibate individual want to…play. suitably named ‘the sexy song’, brandon victor dixon (motown) made everybody sweat. i have a clip, but you need to hear it in its entirety. CLICK.

it’s one thing to have brilliant music. it’s another thing to have brilliant people singing brilliant music. fortunately december 9th from 9pm to 10:30pm both smacked me across the face. maybe you were there. then you know what i’m talkin’ about. if you weren’t do yourself a favor and download the album ‘#love live‘. for real. the face of music theatre is changing…and it kinda looks like lyons & pakchar. hopefully, these two men are proud.