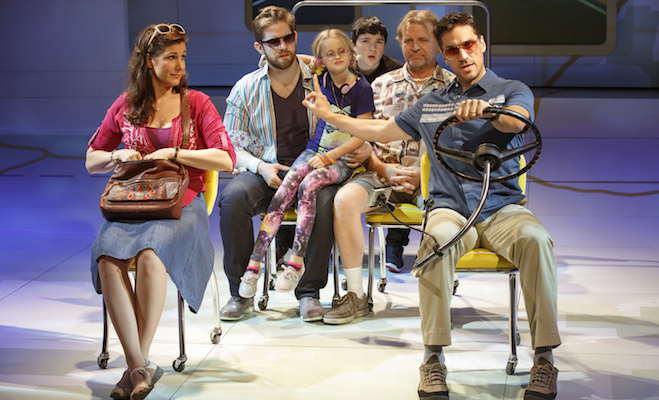 On life’s twisty road, sometimes you need to pull over and change direction. When the coveted title of “Little Miss Sunshine” is unexpectedly within her reach, young Olive Hoover convinces her family to make the 800 mile trek to the pre-teen pageant of her dreams. Along the way, a series of mishaps threatens to derail the group’s quest for the crown, until they realize a young girl’s far-fetched goal may actually hold the key to the family’s happiness. From the Tony Award-winning team of James Lapine and William Finn comes LITTLE MISS SUNSHINE, a new musical comedy about one modern family’s unexpected route to brighter days. LITTLE MISS SUNSHINE is based on the film, Little Miss Sunshine, written by Michael Arndt.

James Lapine and William Finn’s previous collaborations include the Tony-winning hits Falsettos and The 25th Annual Putnam County Spelling Bee. William Finn is also the composer of In Trousers, Romance in Hard Times, and A New Brain. James Lapine is the book writer/director of the musicals Sunday in the Park with George, Into the Woods, and Passion, among others.

LITTLE MISS SUNSHINE features scenic and projection design by Beowulf Boritt, costume design by Jennifer Caprio, lighting design by Ken Billington, and sound design by Jon Weston. Choreography is by Michele Lynch. The music director is Vadim Feichtner, orchestrations are by Michael Starobin, vocal and dance arrangements are by Will Aronson.

3 and 4-play subscriptions are available and begin at $180. Packages include Little Miss Sunshine, The Happiest Song Plays Last by Quiara Alegria Hudes and directed by Ruben Santiago-Hudson and Sex With Strangers by Laura Eason and directed by David Schwimmer. One show is yet to be announced. Subscription packages may be purchased by phoning 212-246-4422 or online at www.2ST.com.

$30 UNDER 30 YOUTH ADVANCE TICKETS AVAILABLE – patrons age 30 and under may purchase a limited number of specially-priced tickets starting at $30 in advance to select performances. Proof of age must be shown at the box office.

A limited amount of student rush tickets are $23.00 with valid student I.D.

Founded in 1979 under the leadership of Artistic Director Carole Rothman, SECOND STAGE THEATRE produces a diverse range of premieres and new interpretations of America’s best contemporary theatre, including Tiny Alice and Peter and Jerry by Edward Albee; The Good Times Are Killing Me by Lynda Barry; The Little Dog Laughed by Douglas Carter Beane; Little Murders by Jules Feiffer; The 25th Annual Putnam County Spelling Bee by William Finn and Rachel Sheinkin; A Soldier’s Play by Charles Fuller; Afterbirth: Kathy & Mo’s Greatest Hits by Mo Gaffney and Kathy Najimy; Becky Shaw by Gina Gionfriddo; Painting Churches and Coastal Disturbances by Tina Howe; Ricky Jay and His 52 Assistants and On the Stem by Ricky Jay; Next to Normal by Tom Kitt and Brian Yorkey; Living Out by Lisa Loomer; This Is Our Youth and The Waverly Gallery by Kenneth Lonergan; Some Men by Terrence McNally; By the Way, Meet Vera Stark by Lynn Nottage; eurydice by Sarah Ruhl; Everyday Rapture by Dick Scanlan and Sherie Rene Scott; Let Me Down Easy by Anna Deavere Smith; Saturday Night by Stephen Sondheim; Crowns by Regina Taylor; Uncommon Women and Others by Wendy Wasserstein; Spoils of War by Michael Weller; Before It Hits Home, Jar the Floor and Birdie Blue by Cheryl L. West; Jitney by August Wilson; Lemon Sky, Serenading Louie and Sympathetic Magic by Lanford Wilson; and Metamorphoses and The Notebooks of Leonardo da Vinci by Mary Zimmerman.

Second Stage Theatre has acquired the right to purchase the historic Helen Hayes Theatre, located at 240 W. 44th Street. With this new home, Second Stage will be the only theatre company on Broadway dedicated exclusively to the development and presentation of contemporary American theatrical productions. Second Stage will also become one of only four non-profit theatre companies that own and operate theatres on Broadway. The company will continue to lease and operate their original theatres on the city’s Upper West Side and in Midtown Manhattan.