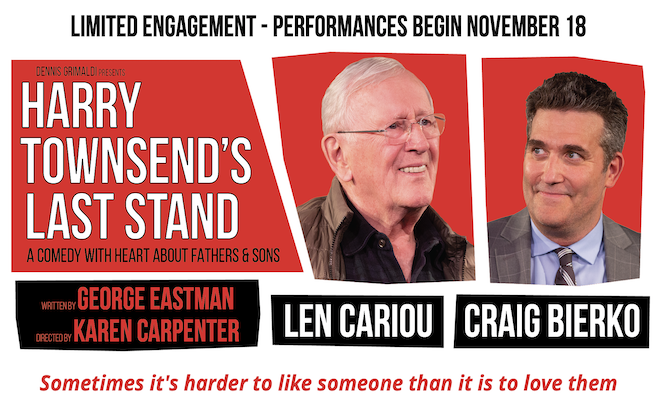 A comedy with heart, Harry Townsend’s Last Stand centers around 85-year-old Harry Townsend, a widower, living alone in the Lakeside home he builtin Vermont. While he still possesses a sharp mind and a dry wit, he is getting up there in age. Beside his daughter, Sarah, the one happiness in his life is his son, Alan, who is finally coming home after an 18-month absence. Yet Alan’s return is accompanied by an agenda that puts the aging father and his concerned son at odds. Harry Townsend’s Last Stand tells a story of complex family dynamics, passion, humor and the shorthand of communication that we have with our loved ones.

LISTINGS INFORMATION:Harry Townsend’s Last Stand begins a strictly limited engagement at New YorkCity Center Stage II (131 West 55th Street between 6th and 7th Avenues) on November 18. Opening night is December 4. Performances are Monday-Tuesday at 7:30PM, Thursday at 2:30PM and 7:30PM, Friday at 7:30PM, Saturday at 2:30PM and 7:30PM and Sunday at 3:00PM. Tickets are from $59-89.00 with premium reserved seating available. All tickets are subject to a $2.50 facility fee. Tickets are available online at NYCityCenter.org, by calling CityTix at (212) 581-1212, or in person at the City Center Box Office.

Len Cariou (Harry Townsend) is The Tony Award-winning veteran of the stage and screen with a career lasting more than five decades. Cariou made his Broadway debut in The House of Atreus, and starred in Henry V. Two years later, Cariou landed his first starring role opposite Lauren Bacall in Applause, a musical adaptation of the film “All About Eve”, which earned him a Tony Award nomination as Best Actor in a Musical and won him the Theatre World Award. In 1973 he garnered his second Tony nod for Stephen Sondheim and Hugh Wheeler’s musical A Little Night Music; he repeated the role of Fredrik for the 1977 film version opposite Elizabeth Taylor. Six years later he won both the Tony and a Drama Desk Award for his portrayal of the title character in Sweeney Todd: The Demon Barber of Fleet Street, another Stephen Sondheim musical in which he starred opposite Angela Lansbury. His other stage projects included the Alan Jay Lerner-Charles Strouse musical Dance Little a Little Closer, Arthur Miller’s sole musical Up From The Paradise, Night Watch, Cold Storage, The Speed of Darkness, Neil Simon’s The Dinner Party(with Henry Winkler and John Ritter) and Proof (with Anne Heche and Neil Patrick Harris). He worked as a director for Don’t Call Back on Broadway. His off-Broadway appearances include Master Class, Papa (Ernest Hemingway one man show) and Mountain (Justice William O. Douglas). On the small screen, he is known for his role as Harry Regan, The Police Patriarch of The Regan Clan on hit CBS television series “Blue Bloods,” as well as appearing in multiple episodes of the popular television mystery series “Murder She Wrote,” where he united with Angela Lansbury. Cariou’s film credits include “Flags of Our Fathers,” “About Schmidt,” “Thirteen Days,” “The Four Seasons,” “Secret Window,” in which he starred alongside Johnny Depp, and the Academy Award winner for Best Picture “Spotlight.” Cariou portrayed Franklin D. Roosevelt in the HBO movie “Into the Storm,” earning an Emmy nomination for Outstanding Supporting Actor in a Miniseries or a Movie.

George Eastman (Playwright). After seeing two plays on Broadway that his uncle Carroll Moore had written (Make A Million and Send Me No Flowers), George Eastman decided he wanted to be a writer. His first full-length play, The Snow Job, was published by Samuel French and has been produced in several community theaters throughout the country. His next play, Lost In The Field, was produced at the Northampton Center For The Arts. His one-act play, Bitter Exchange, won a performance at the New Works Play Festival in Pittsburgh.  When he retired after four decades of teaching French to fidgety eighth-graders, he enjoyed his restored energy and wrote his first novel, The Penelope Peters Effect, and he is currently shopping it for representation. After winning several short fiction contests in Western Massachusetts, his wife convinced him to turn one of the stories, “Harry Townsend’s Last Stand,” into a play. It was recently given a staged reading by the American Theatre Group at the SOPAC and starred Len Cariou and Warren Bub, and was directed by Dennis Grimaldi. He is now working on three other full-length plays: Last Call, about the strength and weakness of old friendships in the last politically incorrect bar in town – Molly and Max, about a snappy old coot and a sparkling old cootette who fall in love in cautious steps, and Creature Comforts, about three old codgers by a fire-pit who try to sum up their lives before they die. Mr. Eastman lives on Cape Cod with his wife Susan.