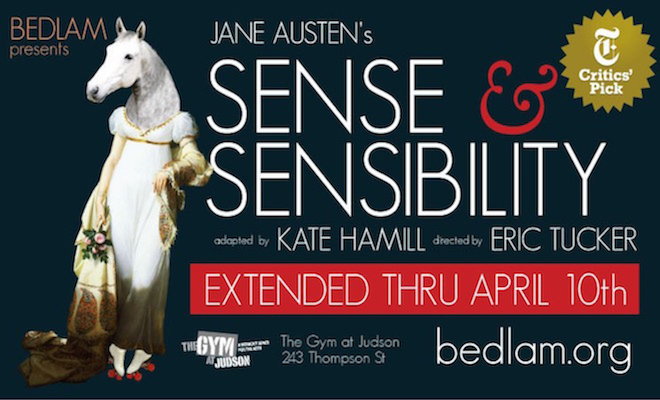 “I go to a lot of theatre in New York where I live and this is one of the best things I’ve ever seen here!”
– Ira Glass, NPR

“New York Times Critics’ Pick! Bedlam’s delightful SENSE & SENSIBILITY is a MUST-SEE SHOW that expands and magnifies Austen’s delicate comic worldview without cracking a single teacup. An enchanting romp of a play. You’ll be surprised by the riotous laughter, and equally likely to find yourself shedding discreet tears. This production is a triumphant joy in giving such defiantly theatrical form to a literary narrative.”
– Ben Brantley, The New York Times

The Time Out New York Critic’s Pick is directed by Eric Tucker and adapted for the stage by Kate Hamill, SENSE & SENSIBILITY has scenic design by John McDermott, lighting design by Les Dickert, costume design by Angela Huff and choreography by Alexandra Beller.

You’ve never seen Austen like this! 2016 OBIE Award-winning BEDLAM’s rollicking adaptation follows the adventures (and misadventures) of the Dashwood sisters – sensible Elinor and hypersensitive Marianne – after their sudden loss of fortune. Bursting with humor, emotion, and bold theatricality, SENSE & SENSIBILITY asks: when reputation is everything, how do you follow your heart?

TICKET INFORMATION
Tickets range from $69 to $99, and are available at www.bedlam.org (866-811-4111). Pending availability, $25 student rush tickets will be sold at THE GYM AT JUDSON box office 15 minutes prior to the start of each performance. Students with a valid ID are limited to two rush tickets per ID.

BEDLAM’s past critically acclaimed productions are enjoying runs across the country. Houston’s Stark Naked Theatre presented the BEDLAM production of SAINT JOAN, directed by Eric Tucker from June 3 through June 18, 2016. The production was named Best Visiting Production at the Houston Theater Awards. BEDLAM returned to Boston’s Central Square Theater following last season’s SAINT JOAN, with director Eric Tucker’s TWELFTH NIGHT and What You Will, one play, two completely different ways, with the same five actors from the original New York production, which ran from June 9 through July 10, 2016. The McCarter Theater Center in Princeton, NJ has announced they will be presenting BEDLAM’s HAMLET and SAINT JOAN in repertory from January 13, 2017 through February 12, 2017.

Committed to the immediacy of the relationship between the actor and the audience, BEDLAM creates works of theatre that reinvigorate traditional forms in a flexible, raw space, collapsing aesthetic distance and bringing its viewers into direct contact with the dangers and delicacies of life. In this new, fresh, active environment storytelling becomes paramount and the result is a kinetic experience of shared empathy.