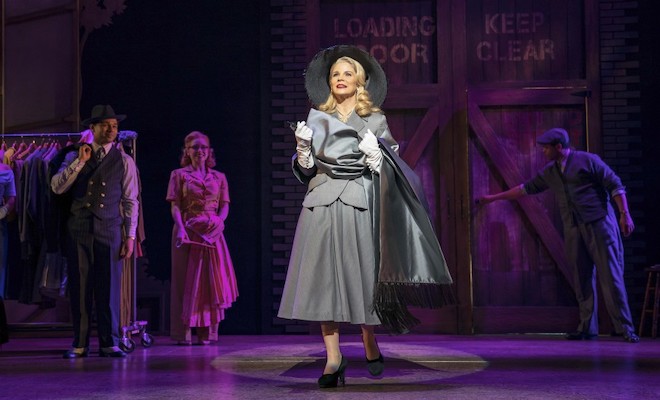 OPENS ON BROADWAY TO RAVE REVIEWS

CRITICS’ PICK! “KELLI O’HARA IS SUBLIME. She sings so gorgeously it almost melts the theatre.”

“KELLI O’HARA IS THE TOTAL PACKAGE—funny, commanding and her golden cords have never sounded so sweet. O’Hara deserves a thousand kisses along with our eternal worship for gracing us with two and a half glorious hours in this altogether wunderbar production.” – Roma Torre, NY1

“WILL CHASE ACES IT, with a powerful voice and acting chops to match.” – Roma Torre, NY1

“CORBIN BLEU IS SUCH A DYNAMITE PERFORMER you can’t help but share the joy rolling off him as he dances.” – David Rooney, The Hollywood Reporter

“THE STANDOUT AMONG THE SUPPORTING CAST IS UNQUESTIONABLY STEPHANIE STYLES, DELIVERING A CONFIDENT — NO, MAKE THAT SMASHING — BROADWAY DEBUT.”

Roundabout Theatre Company (Todd Haimes, Artistic Director/CEO) is pleased to announce a four-week extension of the new Broadway production of the musical comedy Kiss Me, Kate, after opening to rave reviews on March 14, 2019. This classic musical comedy is directed by Scott Ellis, choreographed by Warren Carlyle with music direction by Paul Gemignani and features a book bySam and Bella Spewack, and music and lyrics by Cole Porter.

In the constellation of musical comedy masterpieces, Kiss Me, Kate shines as perhaps Broadway’s most sparkling achievement. This is the winner of the first-ever Tony Award for Best Musical, alive with onstage romance, backstage passion, comedy high and low, a dash of Shakespeare’s The Taming of the Shrew, and a stylish, sexy, sophisticated songbook that includes “Too Darn Hot,” “So In Love” and “Always True To You In My Fashion.” Once again, Roundabout catapults you to musical comedy heaven, with a brand-newKiss Me, Kate.

Tickets for Kiss Me, Kate are available by calling 212.719.1300, online at roundabouttheatre.org, in person at any Roundabout box office: American Airlines Theatre Box office (227 West 42nd Street); The Harold and Miriam Steinberg Center for Theatre (111 W 46th Street) and Studio 54 (254 West 54th Street); or by visiting StubHub, The Premier Secondary Ticketing Partner of Roundabout. Ticket prices range from $59-$179. For groups of 10 or more please call 212-719-9393 x 365 or email groupsales@roundabouttheatre.org.

Major support for Kiss Me, Kate generously provided by The Blanche and Irving Laurie Foundation.

Citi is a proud sponsor of Kiss Me, Kate.

Off-Broadway in 2018-2019, Roundabout’s season continues with Merrily We Roll Along by Stephen Sondheim and George Furth, directed by Noah Brody in a Fiasco Theater production; Toni Stone by Lydia R. Diamond, directed by Pam MacKinnon; and Something Clean by Selina Fillinger, directed by Margot Bordelon at Roundabout Underground.

In 2020, Roundabout will present three new works Off-Broadway, including: 72 Miles to Go… by Hilary Bettis; …what the end will beby Jiréh Breon Holder, directed by Margot Bordelon; and Darling Grenadine, book, music & lyrics by Daniel Zaitchik, directed and choregraphed by Michael Berresse.