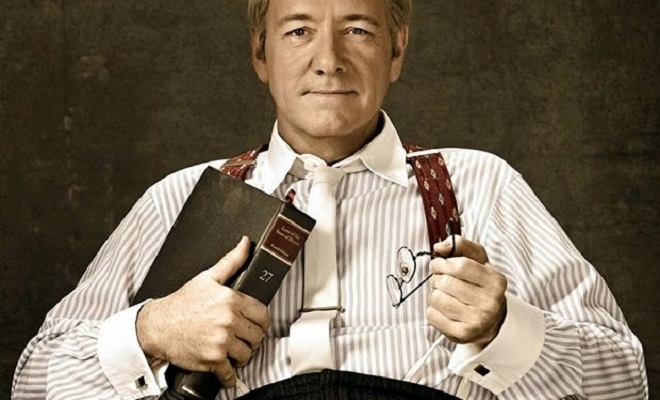 Witness it….
“Kevin Spacey is King of the Court” -The Observer

New York, NY (April 26, 2017) – Kevin Spacey will star in Clarence Darrow, the acclaimed solo show written by David. W. Rintels and directed by Thea Sharrock. First presented at the Old Vic Theatre in London, it will now come to New York for a unique two-night event at Arthur Ashe Stadium in Flushing, New York, on June 15th and 16th, 2017.

Mr. Spacey first came across the play Clarence Darrow when he was in high school. The one-man show made its Broadway premiere at the Helen Hays Theatre in 1974. The real Clarence Darrow was a courageous man at the turn of the last century. He was a lawyer who steadfastly accepted cases nobody would take, fighting on behalf of the underdog and standing up for labor unions as well as being a staunch opponent of the death penalty during a career which spanned over 40 years. Through his dignity, intelligence and logic he often managed to convince judges and jurors to change their view, shift their prejudice and opt for a humane punishment on behalf of those he defended. Spacey brings Darrow to life over the course of 90 minutes, in which Darrow with his legendary wit relives some of his extraordinary experiences and infamous trials that established his reputation as a courtroom giant and civil rights hero.

“Clarence Darrow was one of the most important attorney’s in the United States and I just love the idea of Darrow and Arthur Ashe coming together: both masters of two very different courts”, Spacey says. “Of course, drama happens all the time on Ashe, but never quite like this. I love a new challenge and this is an exciting opportunity to share Darrow’s remarkable story with a broader and more diverse audience than usually gets a chance to see theatre”.

Award-winning producer and actor, Kevin Spacey, received a Tony® Award in 1981 for Best Supporting Actor in Neil Simon’s Lost in Yonkers. Spacey also starred in the Broadway and West End productions of Long Day’s Journey Into Night opposite Jack Lemmon, as well as the title role in the Sam Mendes production of Richard III, which toured 12 cities around the globe part of the Old Vic/BAM/Bridge Project. He was made an Honorary Knight by Her Majesty Queen Elizabeth II and HRH Prince Charles for his services to theatre. In England, he served as Artistic Director of the Old Vic Theatre and received the Olivier Award for Best Actor for his role in The Iceman Cometh. Spacey also is a two-time Academy Award winner as well as a SAG Award, Golden Globe Award and Emmy Award winner. He currently stars in the hit Netflix series “House of Cards” where he also serves as Executive Producer. “House of Cards” will return for its 5th season on May 30th, 2017. On June 11th, 2017, Spacey will serve as Host of the 71st Annual Tony® Awards on CBS.

Making theatre accessible for students is key for Mr. Spacey and next week he will be announcing a special student price policy for the performances.
American Express® Cardmembers can get advance tickets for the two-night performances on June 15 & 16. Advance tickets are available Sunday, April 30 at 10:00am through Thursday, May 4 at 10:00pm. Preferred Seating available to Gold Card, Platinum Card® and Centurion® members.
The Arthur Ashe Stadium is located in Flushing Meadow/Corona Park in Flushing New York.