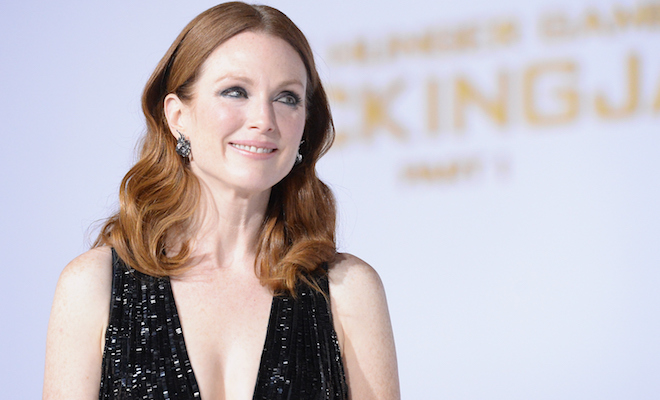 “We are truly honored that Julianne Moore is taking time out of her busy schedule to see Church & State and join in the conversation on a subject that she is so passionate about,” states Producer Charlotte Cohn.

Julianne Moore chairs the Everytown Creative Council, a group of more than 125 cultural influencers dedicated to ending gun violence. The Creative Council is part of Everytown for Gun Safety, which launched in 2014 through a combination of the groups Mayors Against Illegal Guns and Moms Demand Action for Gun Sense in America. Everytown has more than 3 million supporters and volunteers in all fifty states advocating for common sense gun laws like a background check on every gun sale and laws that keep guns away from domestic abusers. Ms. Moore proclaims, “I fervently believe that this is not a partisan issue. This is not an anti gun or pro gun argument – it’s not a second amendment issue and does not deserve to be hotly debated as such. It is a safety issue.”

In an earlier statement Ms. Cohn said the decision to produce this play was an easy one to make. “I like to say, Church & State is not just a play; it’s a movement. And that’s because this play is not just an entertaining piece of theatre, though it is that, too. But it’s also a conversation starter. A way to get people across the country with different points of view to come together after a shared experience in the theatre and talk about how we can deal with the issue of guns in America.”

Church & State is a fast-paced, seriously funny take on faith, politics, and “The Twitter.” Three days before his bid for re-election in North Carolina, a Republican U.S. Senator makes an off-the-cuff comment to a blogger that calls into question his belief in God. The Senator’s devoutly Christian wife and liberal Jewish campaign manager try desperately to contain the damage with mixed results. This brutally honest and surprisingly funny new play sheds light on how religion, guns, and social media influence our politics and our politicians. (No politicians were harmed in the making of this play.)

Originally developed with Artistic director Ralph Meranto and JCC CenterStage, Church & State was produced as a National New Play Network Rolling World Premiere at JCC CenterStage in Rochester and The Skylight Theatre in Los Angeles where it recently received three Ovation Award nominations including Best Playwriting for an Original Play, Best Production (Intimate Theatre), and Best Lead Actor in a Play.​ The Los Angeles Times praised it as “gripping entertainment,” and “simply superb,” while The Huffington Post called it “powerful, humorous and highly contemporary” and named it one of the Top Ten L.A. Theatre Productions of 2016.

Tickets are $59 – $105 and are available for purchase through Telecharge.com/212-239-6200. They may also be purchased in person at the New World Stages Box Office (340 West 50th Street. Visit www.newworldstages.com for box office hours.

*** The next talk back will be on Wednesday, April 19th with New Yorkers Against Gun Violence (NYAGV).