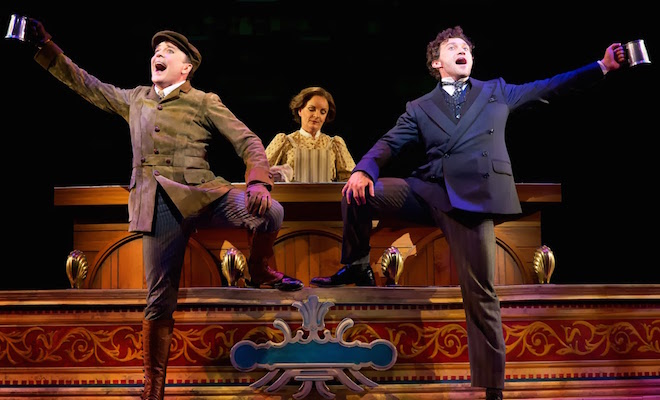 New York, NY (June 5, 2015) – It was announced today that Judy Blazer will join the cast of the Tony Award® winning Best Musical, A Gentleman’s Guide to Love and Murder, in the role of Miss Shingle.  She will begin performances on Tuesday, June 30.  Carole Shelley, who currently fills the role, will play her final performance on Sunday, June 28.

Judy Blazer starred on Broadway in Me and My Girl (Sally), A Change in the Heir (Prince Conrad), Titanic (Lady Caroline), and Neil Simon’s 45 Seconds from Broadway (Cindy), and played Brecht’s mistress in LoveMusik directed by Harold Prince. Off-Broadway, she has appeared in Candide and Sweeney Todd with the New York City Opera, Hello Again (Drama Desk nom.) and The House of Bernarda Alba for the Lincoln Center Theater, The Torch Bearers for the Drama Department, Hurrah at Last at the Roundabout Theater and the New York City Center Encores! production of A Connecticut Yankee. She also performed a solo piece for Primary Stage’s Inner Voices series, David Simpatico and Josh Schmidt’s Whida Peru: Resurrection Tangle, directed by Jonathan Butterell. Her extensive region credits include the title roles in Funny Girl at the Sundance Theater, The Miracle Worker at the George Street Playhouse, My Fair Lady at the Paper Mill Playhouse, the Pittsburgh CLO and the 5th Avenue Theater in Seattle, Peter Pan at Artpark and The Night Governess at the McCarter Theater in Princeton. She portrayed Luz in Giant at the Signature Theater in Washington, DC, Lily Garland in On the Twentieth Century with the American Musical Theater of San Jose, Maria in Twelfth Night at the Long Wharf Theater in New Haven and Flora in No Way to Treat a Lady at the Cape Playhouse. In 2012 she played Vera in the Goodspeed production of Mame; in 2013, Maria Merelli in the Paper Mill Playhouse and Bay Street Theater productions of Lend Me a Tenor, and in 2014, Joanne in the Pittsburgh Public Theatre production of Stephen Sondheim’s Company.  Her film credits include song and voice characterizations for the animated films Anastasia (1997), Beauty and the Beast: The Enchanted Christmas (1997), and Buster and Chauncey’s Silent Night (1998). She also played a major role (Chris) in Shelly Silver’s critically acclaimed art film, The Houses that Are Left (1989). On television, Judy has been seen in Law and Order (both as Defense Attorney Simon and as convicted murderer Clara Porazzi), As the World Turns (Ariel), Guiding Light (Marissa), and as a featured artist on three PBS specials: Leonard Bernstein’s New York, In Performance at the White House, and – in March 2012 – Great Performances: The Thomashefskys.

Gentleman’s Guide tells the uproarious story of Monty Navarro, a distant heir to a family fortune who sets out to jump the line of succession, by any means necessary. All the while, he’s got to juggle his mistress (she’s after more than just love), his fiancée (she’s his cousin but who’s keeping track?), and the constant threat of landing behind bars! Of course, it will all be worth it if he can slay his way to his inheritance… and be done in time for tea. The Hollywood Reporter raves, “Gentleman’s Guide restores our faith in musical comedy” and The New York Times calls it “Hilarious!” and cheers, “it will lift the hearts of all those who’ve been pining for what sometimes seems a lost art form.”  Time Out New York declares, “Gentleman’s Guide is the undisputed king of musical comedy!”

It was recently announced that A Gentleman’s Guide to Love & Murder, will launch its First National Tour in September 2015. The tour route includes stops in Los Angeles, Chicago, San Francisco, Dallas, Washington DC, and Toronto, among many other markets.  In April, Gentleman’s Guide announced the recoupment of its entire Broadway production capitalization.   The most celebrated musical of the 2013-14 Broadway season, Gentleman’s Guide received a leading ten 2014 Tony® Award nominations, eventually winning four awards: Best Musical, Direction of a Musical, Book of a Musical, and Best Costume Design.  In addition, it won the Best Musical prizes from the Drama League, Drama Desk and Outer Critics Circle, and received a 2015 Grammy® Award nomination for Best Musical Show Album. The Broadway production holds the house records at the Walter Kerr Theatre for both the highest single-week gross ($1,062,740.60 over eight performances on the week ending December 28, 2014) and total cumulative gross, which now stands at approximately $58 million. Gentleman’s Guide opened at Broadway’s Walter Kerr Theatre to overwhelming critical acclaim on Sunday, November 17, 2013.

The performance schedule for A Gentleman’s Guide to Love and Murder is as follows: Tuesday and Thursday at 7:00 PM, Wednesday, Friday and Saturday at 8:00 PM, Sunday at 3:00 PM, with 2:00 PM matinees on Wednesday and Saturday.