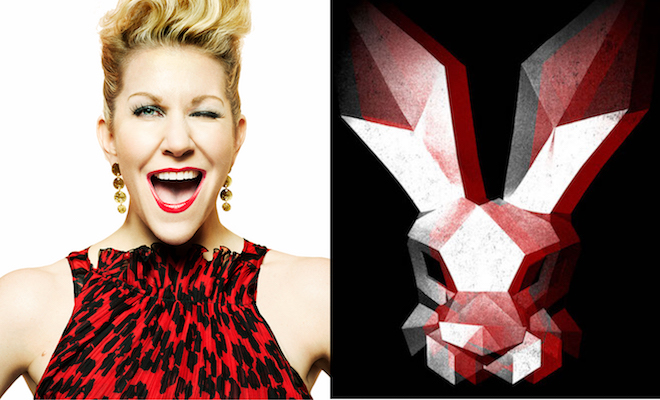 NOW PLAYING IN A LIMITED ENGAGEMENT
AT WESTSIDE THEATRE

“A DAZZLING, TRANSCENDENT piece of ALIVE AND KICKING theater.
The whole building felt like it was LIVING AND BREATHING.”
“The play is SHARP…and AB-CRUNCHINGLY FUNNY.”

“A PLAYFUL, ENIGMATIC AND HAUNTING SHOW that takes on a gravity that prickles your skin, and keeps taking unexpected turns that often lead us back to the relief of laughter. Any worthy theatrical experience is a dive down into a rabbit hole, where the destination is unknown. The distinction of ‘White Rabbit Red Rabbit’ is that the performer moves right alongside us on the journey.”

Multi Grammy Award winner of the 2016 Best Classical Solo Vocal Album (Joyce and Tony: Live at Wigmore Hall) and the 2012 Best Classical Vocal Solo, Kansas-born Joyce DiDonato entrances audiences across the globe, and has been proclaimed “perhaps the most potent female singer of her generation” by the New Yorker. With a voice “nothing less than 24-carat gold” according to the Times, DiDonato has soared to the top of the industry both as a performer and a fierce advocate for the arts, gaining international prominence in operas by Handel and Mozart, as well as through her wide-ranging, acclaimed discography. She is also widely acclaimed for the bel canto roles of Rossini and Donizetti and has recently held residencies at Carnegie Hall and at London’s Barbican Centre, toured extensively in South America, Europe and Asia and appeared as guest soloist at the BBC’s Last Night of the Proms. Recent highlights in opera have included her first Charlotte in Werther for The Royal Opera under Sir Antonio Pappano, the title role in Maria Stuarda at the Metropolitan Opera, for The Royal Opera and at the Liceu in Barcelona; the title role in Alcina on tour with the English Concert and Harry Bicket and Marguerite La damnation de Faust with the Berlin Philharmonic under Sir Simon Rattle. DiDonato opens her 2016/17 season in a gala concert with the Seattle Symphony Orchestra under Ludovic Morlot; she will also give concerts with the Chicago Symphony Orchestra under Riccardo Muti and the Berlin Philharmonic under Yannick Nézet-Séguin; and a recital with Philippe Jordan in Paris. On the opera stage, she makes her much anticipated debut in the title role of Semiramide in a new production at the Bavarian State Opera under Michele Mariotti; the title role in Ariodante on tour with the English Concert and Harry Bicket; Dido (Les Troyens) under John Nelsons in Strasbourg; and Sesto (La Clemenza di Tito) under Nézet-Séguin in Baden-Baden.

Tickets to performances of WHITE RABBIT RED RABBIT are available via Telecharge.com/212-239-6200, or at the Westside Theatre Box Office (407 W 43rd Street). The performance schedule is Monday evenings at 8:00pm.

A portion of the play’s profits go to PEN International, the world’s leading association of writers working to promote literature and defend freedom of expression around the world (www.pen-international.org). WHITE RABBIT RED RABBIT is produced by Maberry Theatricals (Devlin Elliott and Tom Kirdahy), in association with Aurora Nova Productions and Boat Rocker Entertainment.