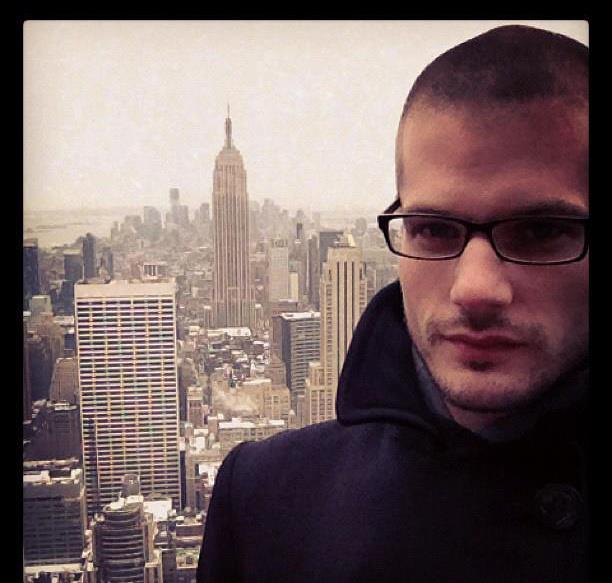 Jay Brannan: Around The World In 80 Jays Interview Jay Brannan is one the world’s biggest indie recording artists. With over 125 online videos, Jay has had over 8.5 million views. Jay travels the globe performing his music to sold-out crowds, a mixture of original compositions and covers. With the release of his newest album, Around The World In 80 Jays, Jay Brannan is bringing all of his fans together by releasing an album of multi-lingual covers.

1. You are about to release your latest album “Around The World in 80 Jays,” which you titled based upon your touring around the world. What is your favorite part about touring? What challenges do you face on the road? I guess my favorite part is just having the chance to travel the world playing my songs for people, and that people show up 🙂 Sometimes they even seem really excited to be there, or know the words to some of the songs haha. That’s all very exciting and surreal. Getting to explore so many foreign places has really changed my life, and introduced me to a new addiction that now extends beyond traveling only for work, whenever possible 🙂

I think the biggest challenge while touring is the pace…It’s hard to stay awake when you travel all day every day, work all afternoon & night (I don’t just show up, play, and leave — there are hours of work before & after a show, which many people don’t realize), then wake up and do it all over again the next morning…for weeks! I get tired of lugging all my bags around the globe haha. But i’m lucky, I can’t really complain.

2. What have you learned about yourself and this world we live in from touring the globe? Well at the risk of almost quoting American Beauty there is quite a lot of beauty in the world. It’s no secret through my music & public persona that I am not the biggest fan of the human race haha. There is a lot of evil and pain and disappointment in the world. But the history and the architecture and the food and the artistry and the ingenuity…all of that comes from people too, and some of it is quite mind-blowing. Getting out of bed or staying upright for long periods of time is not really my natural state of being haha, so all this booking & touring & traveling & working has certainly taught me that I am capable of more than I think I am. 🙂

3. How do you feel your live shows have grown/evolved since you’ve started performing? Well the audience sizes have grown, and I went from playing tiny open mics in New York City to headlining my own shows in places as far away as Australia, Europe, Israel, Brazil…I think over time I’ve become a bit more comfortable, although I’m still often nervous, which allows me to be more myself, and I think people appreciate that. I put a lot of effort into making my shows feel casual & real & personal, if that makes any sense. My catalog has grown immensely. I used to not have enough material to put together a 30-minute set, and now I have a hard time choosing which songs to play under a 75 minute limitation 🙂 Jay Brannan with his fansJay Brannan and his fans4. You always take time before and after your concerts to interact with your fans. What do you enjoy most about meeting your fans? What has been the most heartwarming story you’ve come across? What has been the most outrageous fan moment you’ve had thus far? I do it because I appreciate that people show up & spend their time and money on coming to support what I do. It means a lot to me, and apparently it means something to many of them to have a personal moment to say hello or get a photo or whatever. I’m incredibly shy and socially anxious, so it’s not easy for me and has taken practice. But I do it because I feel I should, and I am sincerely grateful for people’s support. I’ve had some very moving stories, particularly through email — some so moving i’m not even sure if they are true haha. I won’t share any outrageous fan moments, but there are def some insane stories…I prefer to not fan the flames of those situations by discussing them publicly. haha.

5. One of your touring stops this time around is at Joe’s Pub in NYC on September 6 & 7. What excites about coming back to Joe’s Pub? Why do you love performing there? Well NYC has been my hometown for 10 years now, so there’s that home-turf feeling of playing in New York — having consistently strong turnouts & your friends showing up to support you, etc. Joe’s Pub is one of my favorite small venues anywhere. It’s a great room with great sound and they are such a pleasure to work with. It just feels good to sing there, and the vibe is friendly and supportive. It’s an absolutely legendary spot and has done SO much to foster the arts scene of this town. It’s really an honor to play there. AND THEY PUT MY FACE ON A KIOSK OUTSIDE ON THE SIDEWALK!!! What more could I ask for. I’m excited about that. Haha. 6. September 6 is the CD release/party for Around the World in 80 Jays. and September 7 is a fan request concert. Why did you choose to split your shows this way? What has been the response thus far for the fan request night? Are you surprised by any of the requests? Oh I don’t know, the shows tend to sell out in advance here, so I figured I’d try doing 2 nights. I get a bit bored & feel too much pressure about being repetitive, so I thought I’d build in a new way to keep it different for myself. Haha.

The voting felt like a fun idea, and the response has been huge. Some of the top songs are not so surprising — the ones people usually request. But others are a bit surprising, if not maybe a bit annoying, as it means I have to re-learn songs I never play anymore. Haha. That’s probably why people are taking the opportunity to request them 🙂

Jay Brannan in Egypt7. What can fans expect from you on Around The World in 80 Jays? It’s a multilingual covers EP. 3 songs are in English, and 6 are in various other languages. It’s stripped-down and simple, like a lot of my recorded stuff, with some accenting on certain tracks from other instruments. I’m really happy with how it’s turned out, I’m super excited for people to hear it. Hopefully they like the tracks, and have a sense of humor about it as well. It was just fun to make & something I’ve wanted to do for a long time.

8. What made you want to do another album of cover songs as opposed to original music? I don’t write fast enough to do annual original music albums, and also those take a bit more time & budget to make. This was meant to be 4 or 5 songs recorded in a neighborhood studio I found on Craigslist. But I got so into it, and was so pleased with the results, that I kind of kept going until there were 9 tracks and some simple arrangements. I’m working simultaneously on another album of originals, but that is a really long process from conception to release.

Jay Brannan in New York City9. In this day and age of social media, how do you feel social media platforms have helped your career grow? Social media is basically responsible for my career. It’s the ability to connect directly with listeners for little to no financial investment upfront (although that is changing, for example Facebook handicaps the reach of your posts to your own fans now, unless you pay) that has allowed me to reach my audience, and to continue to help it develop and grow. Even in the early days of Myspace, Shortbus (a film I acted in and had a song in) was being released around the world, so people would Google me, and find my Myspace page — which would just be on the web doing marketing for me even while I was asleep 🙂 Social media has become this big overwhelming beast, and it has become more & more difficult to stand out (because it has become so overloaded with content), but…we’re all using it because it works. Even with it’s flaws & frustrations, it’s still a hugely important tool.

10. In addition to singing, are there other aspects of entertainment, you’d like to work in? I still have acting aspirations. I travel a lot and music sucks up a lot of my time & energy, but I get to audition for film & tv roles now and then. I’d love the chance to do more of that. Sometimes I have fantasies of writing a book or a play or a screenplay…who knows. I really don’t know what the future holds, I just try to take one day at a time and see where my feet take me 🙂