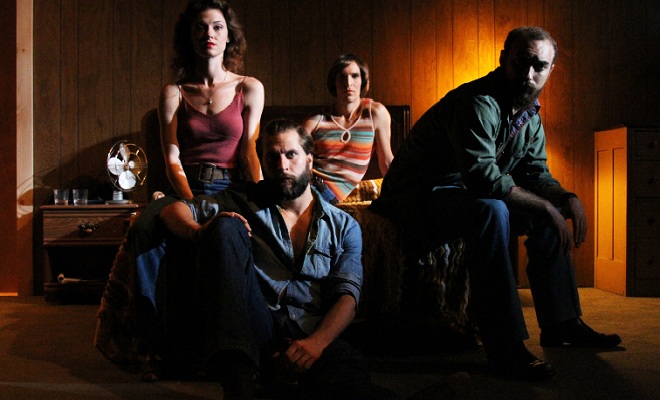 IS THIS A SECRET TO OFF-OFF BROADWAY SURVIVAL?

CollaborationTown’s Family Play (1979 to Present) zips by in under two hours, yet it still seems to encompass everything that could happen to thirtysomething suburban Americans, from loving and hating and grieving your parents to falling in and out of relationships to starting a family of your own.

Yet two years ago, when the show was finding its legs, it wasn’t nearly so snappy. “Our first workshop was five hours long,” says Boo Killebrew, a co-writer and performer, plus one of CTown’s co-artistic directors. “We said, ‘We want to experiment with duration!’ And then after we did it, we said, ‘No we don’t!’”

The point, though, is that they had the time and space to figure out how long their show should be. That’s because Family Play was developed through the Archive Residency, a project of the New Ohio Theatre and IRT Theater, which are both in the Archive Building on Christopher Street.

In each Residency cycle, two theatre ensembles are selected for a two-year program. They develop new work through a series of rehearsals and workshops, including a berth in the Ice Factory Festival. At the end of their term, they both premiere a show at the New Ohio.

CollaborationTown was in the Residency’s first class, and Family Play, which runs through May 16, is the first show to emerge from the project. The second world premiere—the Mad Ones’ The Essential Straight and Narrow—runs from May 22-June 14.

The Residency began almost immediately after New Ohio moved into the Archive Building in 2011. Like IRT, it has a long history of developing and producing new work by edgy artists, so when both companies had permanent homes in the same space, a partnership felt inevitable.

According to New Ohio artistic director Robert Lyons, he had barely gotten the door open when Kori Rushton, IRT’s artistic director, suggested joining forces. “It was that ‘get to know your neighbor’ conversation that started everything,” he says. “We have a belief in all these small theatres that don’t have a home. We see our function as providing resources to those companies and promoting them.” And the companies certainly need the support. Just ask Joe Curnutte, a co-artistic director of The Mad Ones. “To put it bluntly, successful downtown theatre wouldn’t happen if it weren’t for residencies like this,” he says. “You see smaller theatres closing their doors. You see rental costs for rehearsal spaces and performance spaces going up. Ensemble theatre needs this kind of support.”

Which brings us back to CTown’s show, which has changed drastically in the last two years. Along with being five hours long, for instance, the original piece also gave the characters names, letting audiences track specific people as they aged from childhood to adulthood.

Now those names are gone. Instead, the show features hundreds of short scenes divided into chronological groups, letting us track larger themes instead of individual journeys.

“With this process, we really had the time to explore every option,” Killebrew says. “And we finally said, ‘Okay, everyone is everyone is everyone.’ Let’s make it more of a cumulative event.”
The Mad Ones’ show is also unusually structured. In The Essential Straight and Narrow, a folk-rock trio in 1974 finds itself in a ghost-town motel, and from there, we slowly piece together what’s happening to them.

Since they both avoid traditional storytelling, it seems fitting that these shows are inaugurating the Archive Residency, and though the companies didn’t collaborate artistically, they did commiserate, see each other’s work, and occasionally leave funny notes for each other in the rehearsal space.

That sense of community is another benefit of the Residency, which currently has two companies at the one-year mark and will bring two more into the fold this fall. “It’s important for downtown companies to support each other and for us not to view each other as competition on a battlefield,” says Curnutte. “It should be more like this, where we can support each other.”