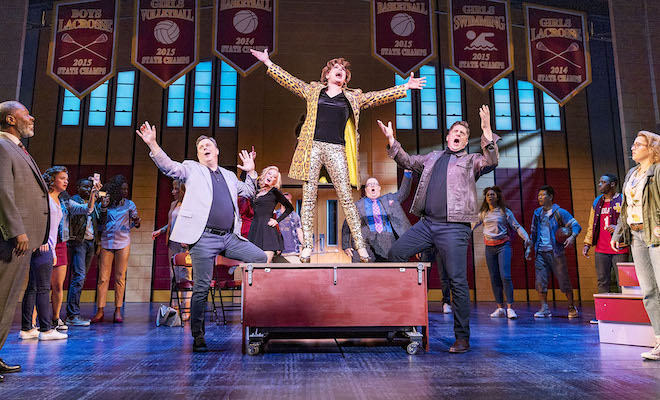 My Chat with Beth Leavel

Beth Leavel: On stage or in movies? I never really saw musicals, I never had the opportunity to in North Carolina, but I remember the first musical I saw was the movie The Music Man with Robert Preston. I remember disappearing into the scene and wanting to be in that marching band—kind of leaving my body. But one of the first musicals I ever saw on stage was probably one I did, which was Brigadoon my senior year in High School. I’m so envious of my fiancé, who grew up close to New York; it was a ritual for his family to see all these musicals; he had a catalog of all these musicals imprinted on him when he was young. I was a late-bloomer at that.

MS: So that’s the first musical you ever performed in?

BL: Yes. Maybe I did something in elementary school, but that doesn’t really count. But I do remember getting laughs though–even at that young age, and going, “Oh, that felt good. How do I do that?!”—in 5th grade.

MS: Is there any one single performer who inspired you to get into theater or shaped the way you perform?

BL: One of the first musicals I did when I got to New York was 42nd Street and I remember being so informed by these powerful women in the show. There were a lot of cast changes, but I remember looking at Millicent Martin and thinking, ‘oh my gosh, she is fabulous!’ …and one that really inspired me was Bobo Lewis—just her Joie de Vivre…for life, and performing, and being a New Yorker. We would all go out every Thursday night after the show and just huddle around her like a campfire and listen to her stories about New York and the theater. I loved her so much. She inspired me.

MS: Someone who was in a show with you once told me that you would loan movies out of dressing room like a Blockbuster. Is that true?

BL: Oh, yes! If it’s possible, I like to make my dressing room like a Green Room. At Bandstand my dressing room was the like community room (because we didn’t have any); I always hand out drinks and snacks. In Bandstand I wasn’t on stage that much so it was a great opportunity for people to hang out and talk. But, yes, when I was in 42nd street I had movies. People would come in, borrow movies, and chill in my dressing room. When you do a show with people they become your family, so you may as well make it like…a family.

MS: You once said a dream role of yours would be to play Mama Rose in Gypsy, and this past summer you got to at The Muny. Anything you’d care to share about that?

BL: Yes, it was a privilege. It was easier than I thought it was going to be because it is so well written. All you have to do is go in prepared with your lines and just be available to it. I just really enjoyed starting to explore that character. I’d love to do it again. It was so satisfying. Even with 11,000 people it was still intimate storytelling. It is such a beautiful role.

MS: I saw it on closing night. I got so many messages from friends who knew I was going all saying, “She is the best Mama Rose, you will ever see.” And you were.

MS: Also you did Dolly…

BL: Yeah, I tend to only do little roles at The Muny: Gypsy, Hello, Dolly!…

MS: How was that role?

BL: Dolly? It was awesome. One of the best stories about Dolly was a night it rained. Right as I’m coming down the stairs at the start of Act Two, it started to POUR. But me and those waiters were going to finish that number no matter what–and we did. In the pouring rain. The audience had umbrellas, the orchestra, half put up umbrellas over their instruments so they could kind of finish it. I could see them in the wings saying, “It’s up to you, do you feel safe?”, but we did the whole number drenched. The audience was screaming. And then we had to call the show. But that’s one of my best theater moments in memory. Winning the Tony award and that night finishing the number in the rain. Unbelievable.

BL: They were awful. I don’t think they ever survived.

MS: Moments like that are exactly what’s so great about live theater. 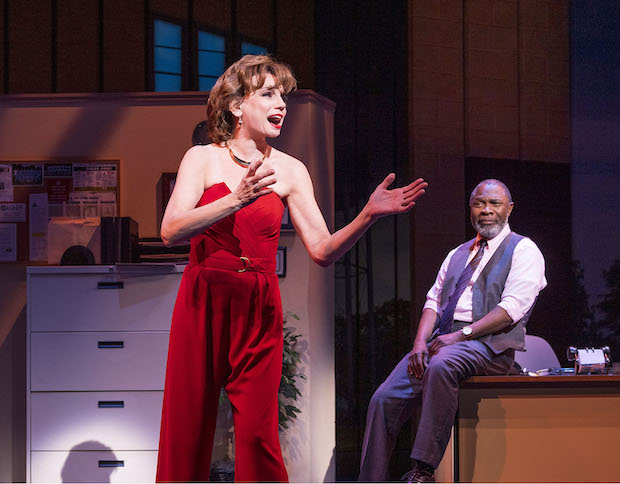 MS: Casey Nicholaw, who directed you in The Prom and The Drowsy Chaperone, also directed Something Rotten. I heard you were initially going to be involved with it, right?

BL: In Rotten? I did a lab, a couple of readings, just to help develop a character, but then it didn’t work out. And then The Prom came along.

MS: Was it for a character that ended up being in the show?

BL: It was a compilation but mostly it was Bea…I kind of helped give birth to that. I’ll do anything Casey asks me to do. I’ll be his muse on anything. I’d be glad to have any little part because I think he’s so smart and I just like being in the room with him. I like being “in the room where it happened” with him no matter what the project is. It’s a joyous room to be in and great place to come to work.

MS: Is there any one person in the cast of The Prom you are particularly most close with?

BL: Well, we like to call ourselves “The Olds”, the four of us, (because everyone else is, like, a teenager)—so it’s me, Brooks, Chris and Angie. But Brooks and I are cut from the same cloth. I’m pretty sure we’re turning into the same person—which is fine with me.

MS: It’s seems like a very special bunch. Similarly to Drowsy, it is such a wonderful ensemble piece that showcases everyone’s talents in a great way.

BL: Everyone has something to contribute and is important in establishing the story, the comedy, the dance; we’re all asked to be triple threats in this show…and it pays off.

MS: It is so great to have something new and completely original, like The Prom, in a time when most other shows are based on a movie or a particular song cannon–but is there a movie you just love and wouldn’t mind seeing turned into a musical?

BL: Oh, I was just talking about this. Shoot! What’s the one with Meryl Streep and Anne Hathaway?

BL: YeeEEesss! Wouldn’t that be a great one?

MS: Isn’t that coming? I thought it was.

MS: Doing 8 shows a week I imagine it’s difficult to catch other shows, but what was the last show you got to see?

BL: Hmm…look, I’m having to think. The last show I saw was Torch Song. It was unbelievable. I was so glad I was able to see it when I did, because obviously I can’t now.

BL: Take her to Prom!

MS: I did, I did. She loved it. She bought the mug. But at Torch Song we happened to sit next to Harvey Fierstein. She leans over to me and whispers, “I think I’m sitting next to Harvey Weinstein.”

BL: That is not Harvey Weinstein.

BL: It so well-balanced and well-crafted. Each scene builds up to the celebration at end–so there’s not one thing that I love more than anything else. Well, I love singing “It’s Not About Me’, but I also love the simple moments. Like last night, right at the end of the show, when Brooks and I are downstage-right, and I look at him and go, “So this is what not failing feels like?”—and that moment is so special. The whole show for Dee Dee comes to that one moment of clarity, where she finds her humanity and joy—I love that moment every night. The audience is so quiet and leaning in—it’s nice just to sit in that and feel the connection to your scene partner and audience both.

BL: It’s hard right now because all I can think about is Prom. So right now, until tomorrow, it is The Prom. But Drowsy is a very close second. There’s nothing like originating a role. You have your DNA all over it. I loved Mama Rose, but Prom is something I gave birth to, so I have ownership to that in a different way than, say, Mama Rose in Gypsy.

MS: You’ve also played Donna in Mamma Mia and The Witch in Into the Woods. Are there any other iconic roles like that you’d love to try?

BL: I think I’d like to try Mrs. Lovett in Sweeney Todd and whatever else Bob Martin writes or Casey directs.

MS: And finally, I have to ask, what’s your favorite Disney movie?

BL: Oh, gosh–I love Disney. Do you mean animated? Or any of them?

BL: I think, Beauty & the Beast. I love that score. Oh, wait—I’m sorry, it’s actually Mary Poppins! I haven’t seen the new one yet, but I remember coming home from Mary Poppins walking up and down my street in North Carolina with an umbrella trying to figure out how I could fly.