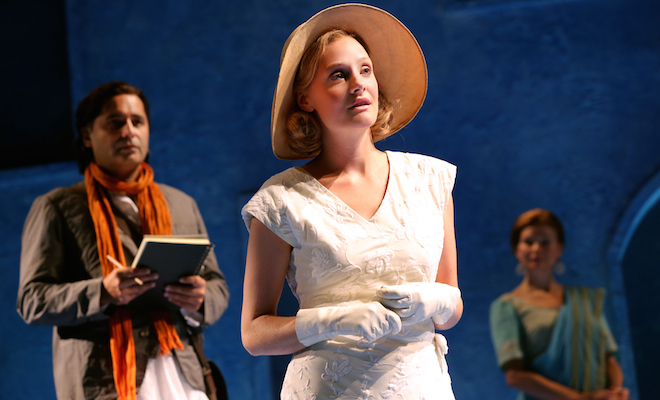 Indian Ink officially opens today, Tuesday, September 30 at the Laura Pels Theatre in the Harold and Miriam Steinberg Center for Theatre (111 46th Street).  This is a limited engagement through November 30, 2014.

Set on two different continents and in two different eras, Indian Ink follows free-spirited English poet Flora Crewe (Romola Garai) on her travels through India in the 1930s, where her intricate relationship with an Indian artist unfurls against the backdrop of a country seeking its independence. Fifty years later, in 1980s England, her younger sister Eleanor (Rosemary Harris) tries to preserve the legacy of Flora’s controversial career. Little by little, Flora’s mysterious past is revealed, as is the surprising story of two people whose connection lives on through art.  An evocative portrait of love and loss, Indian Ink movingly explores how the creative spirit can bring us together in the most unexpected ways.

The Harold and Miriam Steinberg Center for Theatre opened in March 2004 with an acclaimed premiere of Lynn Nottage’s Intimate Apparel starring Viola Davis, directed by Dan Sullivan.  In the ten years since that landmark production, the center has expanded beyond the Laura Pels Theatre to include the Black Box Theatre and now a new education center.  The Steinberg Center continues to reflect Roundabout’s commitment to produce new works by established and emerging writers as well as revivals of classic plays. This state-of-the-art off-Broadway theatre and education complex is made possible by a major gift from The Harold and Mimi Steinberg Charitable Trust. The Trust was created in 1986 by Harold Steinberg to promote and advance American Theatre as a vital part of our culture by supporting playwrights, encouraging the development and production of new work, and providing financial assistance to not-for-profit theatre companies across the country. Since its inception, the Trust has awarded over $70 million to more than 125 theatre organizations.

Roundabout Theatre Company is committed to producing the highest quality theatre with the finest artists, sharing stories that endure, and providing accessibility to all audiences.  A not-for-profit company, Roundabout fulfills its mission each season through the production of classic plays and musicals; development and production of new works by established and emerging writers; educational initiatives that enrich the lives of children and adults; and a subscription model and audience outreach programs that cultivate and engage all audiences.

Roundabout Theatre Company presents a variety of plays, musicals, and new works on its five stages.  Off-Broadway, the Harold and Miriam Steinberg Center for Theatre, which houses the Laura Pels Theatre and Black Box Theatre, with its simple sophisticated design, is perfectly suited to showcasing new plays. The grandeur of its Broadway home on 42nd Street, American Airlines Theatre, sets the ideal stage for the classics.  Roundabout’s Studio 54 provides an exciting and intimate Broadway venue for its musical and special event productions.  The Stephen Sondheim Theatre offers a state of the art LEED certified Broadway theatre in which to stage major large-scale musical revivals. Together these distinctive homes serve to enhance Roundabout’s work on each of its stages.

The 2014-2015 Roundabout Underground production will be Little Children Dream of God, a new play by Jeff Augustin, directed by Giovanna Sardelli.