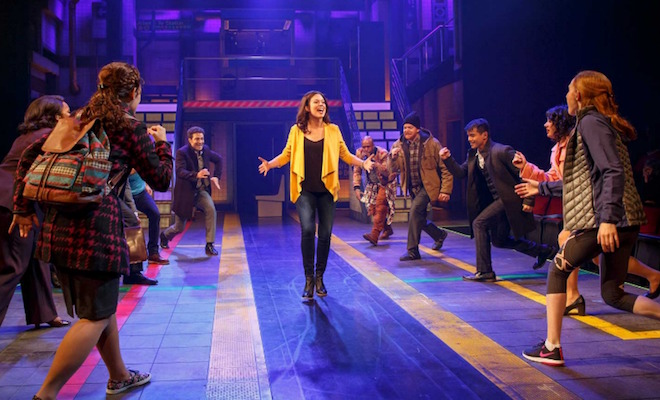 IN TRANSIT TO PLAY FINAL PERFORMANCE
SUNDAY, APRIL 16
AT BROADWAY’S CIRCLE IN THE SQUARE THEATRE

THE ORIGINAL BROADWAY CAST ALBUM WILL BE RELEASED BY HOLLYWOOD RECORDS
DIGITALLY ON FRIDAY, APRIL 28 AND IN-STORES FRIDAY, JUNE 9

“SHOWSTOPPING AND HEART-PUMPING. If Love Actually were a musical set in New York City, it would be IN TRANSIT.” – Entertainment Weekly

“CHARMING, FUN and CLEVER. The perfect show to see when the weather and your tiny apartment have got you down.” – WNYC

“BRAVE AND INNOVATIVE. An honest and beautifully sung testament to New York, and the surging, searching, and imperfect humanity within it.” – The Daily Beast

“GO AHEAD AND SWIPE YOUR METROCARD.” – NBC

(New York, NY) – Broadway’s first a cappella musical IN TRANSIT will play its final performance on Sunday, April 16, 2017 after playing 36 preview and 145 regular performances at Circle in the Square Theatre (235 West 50th Street).

With a book, music and lyrics by Academy Award winner Kristen Anderson-Lopez (Frozen), James-Allen Ford, Russ Kaplan and Sara Wordsworth, and direction and choreography by three-time Tony Award winner Kathleen Marshall (Anything Goes, Nice Work If You Can Get It), IN TRANSIT began performances on November 10, 2016 and officially opened on December 11, 2016.

Producer Janet B. Rosen said, “As the producer of IN TRANSIT, I have had the honor and privilege of working with the brilliant, gifted and talented team of writers, actors and creatives who have brought IN TRANSIT to life every performance for the past five months. I thank them with all my heart, as well as the audiences who have shared the experience with them and with me. We look forward to the release of our cast album which will preserve our show forever.”

The Original Broadway Cast Recording for IN TRANSIT will be released on Hollywood Records and will be available digitally on Friday, April 28, 2017 and in-stores on Friday, June 9, 2017. The original cast album is now available for preorder at Amazon

IN TRANSIT, a funny and poignant new Broadway musical, follows the intertwined lives of 11 New Yorkers faced with the challenges of city life. With a groundbreaking a cappella score by a team including the creators of Pitch Perfect and Frozen, IN TRANSIT takes you on a journey with people hoping to catch the express train to their dreams—including the stops they make along the way. Modern yet timeless, IN TRANSIT is a story about all of us, set to music that will stay with you long after the ride is over.

IN TRANSIT is produced by Janet B. Rosen for Six Train Productions.

TICKETS & PERFORMANCE SCHEDULE
Tickets for IN TRANSIT range from $89 – $159 and are available, along with the full performance schedule at www.telecharge.com (212.239.6200), or in-person at the Circle in the Square Theatre box office (235 West 50th Street).