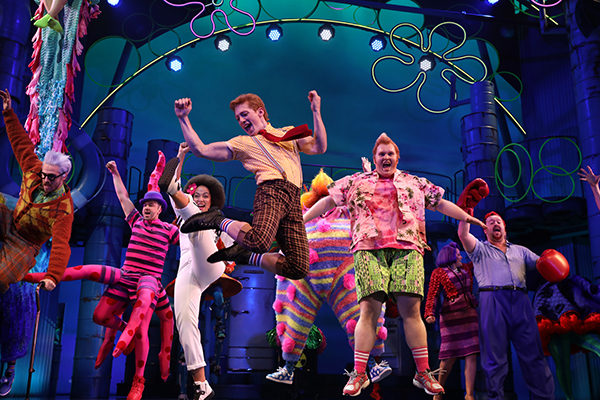 I Am Part of the Resistance Inside SpongeBob SquarePants

StageLight is taking the rare step of publishing an anonymous Op-Ed essay. We have done so at the request of the author, a person in a senior position within SpongeBob SquarePants whose identity is known to us and whose job would be jeopardized by its disclosure. We believe publishing this essay anonymously is the only way to deliver and important perspective to our readers. We invite you to submit a question about the essay or our vetting process here.

SpongeBob SquarePants is facing a test to its existence unlike any faced by a modern American musical: it is closing on September 16th, 2018. (1)

It’s not just that the closing date looms closer and closer. It’s that the joy brought to millions upon millions (2) of Americans by way of this tuneful romp will have to end.

Sure, there’ll be a national tour, followed by regional productions followed by the 100% chance of a revival within the next ten years (3), but will they all star Ethan Slater and his unparalleled chortle? His complete and utter devotion to the role? I mean, rumor has it he’s signed a contract to appear as SpongeBob for the rest of his life whenever the show is revived (4), but there are ways of having those clauses removed.

Rest assured, America, there are those of us in the cast and creative team that are working diligently from within to stymie this unfortunate idea of “closing”. I would know. I’m one of them.

To be clear, ours is not the popular “resistance” of the Broadway snobs. We think musical adaptations of cartoons absolutely have their place among Tony-winning snooze-fests like The Band’s Visit and Dear Evan Hansen (5). We believe closing SpongeBob SquarePants is detrimental to the health of musical theater.

That is why many of us have vowed to do what we can to thwart this unfortunate development.

Why, just the other day, cast members removing personal items from their dressing rooms. Without hesitation, I snatched them out of their hands and returned them to their rightful places.

“You’re not the hero Broadway deserves, but you’re the hero Broadway needs,” Wesley Taylor (Sheldon Plankton) said to me. “Let’s hang out and be best friends from now on! You’re so much more talented than I could ever be!” (6)

I even snuck into the producer’s office and ordered 100,000 more Playbills for the show (7). Susan Vargo will be so thankful. We won’t be caught with our SquarePants down when the show extends.

Also, since John Legend has been a friend of mine for over 50 years, I convinced him to write a bunch of new songs for the show (8). So even if you’ve already seen this hysterical night of amazingness, you’ll have plenty of reason to come back.

It may be cold-comfort in this chaotic era, but Americans should know that there are artists in the room. We fully recognize what is happening. And we are trying to do what’s right even when Broadway won’t. The biggest concern is not what the closing of SpongeBob SquarePants has done to Broadway, but rather what we as a nation have allowed Broadway to do. We have sunk low and allowed the Great White Way to be stripped of this masterpiece.