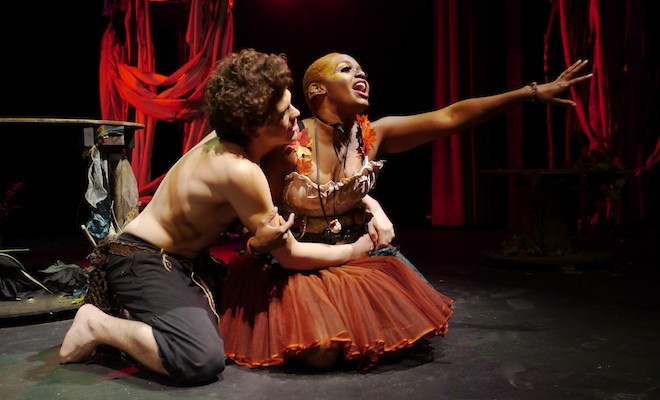 “HUMAN” AT THE NYC FRINGE FESTIVAL

Did you ever wonder what befell of the fairies in A Midsummer Night’s Dream while we were watching those pesky humans fall in and out of love? If so, Human (running through August 23 at Teatro LATEA at The Clemente) is the show for you. It takes the character of the “changeling boy”from Midsummer(heard of, but never seen), who sparks an argument between Titania (queen of the fairies) and Oberon (their king), and makes him the central character of this drama. As he struggles to decide which world (human or fairy) he belongs in, the characters around him weave their own webs of emotion.

Human was written and directed by Alaska Reece Vance. It is presented by The Drifting Theatre, which describes itself as an “artist collective based in the Appalachian Mountains of Northeast TN.”Because it is a collective, the cast also doubled as designers of the production. While this seems like a good idea, it made the execution of several elements rather flawed. I would have preferred there had been separate designers so that there could have been more of a unified design theme.

The lighting was a little off at times, with actors delivering important lines while in complete darkness. The costumes were designed in a “mock goth”style that was meant to be whimsical but instead looked like they were designed for a knock-off “Game of Thrones”LARPing tournament. The sound design, while well thought out, wasn’t well executed, as some offstage lines modified by effects were not understandable.

As for the play itself, it was about an hour too long. I don’t know many audiences that would be able to sit through 110 minutes without an intermission. The pacing of the dialogue was slow at times, and for the most part did not compare favorably to its Shakespearean source material. The script has potential, but there need to be some major cuts.

Many of the performances in the play were serviceable. However, there was one true standout: RaChelle Cheeks playing the dual role of Fennel and Sycorax. She was a wonderful actress who managed to make both of these characters three dimensional, despite the questionable material she was given. She has natural comedic ability and commanded all of the scenes she was in. The rest of the cast did fairly well, but none compared to Ms. Cheeks.

If you’re looking for a riff on a Shakespearean classic, check out Human before it, like the fairies, vanishes out of sight.

← Previous Story GREAT MEN, GREAT WOMEN: THE PAWNBROKER AT THE FRINGE
Next Story → “Skin in the Game”