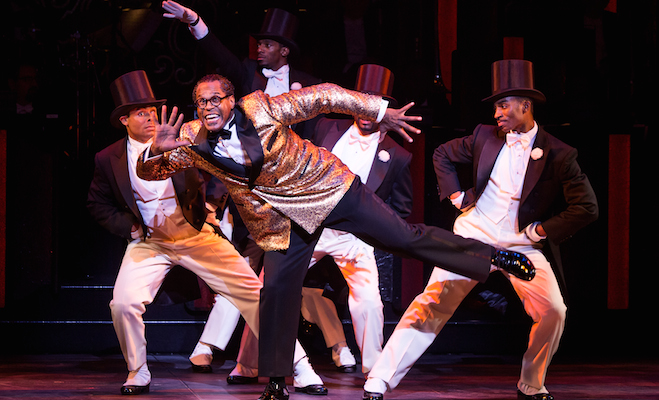 How Do Dancers Recreate the Cotton Club?

Inside the lives of two After Midnight stars

Welcome to Building Character, TDF Stages ongoing look at actors and how they create their roles

Since previews began last October, Dormeshia Sumbry-Edwards has danced and sung her way through almost 250 performances of After Midnight, the Jazz Age revue at Broadway’s Brooks Atkinson Theatre that celebrates the legendary Cotton Club. Whether she’s tap dancing on a set of rotating stairs or belting the apartment-life blues in “Raisin’ the Rent,” she’s channeling the essence of the iconic Harlem nightspot. But it takes serious work to conjure that spirit. For one thing, Sumbry-Edwards isn’t often asked to deliver the same show eight times a week. “In my line of work, a lot is improvised,” she says. “When I go tap dance [at] places, I very rarely have a set routine. I sometimes don’t even go in for a sound check. ‘I don’t want to see the band. I don’t even want to know what kind of band it is. Let me just go and feel it out.’ But this is not that kind of party.”

Instead, After Midnight, whose seven Tony nominations include a nod for Best Musical, is a consciously sculpted tribute. The setlist zips from classic songs (“Stormy Weather,” “On the Sunny Side of the Street”) to splashy dance numbers to spoken excerpts of Langston Hughes poems, and the onstage band (better known as the Jazz at Lincoln Center All-Stars) serves every riff like polished pros.

That’s not to say the show feels stodgy—quite the opposite, in fact—but it does feel precise. It’s clear we’re watching a crafted event, not a free-form improvisation.

“But it’s wonderful to be able to work this way, too,” Sumbry-Edwards says. “We’ve settled into the characters and the storytelling, and of course the camaraderie that we have with each other is growing.”

Desmond Richardson echoes that idea. Another of the show’s featured dancers, he solos during a seductive ballet set to Duke Ellingston’s “The Mooche,” and when the band performs a ditty called “Peckin’,” he’s part of a fully synchronized quintet. It’s hypnotic to watch the five men move in unison with each other and also in time with the music, and it’s no wonder Richardson’s connection with his fellow performers has grown so intense. “It’s so spontaneous and so real,” he says. “We tend to listen to the band, and they listen to us. It doesn’t matter how tired you are. When they’re up there with you, you can find the energy you need.”

Of course, the performers still have individual moments to focus on. Sumbry-Edwards, for instance, has to make sure her character in “Raisin’ the Rent” seems believably irritated by her landlord. To prepare, she says, “I give myself the pep talk that I gave myself on my final audition, which was ‘She’s frustrated.’ And that’s keeping it clean!”

She continues, “So yes, it’s eight shows a week, but you know what? She’s frustrated. So take a deep breath and make sure that’s clear.”

Meanwhile, to capture the slightly menacing sensuality in “The Mooche,” which finds him slinking around with two female dancers, Richardson draws on other art forms. “For me, it almost brings to mind one of those old moments of film,” he says. “That’s what I’m really thinking about when I’m coming in, that I’m being filmed and that it’s very cinematic.”

However, even though they are two of the seven After Midnight cast members nominated for this year’s Astaire Awards, which honor excellence in dance and choreography, both Richardson and Sumbry-Edwards stress that the larger group of artists is what makes the show work.

It’s telling, for instance, that during the closing number, no one in the cast is featured more prominently than anyone else. The ensemble includes a rotating “special guest star” who sings several songs—Fantasia Barrino is on the bill until June 8—but during the finale, the celebrity performer is just part of the on-stage crowd.