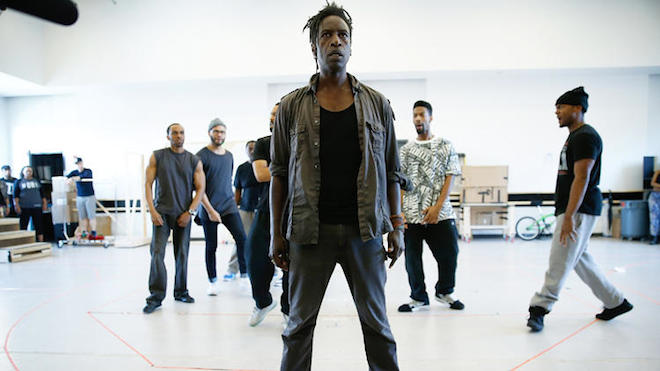 “HOLLER IF YA HEAR ME” TO CLOSE

BROADWAY’S HOLLER IF YA HEAR ME TO CLOSE ON SUNDAY, JULY 20

Here’s what the critics have said about HOLLER IF YA HEAR ME:

“HOLLER IF YA HEAR ME is the most exciting new musical to hit Broadway in years!”
-Sandy Kenyon, WABC-TV

“HOLLER IF YA HEAR ME is a bold effort to open up Broadway to a new musical idiom, without diluting it or reducing it to a cartoon. The show hollers, and you simply have to listen.”

“There isn’t a single rapper more suited for the concept than Tupac Shakur, the most emotionally rich, psychologically complex, lyrically candid figure hip-hop has seen its 40-year history. Watching this crew of gifted performers rap, sing and speak his words draws new focus to his cinematic eye.  Agitprop rapper Saul Williams, in the lead role of John, raps with the authority that 19 years of hip-hop and poetry experience can bring and Tonya Pinkins sings with the gusto of a Tony winner.”

“In a culture that frequently dehumanizes black people of all ages and ignores the voices of young people of all ethnicities, HOLLER IF YA HEAR ME represents an exciting and important moment in contemporary popular culture, a moment when Black men’s voices, humanity, and deep existential longing for peace of all kinds literally take center stage and hold it.”

“HOLLER IF YA HEAR ME is an innovative, artistic masterpiece that combines the monumental, prolific and provocative lyrics of Tupac with an original story so heartfelt and honest that the audience has no other choice but to fall in unconditional love with this show.”

Speaking on behalf of the producers, Eric L. Gold said “We are so proud to be a part of this ground breaking production. The cast, musicians, production and creative teams gave more than just their professional excellence but contributed their passion as well. My hope is that a production of this calibre, powerful in its story telling, filled with great performances and exciting contemporary dance and music will eventually receive the recognition it deserves. It saddens me that due to the financial burdens of Broadway, I was unable to sustain this production longer in order to give it time to bloom on Broadway. Tupac’s urgent socially important insights and the audiences’ nightly rousing standing ovations deserve to be experienced by the world.”

HOLLER IF YA HEAR ME, the world inside Tupac Shakur’s music and lyrics, blazes to life in a non-biographical story about friendship, family, revenge, change and hope. Inner city lives struggle for peace against the daily challenges they face in this entertaining and original musical. Through the poetry of one of the 20th century’s most influential and culturally prominent voices, we are given a window into realities of the streets still relevant today.  The musical features over 20 songs including “Holler If Ya Hear Me,” “California Love,” “I Get Around,” “Thugz Mansion,” “Keep Ya Head Up,” “Dear Mama,” “Me Against the World,” “Unconditional Love” and “Hail Mary.”

Joining director Kenny Leon (A Raisin in the Sun [2004 and Tony Award in 2014], Fences [2010], The Mountaintop) and author Todd Kreidler (Guess Who’s Coming to Dinner and direction of How I Learned What I Learned) on the creative team, are Tony Award winning choreographer Wayne Cilento (Wicked, The Who’s Tommy, How to Succeed…[1995], AIDA, Sweet Charity [2004]), and musical supervisor Daryl Waters (Bring in ‘Da Noise, Bring In ‘Da Funk, The Color Purple, Memphis).

HOLLER IF YA HEAR ME offers a Hip-Hop exhibition curated by The National Museum of Hip-Hop (NMoH) at the Palace Theater.  The exhibition invites patrons to learn about the history of Hip-Hop through one-of-a-kind artifacts and memorabilia, interact with “Dreams Walls” by inscribing it with their dreams, and view a dynamic mural featuring the 4 Elements of Hip-Hop: DJing, Emceeing. B-Boying and Graffiti.  HOLLER IF YA HEAR MEticketholders can view the exhibition at no additional cost one hour prior to each performance.  The exhibition will continue throughout the run of the production.

Tickets are on sale through Ticketmaster at www.Ticketmaster.com, by calling 877-250-2929 or in person at the Palace Theatre box office, 1564 Broadway at 47th Street.  Ticket prices range from $39 to $139 (all prices include a $2.00 facility fee).  A limited number of student tickets at $30 are available through TIX4STUDENTS at www.tix4students.com.  TIX4STUDENTS is an annual membership program for students 18+ only that provides access to purchase student tickets online in advance (validation of student status required). HOLLER IF YA HEAR ME is participating in this program as part of their commitment to being accessible to college students.