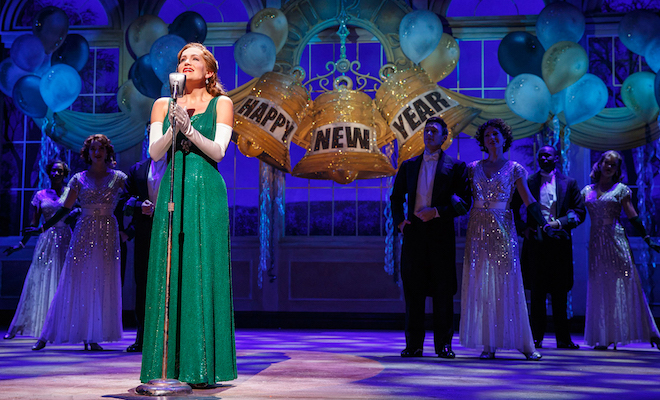 BroadwayHD subscribers can tune in to the live stream on January 14 at 8 p.m. ET

Just one year out from launch, BroadwayHD has made strides to promote, preserve and extend the reach of live theater to audiences across the country. The response from theater fans nationwide after history was made with the first-ever Broadway live stream of Roundabout Theatre Company’s “She Loves Me” in June was overwhelming, indicating that fans are ready to embrace the stage-to-screen movement. BroadwayHD is excited to now preserve this amazing production of “Holiday Inn” to ensure this limited engagement lives on.

“Roundabout Theatre Company has been a great partner since the live stream of ‘She Loves Me’ and we are thrilled for the opportunity to work with them again,” said BroadwayHD co-founders Stewart F. Lane and Bonnie Comley. “‘Holiday Inn’ is an incredibly special show that deserves to live on, particularly because of the iconic Irving Berlin score and captivating choreography performed by a stellar cast. Roundabout Theatre Company has once again put on a visually stunning production and we are honored to be able to share the magic with a larger audience.”

“In the few months since we began, over 3,000 students and teachers have been given the opportunity to see and hear the magic of Irving Berlin performed by a cast of the most talented actors on Broadway at free or reduced rates. Additionally, nearly 20,000 Roundabout audience members and subscribers enjoyed this gem of a show for prices only a non-profit can offer, sometimes as low as $10. It’s imperative to Roundabout that our shows remain accessible to everyone. So we are overjoyed now to bring the best of Broadway to audiences who otherwise wouldn’t be in NYC to see us live,” notes Todd Haimes, Roundabout Theatre Company’s Artistic Director/CEO.

This strictly limited run of “Holiday Inn” is the final production of Roundabout’s celebrated 50th Anniversary Season and plays through January 15, 2017 only, at Studio 54. It’s directed by Gordon Greenberg and choreographed by Denis Jones. With music and lyrics by Irving Berlin, the new book by Gordon Greenberg and Chad Hodge is inspired by the Academy Award-winning film “Holiday Inn.” This performance of “Holiday Inn” will be produced in association with THIRTEEN Productions LLC and Universal Stage Productions, and directed for the screen by David Horn.

“Holiday Inn” tells the story of Jim, who leaves the bright lights of show business behind to settle down on his farmhouse in Connecticut … but life just isn’t the same without a bit of song and dance. Jim’s luck takes a spectacular turn when he meets Linda, a spirited schoolteacher with talent to spare. Together they turn the farmhouse into a fabulous inn with sensational performances to celebrate each holiday, from Thanksgiving to the Fourth of July. But when Jim’s best friend, Ted, tries to lure Linda away to be his new dance partner in Hollywood, will Jim be able to salvage his latest chance at love?

Major support for “Holiday Inn” is provided by The Blanche and Irving Laurie Foundation. “Holiday Inn” benefits from Roundabout’s Musical Theatre Fund with lead gifts from The Howard Gilman Foundation and Perry and Marty Granoff.

“Holiday Inn” was originally developed at The Goodspeed Opera House, one of the country’s most respected non-profit institutions.

About BroadwayHD
Since its launch in 2015, BroadwayHD.com aims to extend the reach of Broadway to fans old and new, anytime and anywhere. BroadwayHD is the only online streaming service of its kind, offering viewers an unprecedented Broadway experience and access to exclusive live streams. In June of 2016, BroadwayHD made history with Roundabout Theatre Company’s “She Loves Me,” marking the first-ever live stream of a Broadway show. In addition to exclusive live-streamed content, BroadwayHD offers subscribers unlimited access to an on-demand library of over 160 theater productions from the comfort and convenience of their homes—or wherever streaming is possible. It’s the Broadway you know and love, curated from the stage to your screen.

About Roundabout Theatre Company
Roundabout Theatre Company is committed to producing the highest-quality theatre with the finest artists, sharing stories that endure, and providing accessibility to all audiences. A not-for-profit company, Roundabout fulfills its mission each season through the production of classic plays and musicals; development and production of new works by established and emerging writers; educational initiatives that enrich the lives of children and adults; and a subscription model and audience outreach programs that cultivate and engage all audiences.

Roundabout Theatre Company presents a variety of plays, musicals, and new works on its five stages. Off-Broadway, the Harold and Miriam Steinberg Center for Theatre, which houses the Laura Pels Theatre and Black Box Theatre, with its simple sophisticated design, is perfectly suited to showcasing new plays. The grandeur of its Broadway home on 42nd Street, American Airlines Theatre, sets the ideal stage for the classics. Roundabout’s Studio 54 provides an exciting and intimate Broadway venue for its musical and special event productions. The Stephen Sondheim Theatre offers a state of the art, LEED-certified Broadway theatre in which to stage major large-scale musical revivals. Together these distinctive homes serve to enhance Roundabout’s work on each of its stages.

About Universal Stage Productions
Universal Stage Productions is the live theatre division of the world-famous motion picture studio. Universal’s record-breaking musical phenomenon “Wicked” is currently celebrating fourteen hit years on Broadway. With a national tour and multiple international productions, “Wicked” has been seen by nearly 50 million people worldwide, making it one of the most successful theatrical ventures of all time. In 2008, Universal’s critically acclaimed musical adaptation of “Billy Elliot” opened on Broadway and went on to win ten Tony® Awards including Best Musical. Universal also produced the Tony®-nominated Broadway production of “Bring It On: The Musical,” the acclaimed revival of “The Gershwins’ Porgy and Bess,” and is actively involved in the development of new work with many of the nation’s leading non-profit theatres.