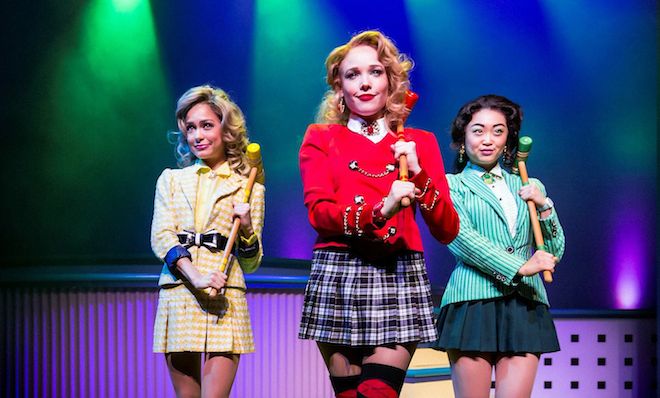 “We are extremely grateful for the enthusiastic audiences and dedicated Heathers fans who have cheered on these extraordinary artists in what has been a dream come true for the entire team,” said director Andy Fickman. “These next few weeks will be a celebration of this remarkable achievement, with all of the talented people who came together to make Heathers a one-of-a-kind theater experience. And although its Off-Broadway stage is coming to an end, we are so thrilled to have established our brand with this solid New York run, opening many doors for the future of this piece, which we look forward to announcing very soon.”

The critically-acclaimed production, declared a “rowdy guilty pleasure” by Ben Brantley of The New York Times and described by The New York Post as “ingenious, naughty and very funny,” received two 2014 Drama Desk Nominations (Outstanding Leading Actress in a Musical; Outstanding Music), two Lucille Lortel Award nominations (Outstanding Lead Actress in a Musical; Outstanding Choreography) and a Best New Musical nomination from the Off-Broadway Alliance Awards. The world premiere cast recording of HEATHERS: THE MUSICAL was released on June 17, 2014, and debuted as the #1 theatre soundtrack on the iTunes chart, and #5 on the Billboard Cast Album chart. The musical, set in the late 80’s, has celebrated a vocal and extremely active fan base who call themselves the ‘Corn Nuts’ and – when not flocking to New World Stages night after night in full costume – have been instrumental ambassadors for the show, which has gained an unprecedented social media following in its five-month Off-Broadway run, with over 22,000 fans on Facebook and 10,500 followers on Twitter.

September, 1989. Westerberg High is terrorized by a shoulder-padded, scrunchie-wearing junta:  Heather, Heather and Heather, the hottest and cruelest girls in all of Ohio.  But misfit Veronica Sawyer rejects their evil regime for a new boyfriend, the dark sexy stranger J.D., who plans to put the Heathers in their place – six feet under.  The feature film Heathers was released on March 31, 1989 and helped launch the careers of actors Winona Ryder (Veronica), Christian Slater (J.D.) and Shannen Doherty (Heather Duke).   The film became a cult favorite, spawning memorable phrases such as “What’s your damage?”, “It’ll be very,” and “Greetings and Salutations” that have since enriched the pop culture lexicon.  In 2006, Heathers was included in the top five of Entertainment Weekly’s list of the “Greatest High School Movies of All Time”.