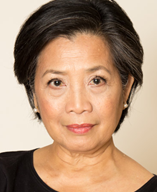 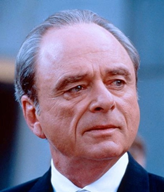 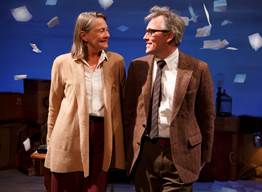 (New York, NY) Women’s Project Theater, under the leadership of Producing Artistic Director Lisa McNulty and Managing Director Maureen Moynihan, announced today that Drama Desk nominee Harris Yulin (Hedda Gabler, Diary of Anne Frank) will return to play Robert Lowell opposite Lortel Award winner Mia Katigbak (Awake and Sing!) as Elizabeth Bishop from November 30 to December 5, 2015 in DEAR ELIZABETH, the inaugural production at the WP’s new theatrical home the McGinn/Cazale Theatre, 2162 Broadway (at 76th Street). Written by two-time Pulitzer Nominee and Tony Nominee Sarah Ruhl (The Oldest Boy, In the Next Room, or the vibrator play) and directed by Kate Whoriskey (Ruined, Sweat), Dear Elizabeth tells a tale of unconventional friendship and intimacy that spanned thirty years and more than 400 letters with postmarks from Maine to Key West, from London to South America.

“Mr. Yulin has a gruff, weathered stage voice that hints at the rough knocks of Lowell’s life — self-induced although many of them were. The only real conflict in their long friendship arrives when Lowell publishes a long poem, “The Dolphin,” that includes letters from Hardwick that he has taken the liberty of editing. Mr. Yulin deftly combines the poet’s fierce defense of his work with a sense of contrition and sensitivity to his friend’s criticism.” NEW YORK TIMES (October 31, 2015)

HARRIS YULIN (Robert) has appeared on Broadway in Hedda Gabler, The Price, The Diary of Anne Frank, The Visit, A Lesson From Aloes, and Watch On The Rhine. His off-Broadway credits include Raindance at Signature Theatre; Don Juan In Hell at Symphony Space; Steve Tesich’s Arts And Leisure at Playwrights Horizons; Tina Howe’s Approaching Zanzibar at Second Stage; Hamlet, King John, Richard III, and A Midsummer Night’s Dream at New York Shakespeare Festival; and Mrs. Warren’s Profession and Hedda Gabler at Roundabout. Regional credits include Finishing the Picture at Goodman Theatre; a recent appearance in the title role of King Lear at New Jersey Shakespeare Festival; The Talking Cure at Mark Taper Forum; Tartuffe at the Guthrie and Arena Stage; Henry V at Hartford Stage; and The Tempest at Shakespeare & Co. Mr. Yulin’s directing credits include Horton Foote’s The Prisoner’s Song at Ensemble Studio Theatre; Conor McPherson’s This Lime Tree Bower at Primary Stages; Don Juan In Hell in London (Riverside Studios) and in New York (Symphony Space), Steve Tesich’s Baba Goya (Second Stage), Adele Shank’s Winter Play at Second Stage; Candida at the Shaw Festival; and The Front Page and The Guardsman at Long Wharf. His television credits include “Muhammad Ali’s Greatest Fight,” “Mister Sterling,” “24,” “Buffy The Vampire Slayer,” “Frasier” (Emmy Nomination), and “La Femme Nikita” (Emmy Nomination). His film credits include Fur, The Place Beyond the Pines, The Emperor’s Club, Training Day, The Million Dollar Hotel, The Hurricane, Looking for Richard, Murder at 1600, Multiplicity, Clear and Present Danger, and Scarface.

WOMEN’S PROJECT THEATER (WP) is the nation’s oldest and largest theater company dedicated to developing, producing and promoting the work of female theater artists at every stage in their careers. WP Theater supports female-identified theater artists and the world-class, groundbreaking work they create, and provides a platform where their voices can be heard and celebrated on the American stage.

Founded in 1978 by visionary producer, Julia Miles, WP has been the launching pad for many of our nation’s most important theater artists. Eve Ensler, María Irene Fornés, Katori Hall, Pam MacKinnon, Lynn Nottage and Leigh Silverman, among many, many others, all found early artistic homes here. Throughout its 38 year history, WP has produced over 600 main stage productions and developmental projects, and published 11 anthologies of plays. No other producing institution in the country can claim this kind of ongoing history of advocacy and support for women in the theater, and we look ahead to the next generation of artists who will also begin their careers here.

WP Theater accomplishes its mission through several fundamental programs: the WP Lab, a two-year mentorship and new play development program for women playwrights, directors, and producers; the Playwright In Residence commissioning program; the Developmental series; and the Main Stage series, which features a full season of Off-Broadway productions written and directed by extraordinary theater artists.

LISA MCNULTY (Producing Artistic Director). Lisa is in her second season as Producing Artistic Director of Women’s Project Theater. Lisa comes to WP from MTC, where she served as Artistic Line Producer for eight seasons, working on more than 30 productions both on and off Broadway, including plays by Lynn Nottage, Sarah Treem, Harvey Fierstein, and Tarell Alvin McCraney, among many, many others. Lisa has a long history with WP Theater. She was originally hired by the company’s founder, Julia Miles, as the Literary Manager from 1997-2000, where she dramaturged work by María Irene Fornés, Julie Hébert, and Karen Hartman, among others, and in 2004, she returned to WP as its Associate Artistic Director. From 2000-2004 she was McCarter Theater’s Producing Associate, and her independent producing career includes projects with Sarah Ruhl, Todd Almond, and Lucy Thurber.

MAUREEN MOYNIHAN (Managing Director) Maureen started her career in Chicago working for the Steppenwolf Theatre Company and commercial producer Fox Theatricals. Prior to joining WP Theater, Maureen spent over a decade working for Blue Man Productions in several positions including serving as their Executive Director for five North American Productions. Since moving to New York, she has worked for several nonprofit and commercial organizations including Manhattan New Music Project, York Theatre Company and the immersive theatrical experience Queen of the Night.