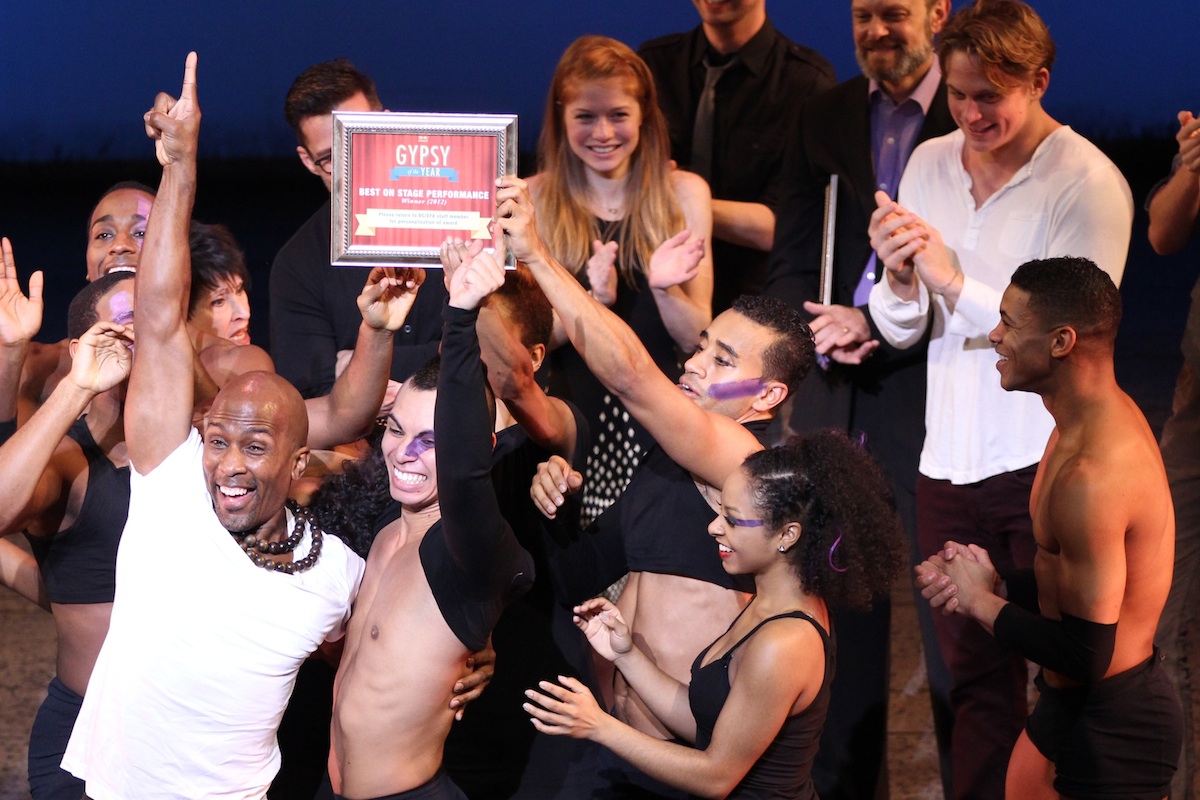 GYPSY OF THE YEAR AWARDS!

The 24th Annual Gypsy of the Year Competition, the culminating celebration of six weeks of fundraising by 51 participating Broadway, Off-Broadway and national touring companies, raised $3,902,608 for Broadway Cares/Equity Fights AIDS.

The grand total was announced Tuesday, December 4, at this year’s Gypsy of the Year, which included songs, original skits and dances performed by more than 200 of New York’s best singers, dancers and musicians.

Check back soon for photos and videos from this year’s show.

Two-time Tony Award winner Chita Rivera joined Katie Holmes and Ricky Martin in announcing the grand total to a standing-room-only audience at the New Amsterdam Theatre, home to Disney’s Mary Poppins. The three presented awards to the top fundraising companies and to the best performances in this year’s show.

This year’s top fundraiser was the national tour of The Book of Mormon, which raised $478,130. Here’s how this year’s fundraising competition total ended:

National Tours
Top Fundraiser The Book of Mormon $478,130
First Runner-Up Wicked – Emerald City $357,379
Second Runner-Up Wicked – Munchkinland $252,152
Third Runner-Up Les Miserables $172,290
The company of The Lion King took honors for the best onstage presentation for a piece, choreographed by Ray Mercer, that transformed a spoken word introduction into a graceful, powerful dance metaphor. The cast of Bring It On: The Musical was runner-up with a high-flying, acrobatic hip-hop number.

The 2012 edition of Gypsy of the Year, which was presented in two shows on December 3 and 4, is the finale of six weeks of intensive fundraising by Broadway, Off-Broadway and national touring companies. The entire theatre community gathers for the competitive variety show, put on by the most talented singers and dancers in the ensemble of shows, known as “gypsies.”

Broadway Cares announced last month that $250,000 of this year’s Gypsy of the Yearfundraising dollars had already been sent to three relief agencies – Community FoodBank of New Jersey, AmeriCares and the American Red Cross – and The Actors Fund to help provide immediate assistance for those in New York, New Jersey and Connecticut affected by the devastation from Hurricane Sandy. On Tuesday, BC/EFA announced that an additional $100,000 has been given to The Actors Fund to help continue providing emergency financial assistance for temporary shelter, food, clothing and transportation for members of our theatrical family.

The 24th Annual Gypsy of the Year Competition featured a tribute to legendary lyricist Fred Ebb, led by Tony Award winners David Hyde Pierce and Debra Monk. Ebb is renowned for his legendary collaborations with composer John Kander. Together, Kander and Ebb created some of the most delightful, smart and hilarious songs in more than a dozen groundbreaking and acclaimed musicals of the last 50 years, including Zorba, Cabaret, Chicago, Kiss of the Spider Woman and The Scottsboro Boys, winning three Tony Awards. Ebb died in 2004. As a stipulation in his will, Ebb created the Fred Ebb Award of $50,000 to be given annually to an aspiring musical theatre songwriter and generously left Broadway Cares/Equity Fights AIDS the remaining portion of royalties earned on his collective works – a donation totaling an astonishing $6.95 million so far. In 2012, the Foundation’s award to BC/EFA was $1.3 million, the largest single gift in Broadway Cares history.

This year’s Gypsy of the Year tribute to Ebb featured Hyde Pierce and Monk reuniting with the cast of Curtains, one of the last Broadway shows created by Kander and Ebb. A host of alumni from Chicago also joined in a stirring finale tribute of “Show People” from Curtains.

The show’s opening number celebrated the history of Broadway dance, spotlighting iconic choreography from West Side Story, Fosse, 42nd Street, The Will Rogers Follies, Crazy for You, Legally Blonde and A Chorus Line. It was directed and choreographed by Rommy Sandhu with music arrangements by Ben Cohn and lyrics by Stacia Fernandez.

This year’s Gypsy of the Year was again hosted by noted Broadway personality Seth Rudetsky (“Seth’s Big Fat Broadway” on Sirius/XM Satellite Radio), who shared his trademark “deconstructions” of over-the-top musical moments. Rudetsky also shared one of his own over-the-top moments: a recording of a 12-year-old Seth performing a unique version of “Tomorrow” from Annie. He was joined by surprise guest stars Andrea McArdle, the original Annie, and Lilla Crawford, who currently stars as Annie in the hit Broadway revival.

The 24th Annual Gypsy of the Year also featured a variety of other appearances that left the sold-out crowd cheering:
• The cast of Chicago saluted the groundbreaking work of that show’s legendary choreographer, Bob Fosse, with two numbers recreated from the 1999 Broadway show Fosse. Grammy Award nominee Billy Ray Cyrus, who’s currently playing Billy Flynn in the Broadway production, started the tribute with an a capella version of “Bye Bye Blackbird” before turning the stage over to his castmates, who delivered a high-energy recreation of Fosse’s legendary choreography of “Sing, Sing, Sing.”
• The singing and non-dancing ensemble members of Disney’s hit Newsies comically lamented their plight, wishing they could “dance like the Newsies,” the high-kicking, acrobatic, attention-getting young newsboys of the show’s title.
• Members from the cast of Broadway’s ill-fated Rebecca, which never opened this season despite several attempts, grieved their almost-run on Broadway in a comical tune that poked fun at the production’s well-publicized missteps.
• With younger cast members from Mamma Mia! texting seriously around him, Brian Scott Johnson and special guest Len Cariou remembered – to the tune of “Yesterday” – the “old days” when people talked to each other backstage rather than constantly updating their status on Facebook or posting on Twitter.

Gypsy of the Year also featured outstanding and often show-stopping performances by the companies of Evita, Mary Poppins, Newsical The Musical, Once and Rock of Ages, as well as a presentation honoring the 17 national tours that joined in this year’s fundraising.

This year’s show was directed by Kristin Newhouse with Jason Trubitt serving as production stage manager.

Gypsy of the Year is sponsored by United Airlines and The New York Times.