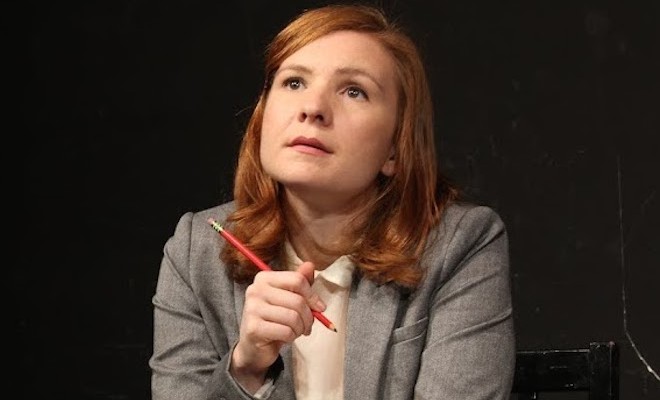 GREAT MEN, GREAT WOMEN: THE PAWNBROKER AT THE FRINGE

The saying goes that “behind every great man there is a great woman.” However, for Herr Bertolt Brecht – the renowned German playwright famous for The Threepenny Opera, Mother Courage and Her Children, and myriad international successes – this is a gross understatement. While scholars and artists universally hail Brecht as the most influential theater practitioner of the 20th Century, up-and-coming playwright Katelin Wilcox credits the impressive array of ladies behind the scenes. The Pawnbroker: Lies, Lovers, and Bertolt Brecht, the New York International Fringe Festival play written and performed by Wilcox, dares to question the greatest figure in modern theater.

Wilcox’s five-character, one-woman piece is an academic examination of Brecht’s career vis-à-vis the important women in his life. While his first wife Marrianne Zoff describes the horrors of his repeated infidelity, his second spouse Helene Weigel laughs at his insecurity and constant need for sexual gratification. Similarly, Brecht’s mistresses and collaborators Elisabeth Hauptmann, Margarete Steffin, and Ruth Berlautell tell tales of his torrid affairs, artistic eccentricities, and ruthless business dealings. Hopping between characters like a thrilling game of Hot Potato, the 70-minute monologue piece contends that Brecht’s true genius may not have been his writing talents; rather, his abilities to network, seduce, and manipulate secured his place in history.

At the center of the story is Brecht the hypocrite. In addition to exposing his extramarital encounters, Wilcox explores the possibility that he plagiarized some of his most famous works. In fact, his assistant and lover Hauptmann may have been responsible for up to 90% of the Threepenny Opera script, despite having received only 12.5% of the profits. Additionally, Weigel scoffs at her communist husband’s deceptively humble wardrobe, calling him “the most expensive, worst-dressed man.”

The production is in capable hands under the direction of Jennifer Curfman, whose knowledge and appreciation of the Brechtianouvre is evident. One of Brecht’s most enduring theoretical contributions to dramatic scholarship is the “alienation effect.” Interested in plays as political platforms, he developed a series of theatrical devices (slide projections, intentionally fake set pieces, frequent academic commentary, et al) aimed to expose the artifice of performance and keep the audience at an objective distance. To this end, Curfman utilizes projected quotes, artificial sound effects, and many of Brecht’s other techniques to show his work in action. The result is an engaging, educational production that is equal parts heartfelt homage and scathing critique.

Wilcox proves equally strong on the page and stage, articulating her intricate text with poise and passion. She shifts between characters subtly but distinctly, using the slightest vocal and physical changes to inhabit Brecht’s five women. However, her real strength is her wit, which shines through in every line.

The Pawnbroker is a fascinating, intellectual examination of the shortcomings of historical narratives, the nature of genius, and the dangers of idolatry. In the tradition of its subject, Wilcox’s piece asks its audience to set aside their preconceptions and maintain an objective eye.