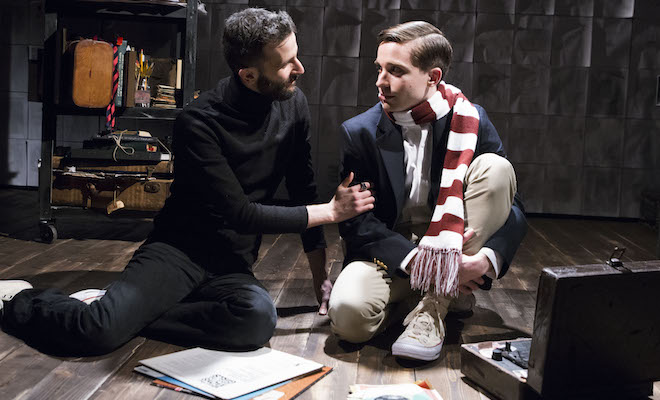 “GOREY: The Secret Lives of Edward Gorey” To Play THE SHEEN CENTER

A NEW PLAY WRITTEN AND DIRECTED BY
TRAVIS RUSS

GOREY is a fantasy memoir chronicling the mysterious life of Edward Gorey, the “artist and writer of genius” (The New Yorker) widely considered to be “the master of high-camp macabre” (The New York Times). In a piercing, funny, and lyrical blend of fact and fantasy, the play cinematically moves forward and backwards through a fifty-year span of Gorey’s life. The wittily enigmatic title role is performed by three different actors – Andrew Dawson (Acts of Love), Phil Gillen (Drunk Shakespeare) and Aidan Sank (Peter and the Starcatcher, Reg.) – who converse with their younger and older selves, revealing Gorey’s dark imagination and personal demons, as well as the heartbreaking loneliness of creative genius.

“Fresh on the heels of our incredibly successful HERE Sublet Series engagement last spring, we’re thrilled to be presenting Gorey at the esteemed Sheen Center,” said Travis Russ. “The breathtaking magic and stunning stagecraft that this cast and creative team bring to the table is remarkable, and we look forward to sharing this wondrous theatrical experience with New York audiences on a larger stage.”

A satirical and eccentric aesthete, Edward Gorey (1925-2000) enraptured readers with his darkly subversive yet delightful pen-and-ink drawings, and cryptic children’s stories tackling mature themes such as death, love, oddity and loss. Gorey published over 100 works, including The Gashlycrumb Tinies, The Doubtful Guest and The Unstrung Harp. A freelance draughtsman for much of his life, he also illustrated works of other literary giants including Samuel Beckett, T.S. Eliot, Charles Dickens, Edward Lear, Lewis Carroll, John Updike, Virginia Woolf and Bram Stoker. Gorey’s designs for the 1977 Broadway production of Dracula starring Frank Langella earned him a Tony Award for Best Costume Design, and a nomination for Best Set Design. His iconic animations for the opening theme of the PBS show “Mystery!” in 1980 are still used today on “Masterpiece Mystery.” Beyond his own collective works, Gorey’s legacy and influence can be seen throughout pop culture phenomena today, through the likes of such contemporaries as Tim Burton, Lemony Snicket and Neil Gaiman.

Tickets for GOREY are $28-$40, and can be purchased at www.sheencenter.org. Student Rush tickets are $20, and can be purchased in-person one hour before showtime on the day of the performance, at the Sheen Center Box Office (18 Bleecker Street). The play is presented in the Sheen Center’s Black Box Theatre. GOREY played its world premiere at HERE from April 30-May 22, 2016 as part of the SubletSeries@HERE, at which time it was nominated for seven 2016 New York Innovative Theatre Awards.

ABOUT LIFE JACKET THEATRE COMPANY
Life Jacket’s mission is to create smart, original, and unpredictable theatre. The company produces investigative works based on real-life stories, often engaging with the people whose stories they tell. They experiment with new theatrical languages and forms in pursuit of visually inventive and lyrically rich works.

THE SHEEN CENTER
Named after the late Archbishop Fulton J. Sheen, best known for his popular radio and TV ministry in the 1950s and 60s, The Sheen Center for Thought & Culture is a project of the Archdiocese of New York with the mission of showcasing works in the performing and visual arts, lectures and symposia that highlight the true, the good, and the beautiful as they have been expressed throughout the ages. The state-of-the-art complex has a 274-seat proscenium theater equipped with five-camera high-definition livestream capability and a multi-track recording studio with thirty-two onstage inputs; an 80-seat black box theater; four rehearsal studios; and an art gallery. This facility is the newest arts center in Manhattan in 35 years and a great addition to the growing artistic community in the East Village/NoHo.

FOR THE FULL LISTING OF UPCOMING EVENTS OF THE 2016/2017 SHEEN CENTER SEASON VISIT:
www.sheencenter.org/events