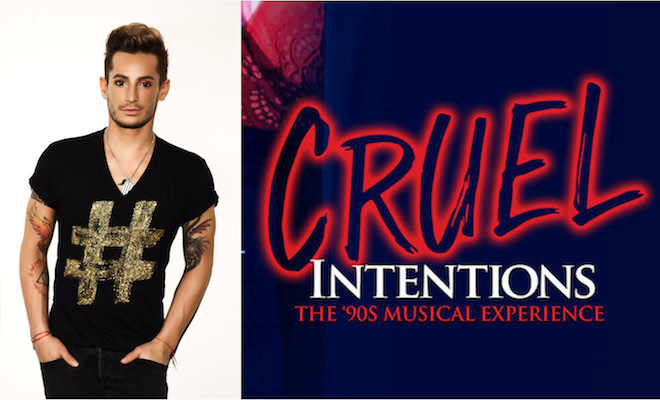 Known worldwide for starring in the hit CBS show “Big Brother” and “Celebrity Big Brother UK,” Frankie J. Grande began his Broadway career on stage in Mamma Mia!, and was most recently seen as Franz in the Tony-nominated hit musical Rock of Ages. Grande has served as co-host of Amazon’s fashion program “Style Code Live”, “Access Hollywood Live”, and the American Music Awards’ red carpet coverage for “Entertainment Tonight”. He was recently seen in Nickelodeon’s “Henry Danger”, and in 2015 had his own television special Worst.Post.Ever with Frankie Grande (Oxygen Network). Grande’s other stage credits include the Off-Broadway revival of Pageant, “Bobby” in a regional production of Crazy For You, and cabaret acts throughout New York City, including Birdland Jazz Club, 54 Below, and at the Laurie Beechman Theatre in his own show “Living La Vida Grande”. Grande’s credits as a Broadway producer include Hamlet starring Jude Law, La Bête starring David Hyde Pierce, and Born Yesterday starring Jim Belushi. He’s a founding member of the charity Broadway in South Africa, a global arts outreach group, and in 2014 was honored by buildOn with a Global Impact Award for his work building a school in a rural village in Malawi.

Following two sold-out runs in Los Angeles, the new musical nightlife experience CRUEL INTENTIONS – created by Jordan Ross, Lindsey Rosin & Roger Kumble – recently announced the third and final extension of its New York Premiere engagement, now playing through Sunday, April 8, 2018. The musical, which began as a ten-week run in November 2017, will now play twenty-one weeks by its conclusion. Due to demand from several presenters across the country, a national tour is now being planned, to launch in Fall 2018. Tickets for the final weeks of the NYC run are on sale now via CruelMusical.com.

Set to the greatest pop and rock hits of the ‘90s, CRUEL INTENTIONS is an exhilarating and deceptively funny new musical that pulls you into the manipulative world of Manhattan’s most dangerous liaisons: Sebastian Valmont and Kathryn Merteuil. Seduced by revenge and fueled by passion, the two diabolically charming step-siblings place a bet on whether or not Sebastian can deflower their incoming headmaster’s daughter, Annette Hargrove. As the two set out to destroy the innocent girl – and anyone who gets in their way – they find themselves entangled in a web of secrets, temptation, and the cruelest game of all: love. The first-ever theater production staged at (le) Poisson Rouge, complete with bar and table service, audience members are thrown into ‘90s euphoria as the intoxicating story unfolds around them, set to the greatest throwback hits of the decade by such artists as Goo Goo Dolls, No Doubt, R.E.M., Ace of Base, Jewel, ‘NSYNC and more – in addition to songs from the film’s iconic soundtrack such as “Bittersweet Symphony” by The Verve and “Colorblind” by Counting Crows.

The New York Times called the show “Funny and nostalgia-fueled! In this Cruel Intentions, high school schemers sing the best of the ‘90s… the choice lines and the inspired soundtrack hits are all there in this enjoyable show.” Vanity Fair’s Richard Lawson hailed, “I can’t believe how much I recommend the Cruel Intentions musical. It’s perfect nostalgia — sweet, silly, sincere… and genuinely joyous.” Entertainment Weekly raved that the musical “infuses the story of the original film with a soundtrack of guilty pleasure pop hits, making it the ultimate night out for those looking for a ’90s throwback.” Page Six’s Elizabeth Wagmeister said, “Run, don’t walk! This show is so much fun, and the talent is unbelievably exceptional,” and InStyle Magazine described the show as “Brilliant and Magical. It’s 110 minutes of pure ‘90s bliss. Top-notch performances by a supremely talented cast with stage chemistry that’s off the charts… This is one production that you do not want to miss.”

Roger Kumble’s film Cruel Intentions – a sexy, modern-day telling of the classic 1782 French novel Les Liaisons Dangereuses by Pierre Choderlos de Laclos – was produced by Neal Moritz and released by Columbia Pictures on March 5, 1999, starring Sarah Michelle Gellar, Ryan Phillippe, Reese Witherspoon, Selma Blair, Joshua Jackson, Eric Mabius, Sean Patrick Thomas and Christine Baranski. In addition to being an immediate box office hit, Cruel Intentions went on to carve itself a permanent spot in the pop culture lexicon. Rated the “#1 90s Teen Movie” by Buzzfeed and the “#1 Sexiest Thriller of All Time” by Bustle, Cruel Intentions is “still as enormously entertaining as ever” more than 15 years after its release, according to Entertainment Weekly, “thanks to an uncommonly sharp script, a killer soundtrack, and, most importantly, an impeccable cast.”

The show debuted at The Rockwell Table & Stage in Los Angeles in 2015, where it ran for 38 sold-out performances, before being remounted for a second sold-out run at LA’s Prospect Theatre in November 2016. In February 2017, the musical played a “pop-up” engagement at (le) Poisson Rouge, which was a sold-out smash success.

TICKETS
General admission tickets start at $39 for bar area, $59 for table seating, and $109 ‘Secret Society’ tickets which are in a reserved, premium seating location. All seated tickets require a 2-beverage or food minimum. Cruel Intentions is a 13+ show. Those under 18 can be admitted only if accompanied by a legal guardian. Tickets are on-sale via www.CruelMusical.com or can be purchased in person at the (le) Poisson Rouge box office (158 Bleecker Street) between the hours of 5:00-8:00PM Monday-Saturday.