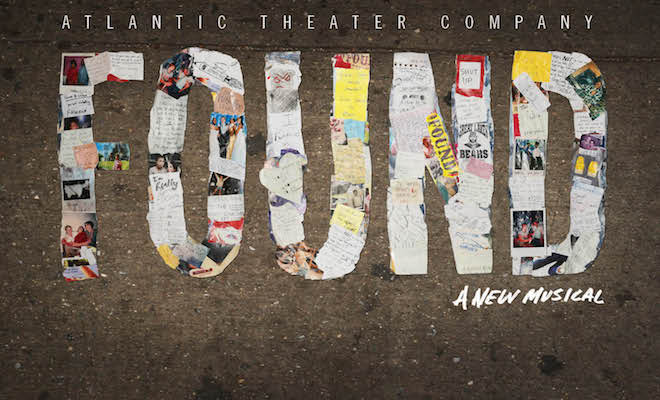 Atlantic Theater Company’s latest production is the exciting new musical, Found. Based on material from Found Magazine, the show is inspired by actual notes and letters written by every-day people. Producers boast, “Found isn’t just based on a true story… it’s based on hundreds of them.”

The show tells the story of three broke best friends who find a revealing note on the windshield of their car that is meant for someone else. This note gives them a wild idea that leads them on an exciting – and hilarious – journey.

With a book by Hunter Bell and Lee Overtree, Found is a raucous comedy that makes good use of its source material. This novel approach to writing the musical’s book is right up Hunter Bell’s alley. Bell is best known for writing the book to [title of show], for which he won the Drama Desk Award and was nominated for a Tony for Best Book of a Musical. His book for Silence! The Musical also garnered Bell quite a bit of notoriety, as the parody musical went on to delight audiences Off-Broadway for several years.

Music and lyrics for Found are written by Eli Bolin, who is best known for his work with Story Pirates, an arts education organization that is based in New York and Los Angeles. The show’s director and book co-writer Lee Overtree is co-founder and Artistic Director of Story Pirates as well.

The new musical features an ensemble cast that includes Barrett Wilbert Weed, who was last seen Off-Broadway as the lead in Heathers, and Betsy Morgan, last seen in the most recent Broadway revival of Les Miserables.

Found has been receiving quite a bit of good press with rave reviews from the New York Times, New York Magazine, and the New York Post. The Times’ Isherwood called Found “gloriously strange, delightfully weird, and cleverly hilarious! A lively, likable, and endearing new musical!” Time Out New York and the Daily News gave the show four stars.

← Previous Story THIS IS OUR YOUTH
Next Story → JOHN LENNON RETURNS!