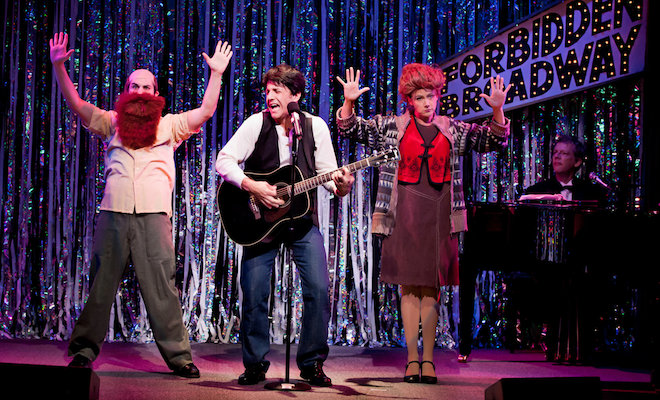 (New York, NY) – After a 10-month hiatus, Gerard Alessandrini’s FORBIDDEN BROADWAY, one of NYC’s best-loved and highly anticipated productions, happily returns to New York, at the newly refurbished Davenport Theatre (354 W. 45th Street, Between 8th and 9th Avenues) with FORBIDDEN BROADWAY; Alive and STILL Kicking, featuring brand new takes on the shows that opened in Forbidden Broadway’s absence: Pippin, Kinky Boots, Matilda and Motown along with highlights from last season’s acclaimed and very popular edition: Once, Evita, Newsies, Book of Mormon, among others. In a statement, Gerard Alessandrini said: “When we heard Les Miz was coming back for its third Broadway run, it was a wake-up call that it was time for us to resume. We just couldn’t rest in peace. So we’re picking up where we left off last April. And now feels like the perfect time to be back in New York: right in between seasons. There’s everything we didn’t get the chance to spoof last year, and a new avalanche of shows waiting to crash down on us. We’ll start with Pippin, Kinky Boots, Matilda and Motown, and as the season unfolds, we’ll add Rocky, Cabaret, Bridges of Madison County, Bullets Over Broadway, Aladdin, etc. Then we can officially open the new edition around Awards Season.”

The edition is created and written by Gerard Alessandrini, and directed by Phillip George and Mr. Alessandrini, with musical direction by David Caldwell. With lighting by Mark T. Simpson .The show is produced by John Freedson, Harriet Yellin and Paul Bartz, in association with Paul G. Rice, Carol Ostrow, Paxton Quigley and Robert Driemeyer,

Featured in the cast for FORBIDDEN BROADWAY: Alive and STILL Kicking, are

FORBIDDEN BROADWAY has been an unstoppable force in theatre since 1982, when Gerard Alessandrini created the first edition that lampooned the Broadway shows and stars of the day. It has been a favorite among theatre lovers, as well as the Broadway stars themselves (Carol Channing, Angela Lansbury, Patti Lupone, Stephen Sondheim, Raul Esparza, Tyne Daly, Christine Ebersole, Bernadette Peters, Whoopi Goldberg, Mike Nichols, and Hal Prince, to name a few) who often stop by to laugh at themselves alongside the public. FORBIDDEN BROADWAY has won numerous awards in its history including a Special Tony® Award as well as Drama Critics’ Circle, Obie, Drama Desk, Outer Critics Circle, Drama League, and Lucille Lortel Awards. Last season’s edition was named to Time Magazine’s 10 Best of the Year, and received a Drama Desk nomination for Best Musical Revue. A theatrical institution, FORBIDDEN BROADWAY has received national and international notoriety having performed in over 200 US cities as well as engagements in Tokyo, Singapore, Sydney and London’s Menier Chocolate Factory.

GERARD ALESSANDRINI (Creator, Writer & Director) is best known for writing and directing all the editions of Forbidden Broadway and Forbidden Hollywood in New York, Los Angeles, and London and around the world. He was also a member of the original cast of Forbidden Broadway. Gerard is from Needham, Massachusetts and the Boston area, where he graduated from the Boston Conservatory of Music. In 1982, he created Forbidden Broadway, which has spawned 21 editions, 9 cast albums and a record-breaking 32-year- run in New York. Television credits include writing comedy specials for Bob Hope and Angela Lansbury on NBC, Carol Burnett on CBS and “Masterpiece Tonight,” a satirical revue saluting “Masterpiece Theatre” on PBS. He can be heard on four of the eight FB cast albums and on the soundtracks of Disney’s Aladdin & Pocahontas. Directing credits include many corporate industrials and regional musicals, including a production of Maury Yeston’s musical In the Beginning. Gerard also co-directed a revival of Irving Berlin’s final musical Mr. President, which he updated & “politically corrected.” Gerard is the recipient of an Obie Award, an Outer Critics Circle Award, two Lucille Lortel Awards, a Lifetime Achievement Award from the Drama League and three Drama Desk Awards for Best Lyrics for Forbidden Broadway. He received the 2006 Tony® Honor for Excellence in the Theatre. Most recently his Madame X: The Musical won acclaim and multiple awards at the 2011 NYMF Festival; his holiday extravaganza The Nutcracker and I, written with Peter Brash was a smash at the George Street Theatre, and he is currently collaborating with Paul Mazursky and Bill Conti on a musical version of Mr. Mazursky’s film Moon Over Parador.

PHILLIP GEORGE (Director) is a director and writer. As director Off-Broadway: Shout!, The Road to Qatar (York Theatre Company), Forbidden Broadway Goes to Rehab, Forbidden Broadway SVU, Forbidden Hollywood, Whoop-Dee-Doo (Drama Desk Award, Best Musical Revue), Forbidden Broadway Twentieth Anniversary Edition, and many other editions of this infamous revue series. Along the way, Forbidden Broadway was also honored with a special Tony for long time achievement. He has also directed musicals in London, Los Angeles, Toronto, Boston, etc., with Forbidden Broadway transferring to the West End. With his longstanding collaborator Peter Morris, Phill also wrote Frankly Scarlett, which played at the Kings Head Theatre in London. In addition to his directing assignments, he is also one of the writers of High Hair and Jalapenos, which skewers all things Texas and is currently preparing for the fifth edition. When not directing and writing, Phill is on the staff of the American Musical and Dramatics Academy where he passes on some of the wisdom he acquired along the way. DAVID CALDWELL (Music Director) has been the music director of Forbidden Broadway since 2004. He composed music and lyrics for All I Really Need to Know I Learned in Kindergarten and Uh-Oh Here Comes Christmas, both based on the writing of Robert Fulghum. He also composed music for Fulghum’s novel Third Wish. He conducted the American premiere of Stephen Schwartz’s Children of Eden. He recently music-directed two shows in China, with Inner Mongolian authors and casts. He arranged and orchestrated Marvin Hamlisch’s new song “I’m Really Dancing” for Career Transitions for Dancers’ 25th Anniversary Gala, featuring Angela Lansbury, Chita Rivera and Bebe Neuwirth. His new show, Gotta Getta Girl, was featured in the NYMF Reading Series. He is interviewed at length in Oliver Sacks’ book about music and the brain, Musicophilia.

PHILIP HECKMAN (Costume Designer) is an Emmy-nominated costume designer for daytime television’s As the World Turns. He recently completed the New York run of My Big Gay Italian Wedding. Other Off-Broadway credits include SHOUT! The Mod Musical, Go-Go Beach, We’re Still Hot!, Are You There God? It’s Me, Ann-Margret, Marry Me A Little, I Love My Wife, Enough About Me and The Very Worst of Varla Jean Merman (Garland Award). Television credits include commercials, promos and shorts for LOGO, MTV, and VH1. Philip has also worked on several Broadway productions as a costume design assistant including Born Yesterday, The Boy From Oz, Chicago, Cry Baby, Democracy, Flower Drum Song, Follies, Frost/Nixon, The Graduate, Kiss Me Kate, Mamma Mia, Sideshow and Spamalot . Philip received his MFA in costume design from NYU’s Tisch School of the Arts.

The playing schedule for FORBIDDEN BROADWAY: ALIVE AND KICKING is as follows: Tuesdays through Saturdays at 8pm, Sundays at 7:30pm, with matinees on Wednesdays and Saturdays at 2pm. Tickets are $29-$79. Premium Tickets are available at $110.Tickets can be purchased by calling Telecharge at (212) 239-6200 or by visiting www.telecharge.com