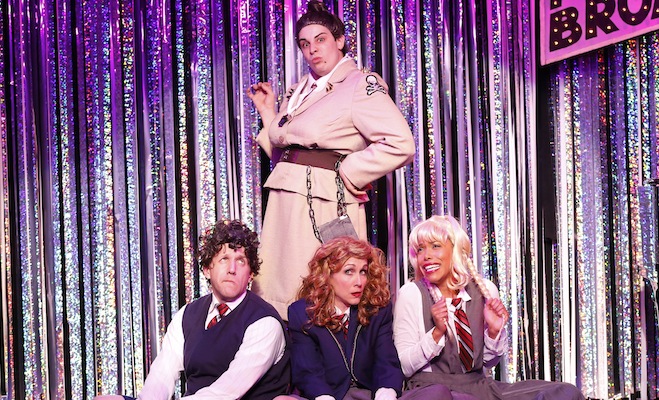 Forbidden Broadway is back!

Watch out Matilda!  Watch your back Book of Mormon!  Look out Pippen!  No Broadway show is safe this season!  Not with Forbidden Broadway: Alive and Still Kicking back in town!

This hilarious musical revue is the funniest Broadway send-up show ever to grace the Off-Broadway stage.  Forbidden Broadway features four massively talented singers and one showtune-slinging piano player, who keep the jokes flying and the audiences coming back for more.  With spot-on impersonations (last year’s Patti LuPone and Mandy Patinkin impressions had audiences rolling in the aisles) and cleverly crafted lyrics (written by show-creator Gerard Alessandrini), these performers tackle some of Broadway’s best – and some of Broadway’s worst!

Originating in 1982, Forbidden Broadway has been spoofing Broadway shows for over 30 years.  Each production provides a mix of classic showtune send-ups mingled with up-to-the minute show-stopping spoofs.  Classic shows featured in previous versions of Forbidden Broadway include The Lion King, Les Miserables, Annie, Phantom of the Opera, and Chicago.

Keep an eye out for some brand new shows to be spoofed in this latest version.  Forbidden Broadway: Alive and Still Kicking will be taking on some of the past years biggest hits, including Kinky Boots, Matilda, Pippen, and Motown The Musical.  But don’t fret if you missed the 2012-2013 production – some of last season’s hits will back as well (keep your eye out for a particularly hilarious send-up of the most recent production of Evita, as well as a Book of Mormon number worthy of the “South Park” boys themselves).

Located in the Davenport Theatre on 45th Street, Forbidden Broadway has set up shop right in the heart of it all.  But not to worry – they aren’t shy about making fun of their brand new neighbors.  This latest edition will be adding new numbers as some of this season’s hottest shows premiere.  So don’t panic if you’ve already seen (and loved) this show, because this edition will be as current and up-to-date as they come.  By the time the Tony Awards roll around in June, expect Forbidden Broadway to be tackling a whole slew of this year’s nominees and winners.

Side-splitting send-ups are already in the works for Woody Allen and Susan Stroman’s upcoming Bullets Over Broadway (based on the hit Woody Allen film), Disney’s latest stage adaptation of the children’s classic Aladdin, the mega-budget blockbuster Rocky (fingers crossed for a Sylvester Stallone impression), Roundabout’s second revival of Cabaret (featuring Alan Cumming and silver-screen star Michelle Williams), and the currently running Broadway hit Bridges of Madison County (based on the film starring Meryl Streep and Clint Eastwood).   With so many stars to impersonate, and so many new shows opening on Broadway this season, this latest Forbidden Broadway edition is poised to be the funniest incarnation yet.